Honoring the Service and Sacrifice of American Patriots 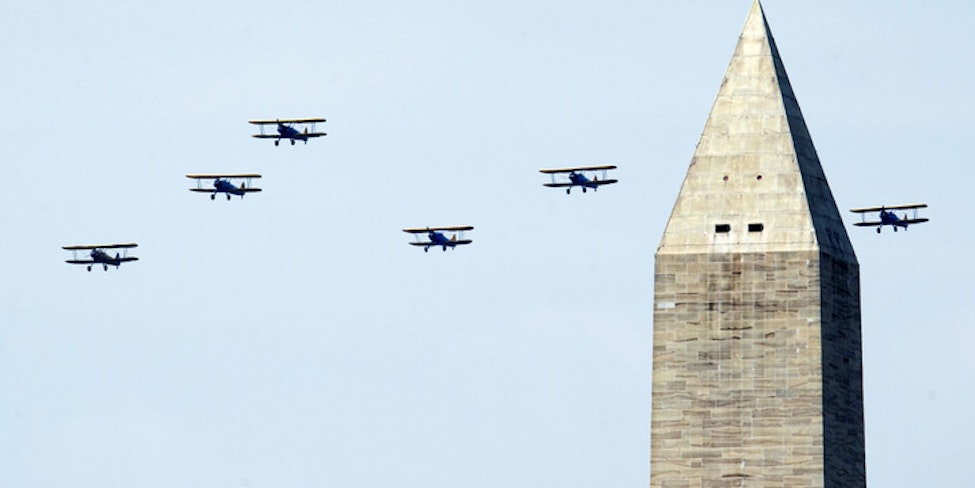 Your Patriot team necessarily devotes a lot of time and bandwidth to the analysis required for problem solving. That means more often than not, we must focus on what’s broken rather than what works well.

That has never been more true than now, under the reckless and feckless tenure of the current “Commander in Chief,” who has succeeded in reducing both our domestic and foreign standing to levels that make even Jimmy Carter’s “great malaise” look favorable.

In years past, the political discourse in DC was punctuated by occasional periods of acute acrimony, but now such discord is the new norm. The din of that rancor can, unfortunately, obscure our perspective of the enduring goodness of our nation, both historic and present.

Under this pall, I’m all the more grateful for those occasions when I can pause and take account of those things that are good and right with our great country.

This week, for example, we observe Armed Forces Day. Though it will receive nothing more from the White House than an obligatory proclamation, outside the Beltway, millions of Patriots offer due honor and respect for those Soldiers, Sailors, Airmen and Marines serving our nation.

After World War II, President Harry Truman called for the establishment of a designated day to recognize the extraordinary service and sacrifice of Americans in uniform. On 31 August 1949, Secretary of Defense Louis Johnson announced the creation of a unified Armed Forces Day to replace separate Army, Navy, Marine and Air Force observations. Three weeks earlier, the separate service branches were unified under the newly formed Department of Defense.

While The Patriot Post still observes and promotes the establishment dates for each of our military service branches, it is fitting that we devote the third Saturday in May in recognition of all military personnel.

So, please pause with me for a moment while I share a few personal observations about our Armed Forces, American Patriots who wear the uniforms of each service branches. 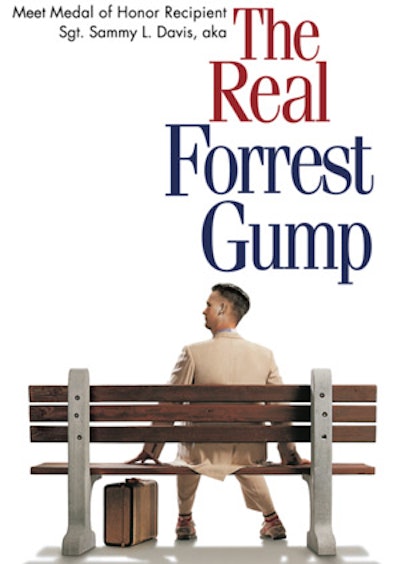 Two weeks ago, I was humbled to make a new friend in Sgt. Sammy Davis (USA Ret.). Sammy is better known as “The Real Forrest Gump” because his combat experience and the ridicule he was subjected to upon returning home was written into the popular film.

Sammy was awarded the Medal of Honor for his actions on 18 November 1967, in an area near Cai Lai in the Republic of Vietnam. While serving with Battery C, 2nd Battalion, 4th Artillery, 9th Infantry Division, then-PFC Davis was involved in heavy action during a night attack by a reinforced Viet Cong Battalion. During the action in which his squad fired a 105mm howitzer with beehive rounds directly into the enemy, Davis defended the gun position with a machine gun providing covering fire for his gun crew until an enemy recoilless rifle round scored a direct hit on the artillery piece, blowing the crew and Davis from their positions.

Davis returned to the scorched gun and began firing directly into the attacking enemy while ignoring his own safety. He was wounded again when an enemy mortar round exploded nearby. Although badly injured, Sammy returned to his position and continued firing until he had expended all rounds.

Then, after hearing calls for help from across the nearby river, Sammy, who was unable to swim because of his injuries, used a flotation device to get across the river, where he both defended and rescued three of his fellow soldiers, who were also badly wounded. Once back across the river, Sammy refused medical attention and returned to the fight, joining another howitzer crew until the enemy broke contact.

Sammy’s motto is, “You don’t lose until you quit trying.” And he never did quit. As is the case with all the Medal of Honor recipients I’ve met over the years, Sammy is a model of humility and civility (unless, of course, you mention the traitorous John Kerry or Jane Fonda). He embodies all that is good and right about America.

I ended that week at another military event chaired by a retired Vice Admiral submariner, who serves on The Patriot Post’s National Advisory Committee. That event featured our nation’s Chief of Naval Operations, Adm. Jon Greenert — yet another humble warrior.

Then last week, from Monday to Thursday, I took leave from my publishing deadlines in order to make an annual trek to the Air War College and join 225 graduate students from each of the service branches, who were completing the final week of their yearlong national security program. That forum concluded with a capstone address by Air Force Chief of Staff Gen. Mark Welsh, another humble warrior.

I wish I could introduce you to every one of the individuals I met at Maxwell AFB over those four days, as they embody the true spirit of American citizenship and patriotism. They are, without exception, men and women who honor their oaths “to Support and Defend” our Constitution with their lives.

But I was most impressed with the young military personnel with whom I crossed paths between seminars and lectures. Most of these young Patriots were barely out of high school, yet they exemplified a level of conduct and professionalism that seemed far beyond their years. Most memorable among the young folks was an airman I met in the parking lot at base housing. He had served five years in the enlisted ranks before obtaining his college degree, and was preparing to be commissioned a 2nd Lieutenant the next morning. He talked of his years with both humility and pride. 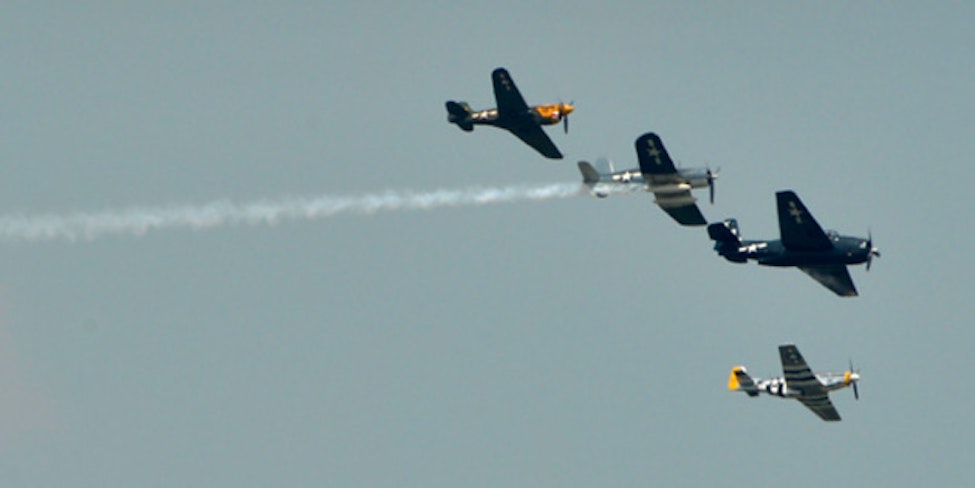 After a few long days, I returned home last Friday in time to fly to DC for the 70th Anniversary of V-E Day. I was accompanied by a couple of my favorite WWII vets — my Dad (age 92, USN Aviator who left Dartmouth in ‘43 for the war) and his younger brother Bob (age 90, USA Field Artillery, who left Princeton in '44 for the war). Their younger brother Bill, now an 88-year-old former Marine, was not able to make the trip.

These men embody every aspect of the Greatest Generation.

In Washington, we joined thousands of WWII vets on the Mall for the largest War Birds flyover ever — including a couple of F4U Corsairs — my father’s old plane. That flyover concluded, fittingly, with Taps and a missing man formation.

Before flying back out of Dulles, we had time to stop by the Air and Space Annex where my father posed for a picture under his old Corsair. The last time I was there with him was 10 years ago, when he posed under that plane with his WWII wingman, Ted Chandlee (RIP). After the War, my father married his wingman’s sister — so I have a special connection to Naval Aviation!

Back home for a few days rest and then, Tuesday morning of this week, we put our son on a flight — and will not see him again until mid-July, when he is scheduled to graduate from Marine Officer Candidates School at MCB Quantico, Virginia.

All in all, over the last two weeks I have been saturated with the company of Patriots young and old, all of whom share an undivided love for our country and devotion to Liberty. They embody these sentiments of George Washington in his Farewell address: “The name of American, which belongs to you, in your national capacity, must always exalt the just pride of Patriotism, more than any appellation derived from local discriminations.” 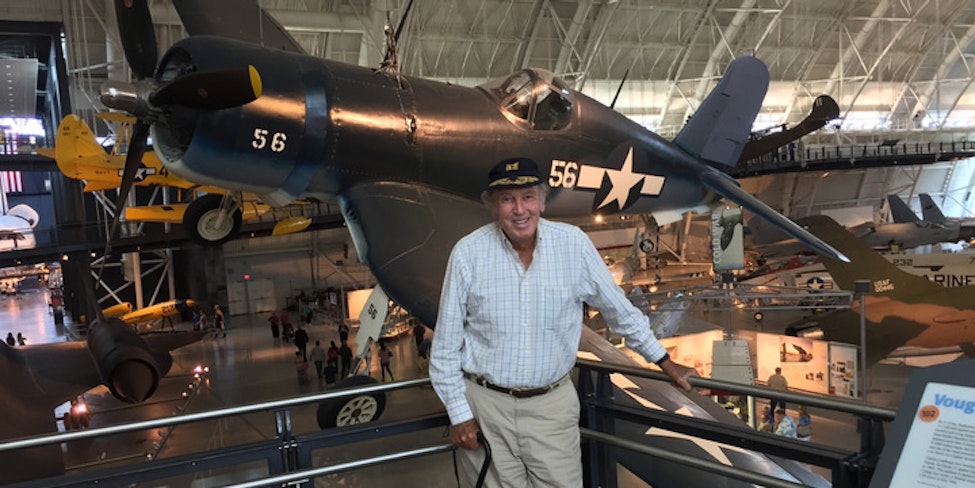 And likewise, they embody the hope we have for our future, as expressed in these words from Ronald Reagan: “Whatever else history may say about me when I’m gone, I hope it will record that I appealed to your best hopes, not your worst fears, to your confidence rather than your doubts. My dream is that you will travel the road ahead with Liberty’s lamp guiding your steps and Opportunity’s arm steadying your way. My fondest hope for each one of you — and especially for young people — is that you will love your country, not for her power or wealth, but for her selflessness and her idealism. May each of you have the heart to conceive, the understanding to direct, and the hand to execute works that will make the world a little better for your having been here. May all of you as Americans never forget your heroic origins, never fail to seek divine guidance, and never lose your natural, God-given optimism. And finally, my fellow Americans, may every dawn be a great new beginning for America and every evening bring us closer to that shining city upon a hill.”

Fellow Patriots, let us thank God for our great nation every day, and especially for those Patriot citizen soldiers who stand ready to defend it. This Armed Forces Day, find someone who is in uniform, or one of their family members, and tell them “Thank You!”