Were Capitol Police Officers set up and then abandoned?

The Senate released its 127-page “bipartisan report” on the January 6th Capitol protest, some of which devolved into violent confrontations between U.S. Capitol Police (USCP) and rioters. The report lays most of the blame for unpreparedness on the USCP, which is not where most of the responsibility should be placed.

Until that report was released yesterday, here is what we have known to be the indisputable truth about that protest, and how Democrats did what they do best — used it as political fodder to advance their statist agenda.

On that unfortunate January day, after former President Donald Trump held a rally down the road, some outlying miscreants at that rally, spurred on by conspiracy theory luminaries, unlawfully entered the Capitol building to disrupt the Electoral College process. A few of those protesters tangled with police, but most trespassed in the building without causing harm or damage.

As I noted in my original analysis regarding this shameful incident, the reason Capitol Police were not prepared for that fringe mob is that all law enforcement agencies expected Trump rally attendees to act like they always had previously — with civility and respect. There was little reason to believe that some fraction of 1% of those attending the Trump rally would resort to the riotous thuggery that is otherwise associated with “peaceful” leftist protests. Heretofore, that has been the modus operandi of the leftist so-called “Black Lives Matter” Marxists and their like-minded “antifa” fascists.

Unlike the wake of murders from all the violent leftist protests across the nation in the last year, we know there was only one fatality connected with the Capitol riot — that of an unarmed Air Force veteran named Ashli Babbitt, who was shot dead by a Capitol Police officer. And unlike all police-involved shootings across the nation, there has been no further public investigation of what, arguably, appears to be a wholly unjustifiable shooting — yet. Babbitt’s family has filed suit to determine the identity of the officer who killed her, as well as the circumstances leading to that lethal use of force. (If it turns out that a black USCP officer killed an unarmed white woman, that will take on broader implications regarding the Biden administration’s concealment of the investigation.

There was one other death of an officer who was at the Capitol building during the riot — that of Brian Sicknick, a Trump supporter. His death was widely claimed to be the result of the riot. It turns out those reports were fabricated by The New York Times and repeated by CNN and all their Leftmedia parrots downstream. In fact, we now know that Officer Sicknick died of “natural causes” a day after the riot.

But his autopsy report was not made public until three months after Officer Sicknick’s death, giving Rep. Nancy Pelosi (D-CA) and Sen. Chuck Schumer (D-NY) plenty of time to fabricate their narrative for the post-presidential impeachment monkey trial of Trump. They desecrated Officer Sicknick’s service and death by using it as political fodder for their impeachment charade.

We know that the gross Pelosi/Schumer double standard demonstrated by their response to the Capitol riot versus the previous six months of riots across the nation was the height of hypocrisy. And that disparity includes the arrest and incarceration of Capitol protesters versus the Democrats’ disinterest in bringing to justice thousands of violent rioters across the nation — some of whom committed murders.

We know that to bolster their theatrical production, Demos turned our nation’s capital into what looked like a third-world dictatorial defense against a coup d'état, even activating the National Guard for no other reason than to serve as props for Demo theatrics. On their watch, however, a Capitol Police officer was murdered and another officer wounded — by a black Islamist assailant.

We know that the Republicans wisely blocked the formation of Pelosi’s “9/11 type commission,” which she was going to use to keep the Capitol riot front-and-center from now until the 2022 midterm elections. Her comparison of the Capitol incident to what actually happened as a result of the 9/11 Islamist attack on our country in 2001 is inexcusable.

Of course, we know that Joe Biden has used the Capitol riot as fodder for insisting, as he trumpeted in his joint address to Congress, that “the most lethal terrorist threat to the homeland today is from white supremacist terrorism.” He repeated that race-bait rhetoric again this week in Tulsa, where he used the anniversary of a racial attack 100 years ago to promote the Demos’ race-hustling agenda.

Biden’s deluded reference to white supremacists and right wing extremists is a thinly-veiled labelling code for Trump’s base.

There has been a succession of administrative actions to bolster this phony “white supremacist” narrative.

Biden ordered Defense Secretary Lloyd Austin to issue a 60-day stand down to search for extremists in the military. Attorney General Merrick Garland marked the anniversary of the Oklahoma City bombing by declaring, “The Department of Justice is pouring its resources into stopping domestic violent extremists before they can attack.” Director of National Intelligence Avril Haines pushed out a “threat assessment” that was focused on “white extremism.” DHS Secretary Alejandro Mayorkas ordered an internal review of “threats” within the department and parroted Biden’s line, saying, “Domestic violent extremism poses the most lethal and persistent terrorism-related threat to our country today.”

Astoundingly, no sooner had the CDC announced relaxed restrictions on Americans who had been vaccinated than Biden’s political puppets at DHS issued a report that absurdly asserted, “Violent extremists may seek to exploit the easing of COVID-19-related restrictions across the United States to conduct attacks against a broader range of targets after previous public capacity limits reduced opportunities for lethal attacks.” The warning added that extremists would “exploit constitutionally protected freedom of speech” in order to fuel violence based on “false narratives.”

Actually, the only redlining of freedom of speech, in violation of the First Amendment civil rights of all Americans, is being perpetrated by the Democrats.

So, all the theatrics aside, what have we learned from the Senate report? 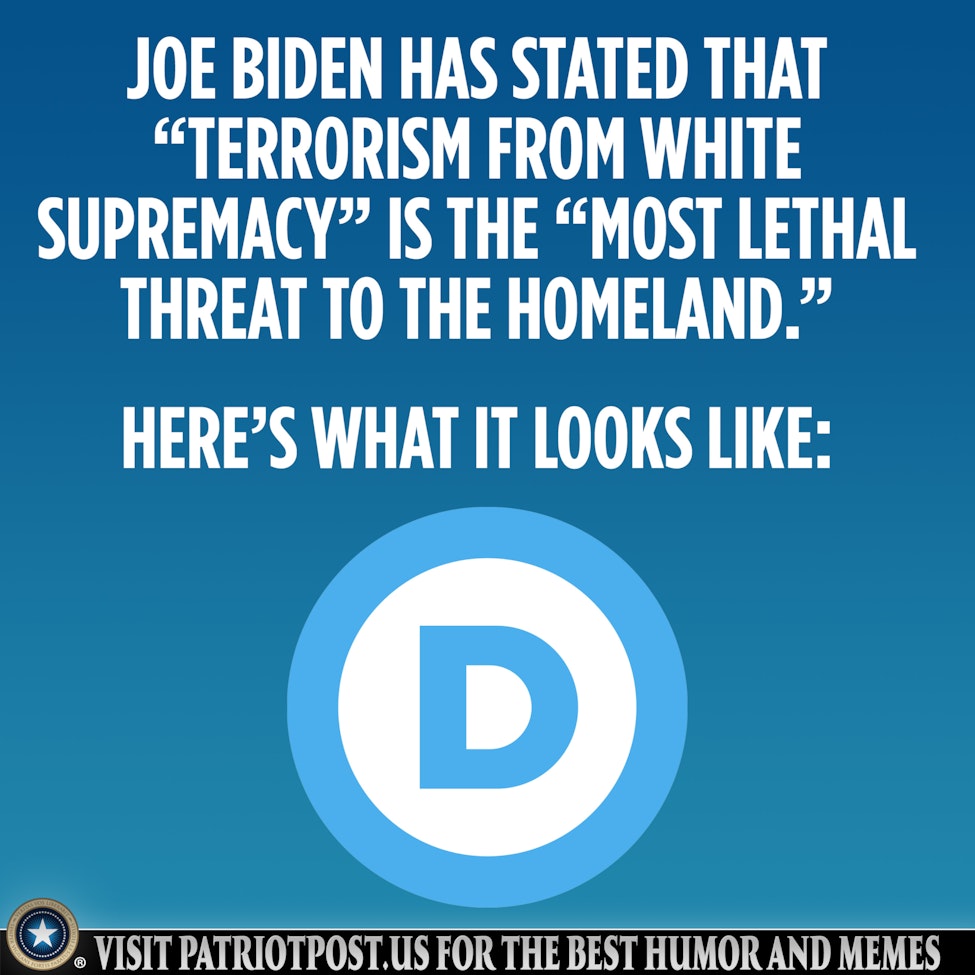 Regarding preparedness, the report notes: “DOD’s response to January 6 was informed by criticism it received about its response to the civil unrest after the death of George Floyd during the summer of 2020. DOD was criticized for its heavy-handed response, particularly flying military helicopters over the protests in summer 2020.” The report adds, “DOD officials cited lessons learned from the summer 2020 as guiding its decision-making for January 6. DOD officials believed it needed ‘control measures’ and ‘rigor’ before deploying DCNG personnel, including a clear deployment plan to avoid the appearance of overmilitarization.”

In other words, the Demos’ protection of rioters in the months since George Floyd’s death — those burning, looting, and murdering ostensibly in support of the Demos’ fabricated “systemic racism” agenda — served to suppress riot preparations ahead of the January 6 protest.

Thus, there was no preparation despite this revelation from the report: “Through open-source collection, tips from the public and other sources, [police] knew about social media posts calling for violence at the Capitol on 6 January, including a plot to breach the Capitol, the online sharing of maps of the Capitol complex’s tunnel systems, and other specific threats of violence.”

We learned that leftist D.C. Mayor Muriel Bowser refused federal assistance, insisting, “Metropolitan Police Department (MPD) is prepared for this week’s First Amendment activities.” After the riot, she pulled a blame-shift maneuver, saying, “I think a more robust presence on the ground” would have maintained order.

The report determined that “USCP leadership never took control of the radio system to communicate orders to front-line officers.” Indeed, one officer who suffered injuries testified: “I was horrified that NO deputy chief or above was on the radio or helping us. For hours the screams on the radio were horrific, the sights were unimaginable and there was a complete loss of control. … For hours NO Chief or above took command and control. Officers were begging and pleading for help for medical triage.”

Another officer said: “We were ill prepared. We were NOT informed with intelligence. We were betrayed. We were abandoned by ALL the deputy chiefs and above that day. We still have not been told where exactly the chiefs were that day and what their [role] was on the sixth.”

Recall that in an April report by the Capitol Police Inspector General, it was determined that senior officials told the officers to restrain any use of force. Almost sounds like the officers were set up and then abandoned.

Capitol Police “acknowledged it must improve how it collects and shares intelligence with its own officers and stakeholders and has made significant changes since the attack on January 6,” the USCP said in a statement responding to the report. “Neither the USCP, nor the FBI, U.S. Secret Service, Metropolitan Police or our other law enforcement partners knew thousands of rioters were planning to attack the U.S. Capitol. The known intelligence simply didn’t support that conclusion.”

In other words, as I originally asserted back in January, “The reason Capitol Police were not prepared for that fringe mob is that all law enforcement agencies expected Trump rally attendees to act like they always had previously — with civility and respect.” And I provided that assessment for free!

So, what will we learn further from the report? That Democrats will use it as political fodder to advance Biden’s “white supremacist” threat agenda to label Trump’s base as extremist.

Of course, the real extremist threat is, as it has been, from the Left.