The FBI scolds Clinton and then gives her a free pass. 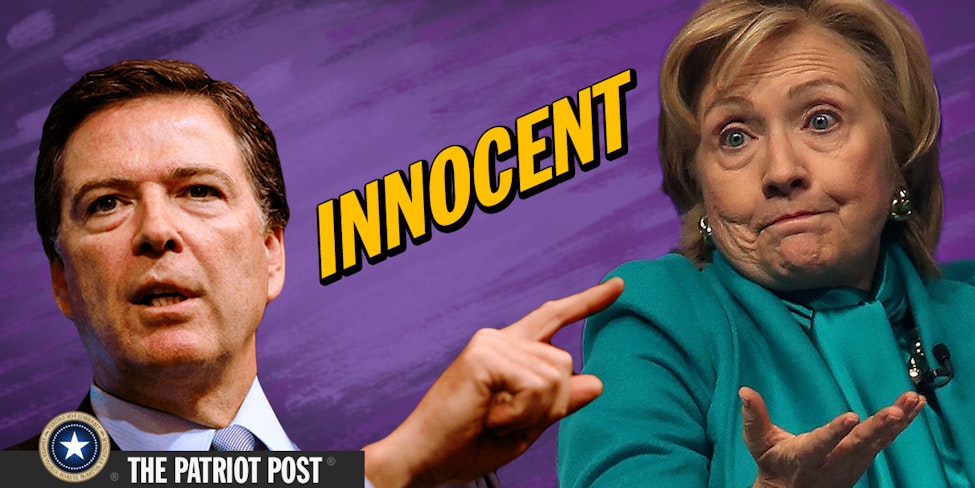 In one of the more predictable if inexplicable decisions in the history of the FBI, Director James Comey announced Tuesday that there would be no charges against Hillary Clinton for violating federal law with her unsecured private email server. No wonder Barack Obama gave Clinton a ride on Air Force One later the same day to campaign together.

Given Bill Clinton’s clandestine meeting with Attorney General Loretta Lynch last week, Comey began by countering the obvious objection: “I have not coordinated or reviewed this statement in any way with the Department of Justice or any other part of the government. They do not know what I am about to say.” Forgive us if we find that hard to believe. Think Air Force One would be in play if she were about to be indicted?

Among the FBI’s findings:

She lied on multiple occasions denying this fact.

Comey said Clinton “should have known” her unsecured private email system (there were actually multiple servers) was not the place for this information. He also noted, “Only a very small number of the emails containing classified information bore markings indicating the presence of classified information. But even if information is not marked ‘classified’ in an email, participants who know or should know that the subject matter is classified are still obligated to protect it.”

She lied on multiple occasions insisting she had turned over everything not “personal” in nature, but Comey said investigators found “no intentional misconduct” in the sorting process.

Comey concluded by saying, “Although there is evidence of potential violations of the statutes regarding the handling of classified information, our judgment is that no reasonable prosecutor would bring such a case.” Therefore, “although the Department of Justice makes final decisions on matters like this, we are expressing to Justice our view that no charges are appropriate in this case.”

Yet in perhaps the most damning statement he made, he conceded there’s a different standard at play: “This is not to suggest that in similar circumstances, a person who engaged in this activity would face no consequences. To the contrary, those individuals are often subject to security or administrative sanctions.” Laws are for the little people.

He claimed there was insufficient evidence of malicious “intent,” but, as he had already explained, intent isn’t the primary consideration — she broke the law. In any case, Clinton’s intent was clear: She wanted to avoid political accountability. And in deliberately setting up a private server as her sole method of email, she clearly intended to communicate with it — even sending and receiving classified information.

Furthermore, as former DOJ prosecutor Andrew McCarthy argues, “Hillary Clinton checked every box required for a felony violation of Section 793(f) of the federal penal code (Title 18): With lawful access to highly classified information she acted with gross negligence in removing and causing it to be removed from its proper place of custody, and she transmitted it and caused it to be transmitted to others not authorized to have it, in patent violation of her trust. Director Comey even conceded that former Secretary Clinton was ‘extremely careless’ and strongly suggested that her recklessness very likely led to communications (her own and those she corresponded with) being intercepted by foreign intelligence services. Yet, Director Comey recommended against prosecution of the law violations he clearly found on the ground that there was no intent to harm the United States. In essence, in order to give Mrs. Clinton a pass, the FBI rewrote the statute, inserting an intent element that Congress did not require.”

There are essentially three possibilities: 1. Comey simply lacked the stomach to recommend the indictment of a presumptive presidential nominee in an election year. 2. Contrary to his assertions, his recommendation was indeed coordinated or reviewed by political hacks at the “Justice” Department. 3. Comey concluded Hanlon’s razor was at play: “Never attribute to malice that which is adequately explained by stupidity.” And thus a prosecution would be hard to win, which might look worse than not bringing charges at all. In any case, as far as we can tell, Clinton is getting away with breaking the law, and it appears to be par for the course in Obama’s America.

P.S. Here’s a rundown of some of Clinton’s lies compared to Comey’s findings.

Who Is Really Controlling What News You See?

Is Ukraine an American Priority?

“It is a common observation here that our cause is the cause of all mankind, and that we are fighting for their liberty in defending our own.” —Benjamin Franklin (1777)