“Conservatives push to discredit Facebook, Twitter and Google just days before the election,” read CNN’s headline this weekend. Got that? The issue isn’t that social media giants are suppressing conservative speech. It’s that conservatives are “discrediting” social media. Feel free to laugh out loud.

Of course, it’s no secret that social media giants Twitter and Facebook are actively working to suppress conservative free speech. Recent examples include the New York Post’s tweet about Hunter Biden and Facebook’s ludicrous takedown of satirical publisher The Babylon Bee. These mainstream publications have made some progress in gaining justice for the suppression of their speech, but only because they have loud voices and deep pockets. What about those of us at the grassroots level?

As your Digital Media Manager, I’ve been behind the wheel, navigating our publication through the turbulent waters of social media “Community Guidelines” and “Independent Fact-Checkers.” Like many other conservative voices out there, we’ve had our own scuffles with the big guys. But the most recent one has really pushed me over the edge.

On October 17, we were informed by Facebook that we had shared “false information” when we posted our accurate story about Joe Biden’s tax plan. As a result, our content is now being throttled and our ability to promote our publication has been taken away. This is because we are now considered “repeat offenders,” having allegedly shared several posts that went against Community Guidelines. 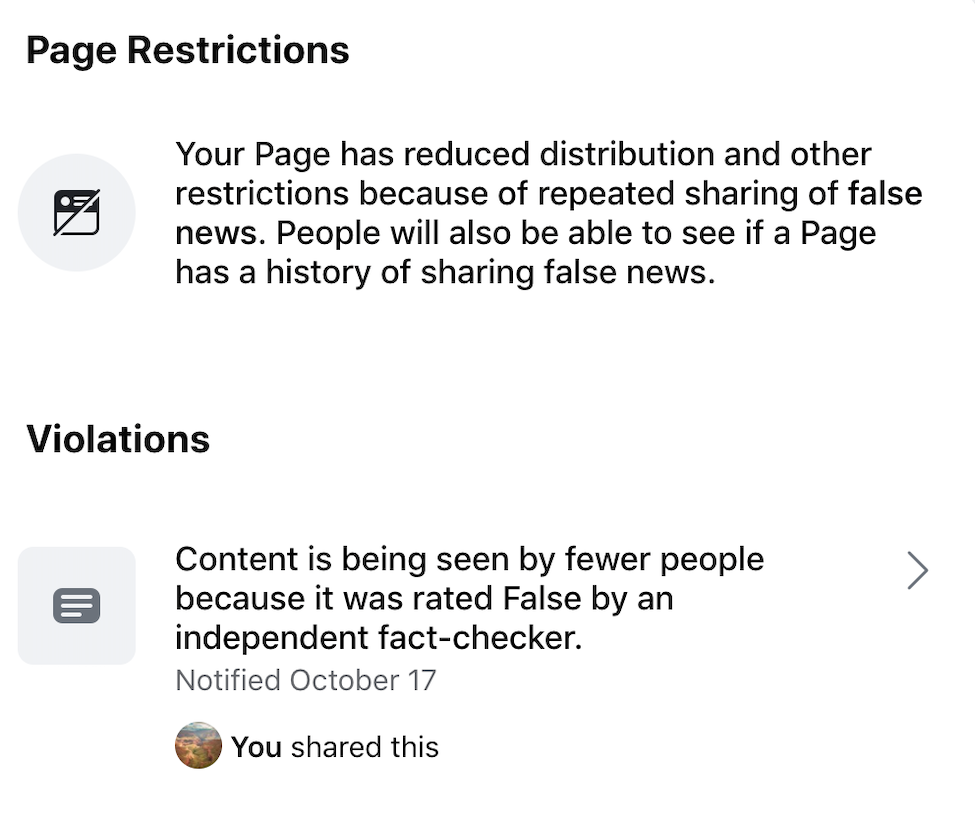 Facebook does allow users to contest this sort of thing, but the process is difficult — by design. For one thing, there’s no way to take it up with Facebook directly. Users must appeal to the independent fact-checker (or checkers if more than one rated a post). For another, if your post wasn’t the exact one a fact-checker flagged, you have no recourse. This is because Facebook can “use technology to identify near-identical versions across Facebook and Instagram” and “then label and reduce the spread of this content automatically.” Its rules state that “because these near-identical copies were not directly rated by fact-checking partners, fact-checkers can not process appeals or corrections for this content.”

In short, a robot decides whether your post fits the bill of being “false information” and then becomes judge, jury, and executioner on the spot. When the robots get it wrong, there’s nothing you can do but take the punishment on the chin.

Nevertheless, I still followed the instructions and reached out to Lead Stories, the fact-checker in question for this takedown, to contest the ruling. At this time I have not received a reply from Lead Stories, but interestingly, it appears that the false information label has been removed from our post. Of course, our page is still suffering from reduced distribution and we remain unable to promote ourselves on Facebook, so whether my letter had any effect is yet to be seen. If anything, it’s just a greater confirmation of how broken the “fact-checking” system really is, even beyond the reality that it’s actually opinion-checking.

Indeed, I should note that this has happened to us several times, and in nearly every instance our posts have been flagged for petty or downright untrue comparisons with other posts. In the months and weeks leading up to the election, the assaults have only increased.

Meanwhile, for over three years, major news networks such as CNN, The New York Times, and other Leftmedia news outlets published a patently false narrative about Trump/Russia collusion without a peep from the fact-checkers on major social media platforms. That’s no wonder, with fact-checker organizations such as USA Today holding the keys to the Facebook kingdom.

Finally, as Mark Alexander notes regarding social media collusion with Democrats: “After record growth in recent years, our Patriot Post traffic on Facebook suddenly and precipitously dropped by more than 80%. We can tie this drop to the day Facebook’s manipulation of algorithms began suppressing the organic reach of our content, also known as ‘shadow banning.’ This isn’t a matter of speculation; it’s a matter of fact. And consider the Twitter blackout of the Hunter Biden emails tying Joe Biden directly to a pay-for-play scheme with the ChiComs.”

Alexander concludes, “In the real world, we are entitled to confront an accuser in order to seek justice. In the social media world of ‘fact-checkers,’ there is no such justice. Bias rules.”