Andrew Cuomo Is Taking on Water

New York’s governor is finally being exposed for the nasty, buck-passing, and deceitful boss that he is.

If nothing else, Andrew Cuomo can say he outlasted the Andrea Doria.

On July 25, 1956, the ill-fated Italian ocean liner struck an eastbound ship in the North Atlantic some 300 miles from New York. She listed for 11 hours before capsizing and taking 46 souls with her.

Cuomo, New York’s Emmy Award-winning governor, is himself listing. And his actions have caused the unnecessary loss of countless of his state’s elderly citizens. But he’s battened the hatches, and he’s withstood a full week of long-overdue abuse since being caught trying to cover up the true death toll caused by his lethal policy of shoving the state’s coronavirus-positive elderly folks back into nursing homes, where the deadly contagion spread unchecked.

Some 15,000 long-term care residents have died in New York — nearly double the 8,500 previously disclosed by Cuomo and his team. And last week, his top aide, Melissa DeRosa, committed what we refer to in politics as a gaffe — which is to say, an accidental telling of the truth — when she apologized on a conference call with fellow Democrats about having refused to release the actual death count due to their fear of Donald Trump using the information against Cuomo.

“Basically, we froze,” she told the lawmakers on the call, because “the dog ate our homework” seemed somewhat evasive.

Finally, though, even Cuomo’s longtime lickspittles on the Left are getting sick of him. CNN, somewhat late to the party, announced that it’ll no longer allow Andy’s brother Chris to cover him anymore — which is a low-down dirty shame, because they had such a sweet comedy schtick going. 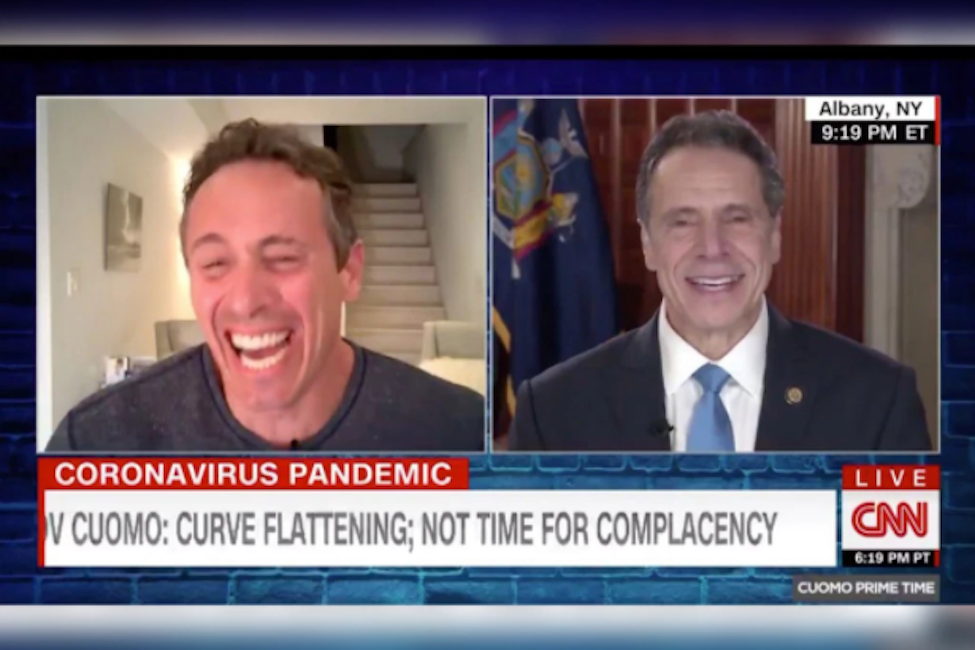 “The early months of the pandemic crisis were an extraordinary time,” CNN says in its CYA statement, which it released to The Washington Post but apparently no one else. “We felt that Chris speaking with his brother about the challenges of what millions of American families were struggling with was of significant human interest. As a result, we made an exception to a rule that we have had in place since 2013 which prevents Chris from interviewing and covering his brother, and that rule remains in place today.”

And then the kicker: “CNN has covered the news surrounding Governor Cuomo extensively.”

How bad has it gotten for the eldest son of Hamlet on the Hudson? Even Sandy Cortez is now calling for an investigation.

“More lies are a possibility,” writes Bob McManus in the New York Post, “although even his own party seems to have had enough of them. Democratic Attorney General Letitia James just blew a whistle on the nursing-home coverup — and there’s talk in the veto-proof Legislature of rescinding Cuomo’s pandemic emergency powers as a rebuke. Cuomo could man up, ditch a couple of toady staffers… But this isn’t a straight-arrow governor. He prefers political bribery and bullying to candor and conciliation; his lodestar is expedience, and he is a master at reading a political chessboard. So expect a purely political, wholly self-serving response.”

Happily for those of us on the side of decency, the feds appear to have taken an interest in all this. According to The Albany Times Union, “The FBI and the U.S. attorney’s office in Brooklyn have launched an investigation that is examining, at least in part, the actions of Gov. Andrew M. Cuomo’s coronavirus task force in its handling of nursing homes and other long-term care facilities during the pandemic. … The probe by the U.S. attorney’s office in the Eastern District of New York is apparently in its early stages and is focusing on the work of some of the senior members of the governor’s task force.”

If ever there were a case of bad things happening to a bad person, this is it. Cuomo, when he’s under fire, tends to be both sanctimonious and utterly unrepentant — even ugly. His recent behavior toward New York Assemblyman Ron Kim, a progressive Democrat, is a case in point. Kim says he was “bathing his children at home” when Cuomo “called me directly on Thursday to threaten my career if I did not cover up for Melissa [DeRosa] and what she said. He tried to pressure me to issue a statement, and it was a very traumatizing experience.”