Our nation’s 44th president shows that no lie is beneath him.

When Barack Obama tried this week to blame the recent rise in anti-Semitism on Donald Trump, we couldn’t help but recall what former Nebraska Senator Bob Kerrey said about an earlier Democrat president: “Clinton’s an unusually good liar.”

Obama, too, is an unusually good liar. Or maybe not, depending on whether our standard is one of volume or believability. Because if it’s the latter, then Obama is as he was a president: a mediocrity. Still, this most recent whopper, while not in the league of his legendary and oft-repeated ObamaCare lie, is worth debunking, because a lie unchallenged tends to become the truth.

In an interview with Jewish Insider, Obama recalled a 2016 speech he delivered at the Israeli Embassy in Washington. “I said that the seeds that gave rise to the Holocaust have always been with us,” Obama said. “They have found root across cultures, faiths, and generations. And they have reemerged again and again, especially in times of change and uncertainty.”

That’s when it went off the rails. He added, “When I gave that speech, it was clear that anti-Semitism was on the rise around the world. People’s anger over everything from immigration to inequality was boiling over — and many of them were looking for someone else to blame. And for four years, we had a President in the White House who fanned those flames.”

So Trump “fanned the flames” of anti-Semitism?

That’s a deadly serious charge. So let’s start with Donald Trump, the man with the Jewish daughter, the Jewish son-in-law, and the Jewish grandchildren; the man who moved our nation’s embassy in Israel from Tel Aviv to Jerusalem when all prior U.S. presidents merely paid lip service to the audacious idea; the man who tore up the Obama administration’s rotten Iran nuke deal, the deal that Israeli Prime Minister Benjamin Netanyahu called “a historic mistake” and “the worst danger we face” as a nation; the man who became the first sitting U.S. president to visit the Old City of Jerusalem; the man about whom Netanyahu said in 2019, “Israel has never had a better friend than you.”

We might finish our defense of our 45th president by observing that if he were stirring up such anti-Semitic sentiment, then Jewish Americans sure had a strange way of showing their displeasure. In the 2020 presidential election, Trump earned 30% of the Jewish vote, a 4% gain from his 2016 total and the best performance by a Republican president since George H.W. Bush in 1988.

As for Barack Obama, his two terms as president saw a decided decay in U.S.-Israel relations. As Matthew Kassel of Jewish Insider reports, “During his time in office, former President Barack Obama maintained something of a hot-and-cold relationship with Jewish leaders. … He frequently found himself at odds with communal leaders who took issue with, among other things, his administration’s support for the nuclear deal with Iran as well as the controversial decision to abstain from voting on a U.N. Security Council resolution castigating Israel.”

What’s most telling, though, about Obama’s written interview with Jewish Insider is the fact that he answered just five of the 13 questions that were put to him. And these were questions based on what he’d written in his latest memoir, a 768-page, $45 doorstop titled A Promised Land. So what’s he afraid of? He’s no longer in office, no longer in need of whispering sweet nothings into then-Russian President Dmitry Medvedev’s ear about how he’d have “more flexibility” to sell out his country and its NATO allies on missile defense as soon as he got through his 2012 reelection campaign.

Obama jumped at the chance to smear Trump in the interview, but he wouldn’t answer questions about the Iran nuke deal or his abject failure to support that country’s nascent Green Revolution; his administration’s disgraceful decision to abstain from UN Security Council Resolution 2334, which condemned Israel for its settlements in disputed territories; or the Trump administration’s Abraham Accords, the landmark normalization of relations between Israel and its Arab neighbors in the United Arab Emirates, Bahrain, Morocco, and Sudan.

Again, what’s he afraid of?

One possibility is his party’s unmistakably anti-Semitic drift, as embodied by Jew haters such as Congresswomen Omar Ilhan and Rashida Tlaib. “In this Democrat Party, the proverbial handwriting is on the wall — and has been for quite some time,” as our Arnold Ahlert recently wrote. “In 2012, the effort to reinstate the recognition of Jerusalem as Israel’s capital into the party’s platform during its National Convention was met with a literal chorus of boos. A poll released three years ago revealed that since 2001, the share of Democrats sympathizing more with Israel had declined 11 points, from 38% to 27%. Democrats, especially those who inhabit the Black Caucus, have repeatedly met with and refused to condemn rabid anti-Semite Louis Farrakhan.”

Ah, Louis Farrakhan. The guy who said “Hitler was a very great man.” The guy who said, “I’m not an anti-Semite. I’m anti-termite.” This guy — the guy standing shoulder-to-shoulder with a smiling Barack Obama: 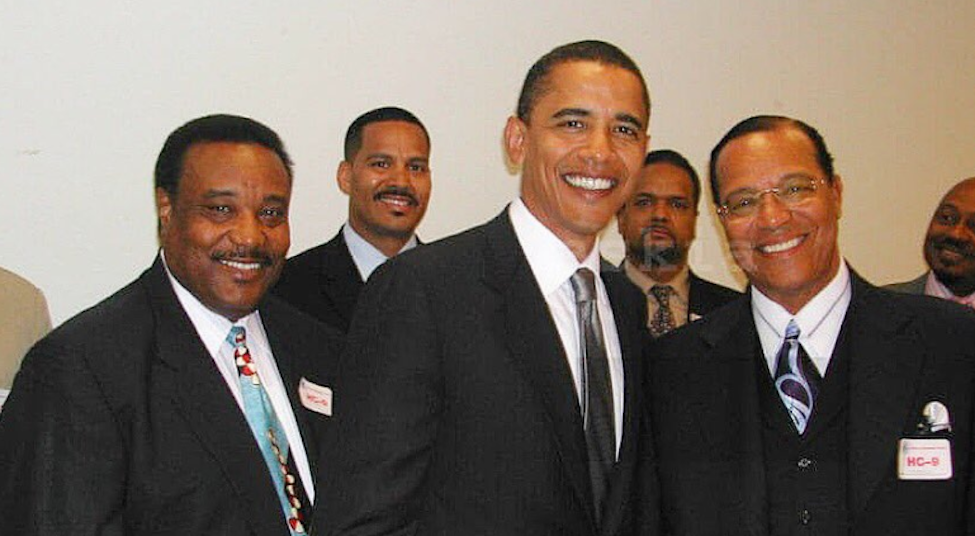 Sometimes a picture really is worth a thousand words.