Jobs are coming back far faster to Republican-led states around the country.

The high-level message within the GOP’s recent economic analysis is pretty simple, pretty straightforward: Republican-led states are bringing back the jobs. And Democrat states? Not so much.

Exhibit A is a chart showing how well each of the 50 states has done at recovering the jobs it lost during the pandemic. Leading the way is Utah, which has recovered 115.9% of the jobs it lost — meaning all of them and then some. Next is Idaho at 111.7%, then Montana at 87%, then South Dakota at 80.9%, then Arkansas at 77.8%, then Tennessee, Arizona, South Carolina, Mississippi, Indiana, New Hampshire, Texas, and Nebraska.

Notice a pattern here? Each of those states — all 13 of them — has a Republican governor. Not until we get to the purple state of North Carolina, in 14th place, do we find a state with a Democrat governor.

This compelling economic news reinforces a trend that our Nate Jackson reported on earlier this month: a trend of two Americas — one red and economically resilient, one blue and barely bumping along.

No one should be surprised, though, since Democrats seem to think paying people not to work is a sound strategy for getting them back to work. It isn’t, and anyone with even a lukewarm grasp of human nature knows it. As The Wall Street Journal noted this weekend, the states that are shutting off the unemployment spigot are the ones that are seeing their people come off the dole more quickly than those that keep the handouts coming.

“The number of unemployment-benefit recipients is falling at a faster rate in Missouri and 21 other states canceling enhanced and extended payments this month,” the Journal reported, “suggesting that ending the aid could push more people to take jobs.”

At issue is the federal government’s supplemental pandemic aid, which added $300 per week to each person’s existing state unemployment benefit — a sizable giveaway that the feds extended for up to 18 months, nearly three times as long as the typical 26-week state package. The $300 supplemental benefit is set to expire in early September, but some states have been opting out early, and the result has been a win-win:

“Missouri cut off payments as of June 12,” as the Journal continues, “joining three other states as the first to do so. Seven states followed with an end on June 19, and this weekend, benefits are expiring in 10 more states. Four more states will curtail benefits by July 10.”

Here’s another way to look at it, using a U.S. map buried in the back of the latest state unemployment report from the Bureau of Labor Statistics: 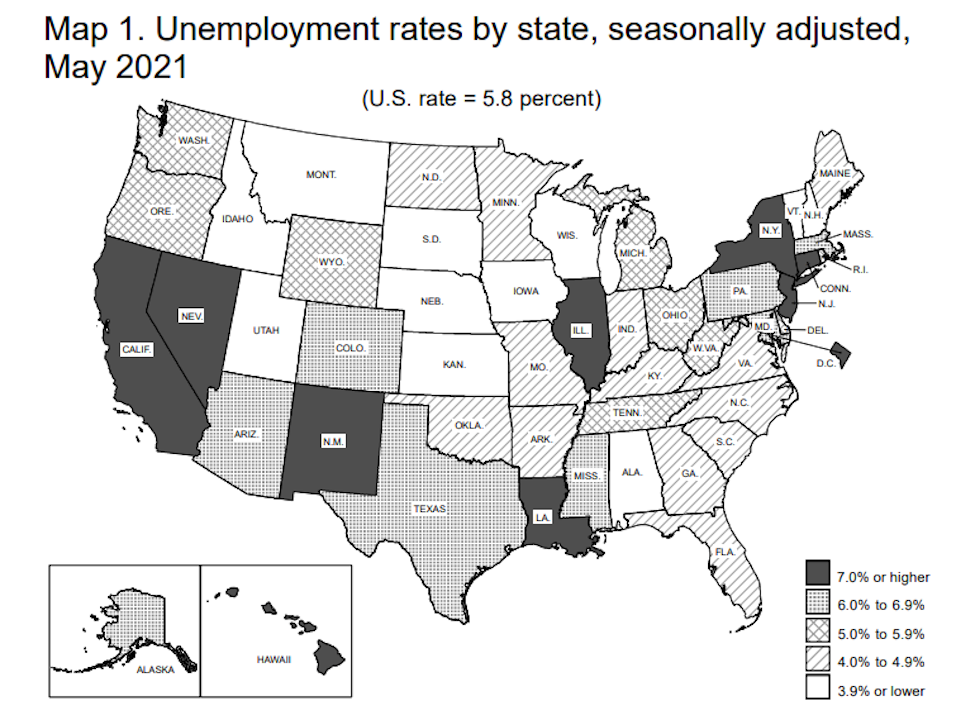 When it comes to economic prosperity, elections clearly have consequences.