The Generation That Hates George Washington

An op-ed in a paper named for the father of our nation calls for renaming the university named for him.

The Washington Post — a paper named for the town named for George Washington, mind you — ran an op-ed from a senior at George Washington University demanding a name change for the school. “Maybe rename the paper before running this?” National Review’s Dan McLaughlin teased. Or maybe if this snowflake student is so triggered, he could simply transfer to one of the hundreds of schools across the nation named for someone or something else.

More on that op-ed in a minute. First, let’s flashback to 2017 when a guy named Donald Trump was widely mocked by the Leftmedia for predicting this very thing:

So this week it’s Robert E. Lee. I noticed that Stonewall Jackson’s coming down. I wonder, is it George Washington next week? And is it Thomas Jefferson the week after? You know, you really do have to ask yourself, where does it stop?

At the time, The Washington Post ran a headline with the lampooning title, “Historians: No, Mr. President, Washington and Jefferson are not the same as Confederate generals.”

Yet Trump was right. “Progressives” never stop. And it didn’t take until a college kid’s op-ed in 2022 for Trump to be proven right. Statues of Washington and Jefferson were coming down or being vandalized two years ago as part of the Black Lives Matter purge of American history.

Which brings us back to this GWU student’s ignorant diatribe.

“Racism has always been a problem at GW,” he asserts, followed by some historical markers and current statistics. The school’s manifold shortcomings, in his view, include the fact that “no African languages are taught at the university.” His thesis is, “These problems are rooted in systemic racism, institutional inequality and white supremacy.”

To accomplish real reform, he insists that Washington must go, as well as buildings named for James Madison and Winston Churchill, and even the school’s Mount Vernon Campus, “named for George Washington’s former slave plantation.” Moreover, the school must enroll more black students and replace its outgoing president with one who’s black.

Well, it’s obvious that he passed his exam in Critical Race Theory 101.

The real story here is that this is a deep, wide, and serious problem. American academia is chock-full of this anti-American garbage, and our nation’s future leaders are being indoctrinated with it. We don’t “Hail Thee George Washington” (the school’s motto) because he owned slaves. We do so because of the truths in our first paragraph. Yet far too few students in any school at any grade level today could say anything historically meaningful about Washington or any of the other Founders, much less express the profundity of their contributions to American and human history.

Virtually no prominent people on the Left — not in politics, the media, or any institution — will stand up and rebuke this racial grievance-mongering, either. Quite the opposite; they teach and foment it.

The supreme irony in all of this is that it was the bold and heroic efforts of Washington and his fellow Founders that secured for us the free country we still (to some degree, anyway) enjoy today, including the freedom of speech and press that allow this drivel to be seen by anyone.

“No country upon earth ever had it more in its power to attain these blessings than United America,” Washington wrote in 1788. “Wondrously strange, then, and much to be regretted indeed would it be, were we to neglect the means and to depart from the road which Providence has pointed us to so plainly; I cannot believe it will ever come to pass.”

It is alarming that if students like the miseducated nincompoop at Washington’s namesake university are any indication, we have already departed “the road which Providence has pointed us to so plainly.” “Much to be regretted,” indeed. And much to be corrected. 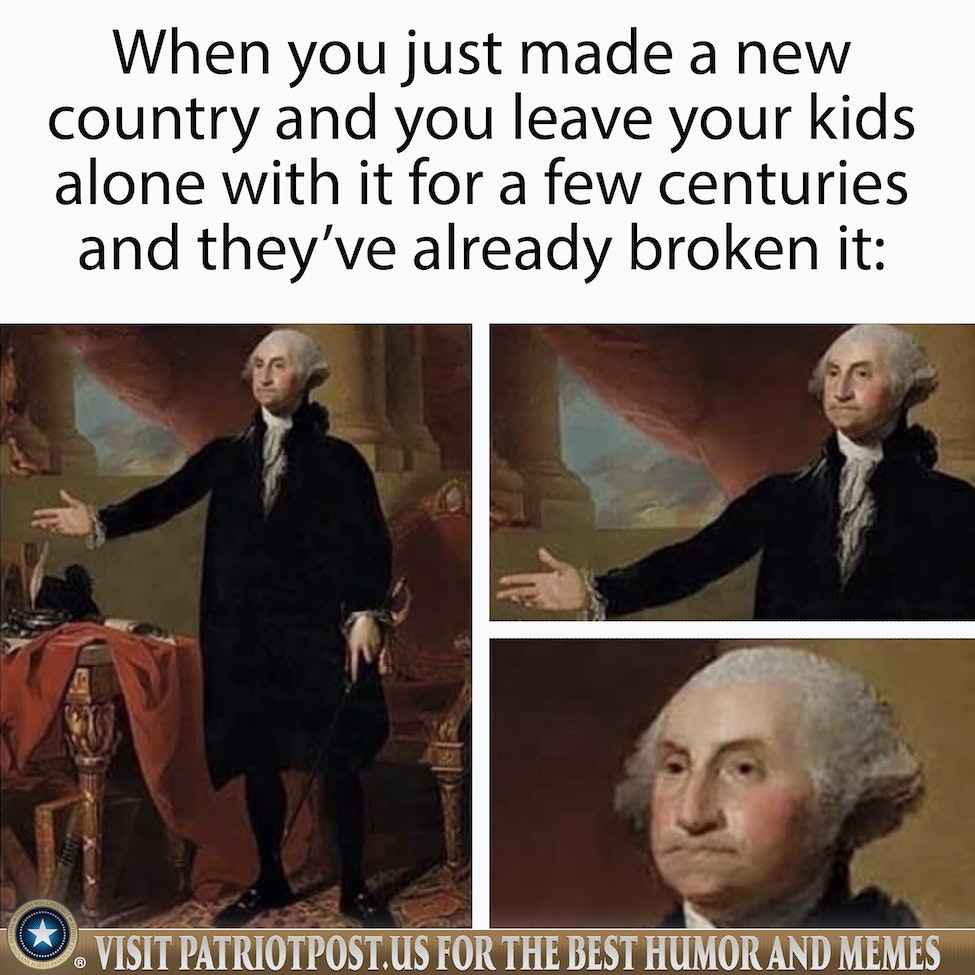 Pelosi Ignores the Discipline of Her Church

On Gas Prices, Biden Says the Quiet Part Out Loud

In Brief: Ethanol and Inflation