Blood and Treasure — The Price of Liberty

“I am well aware of the Toil and Blood and Treasure, that it will cost us to maintain this Declaration, and support and defend these States. Yet through all the gloom I can see the rays of ravishing Light and Glory. I can see that the end is more than worth all the means…” —John Adams (1776) 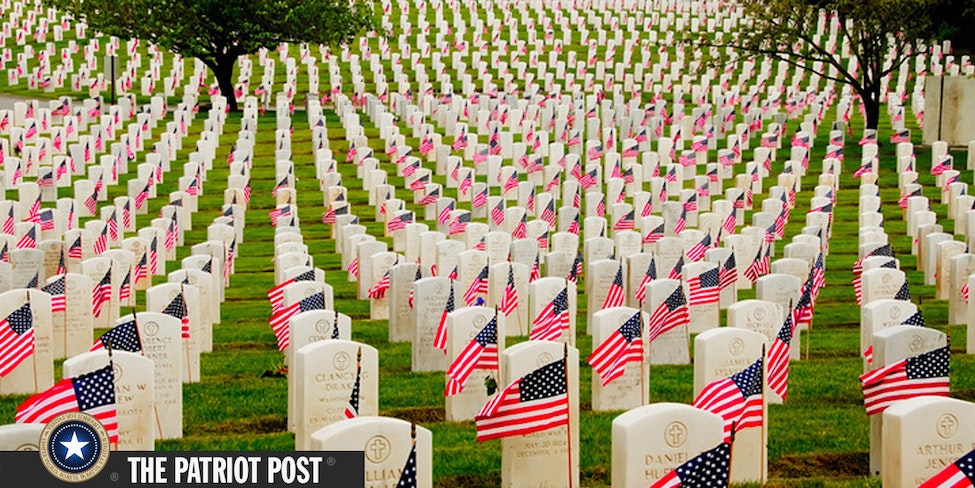 Of course, you already knew that — not only because you’re among millions of American Patriots who honor the memory of their fellow Patriots, but, sadly, because you can’t escape the crass commercialism of the “Memorial Day Sale.”

To suggest I take offense at such commercialization is wholly understated — that anyone would associate the word “memorial” with the word “sale” is profoundly idiotic. However, given the degraded state of our consumerist culture, Memorial Day has been sold out, along with Washington’s Birthday, Independence Day, Veterans Day, Thanksgiving and Christmas.

And it’s no wonder, given that government schools no longer teach civics or any meaningful lessons in history, and left-wing courts have excluded God (officially) from the public square.

However, we know that Memorial Day is not for sale — and we know that more than a million American Patriots have already paid the full price.

In my most recent column for Armed Forces Day, I wrote about the latest examples of the Left’s relentless assault on our uniformed Patriots and the fundamental standards that have sustained American Liberty since our nation’s founding.

Since the opening salvos of the American Revolution, nearly 1.2 million American Patriots have died in defense of Liberty. Additionally, 1.4 million have been wounded in combat, and tens of millions more have served honorably, surviving without physical wounds. These numbers, of course, offer no reckoning of the inestimable value of their service or the sacrifices borne by their families, but we do know that the value of Liberty extended to their posterity — to us — is priceless.

It is for that reason that we set aside the last Monday in May to honor all those fallen Soldiers, Sailors, Airmen, Marines and Coastguardsmen who have refreshed the Tree of Liberty with their blood, indeed with their lives, so that we may live free.

This week, pause with me to ponder the story of just one of the Patriots who have given their lives in defense of their brothers in arms and in fulfillment of their sacred oaths to defend Liberty.

Army Chaplain Emil Kapaun was the son of Czech immigrants who settled in Pilsen, Kansas. Father Kapaun was a Catholic priest who became a military chaplain in 1944. He served on domestic installations and then in Burma in 1945-46.

After returning home, he earned a graduate degree from the Catholic University under the G.I. Bill but returned to active duty in 1948. In 1949, he took his ministry to Japan and a year later, as chaplain to the 8th Cavalry Regiment, 1st Cavalry Division, he departed Tokyo for Korea — after the North invaded the South. The 1st Cavalry made the first amphibious landing of the Korean War. A month later he was assigned to 3rd Battalion, 8th Cavalry Regiment, and headed for the front. 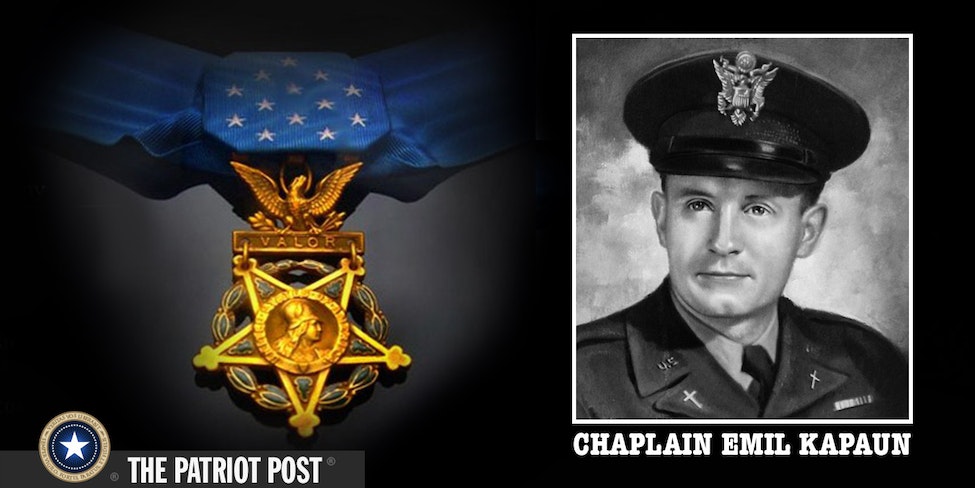 On Nov. 1, 1950, Captain Kapaun and other soldiers with the 8th were overrun and taken prisoner by the Red Chinese. They, and others taken captive, were marched 90 miles to a temporary prison camp at Sombakol and then to a permanent POW camp at Pyoktong, North Korea. It was his fearless actions caring for other soldiers on that march and in the POW camps that would result in Emil Kapaun being awarded the Medal of Honor.

He risked his life every day to serve those around him, as recalled by former POWs held captive with Kapaun.

According to his Army biography, Fr. Kapaun “distinguished himself by extraordinary heroism, patriotism, and selfless service.” I invite you to read his Medal of Honor citation. You can also watch a narrative about his service and sacrifice.

Indeed he did, and he represented the core of what is good and right about American. I encourage you to read his Medal of Honor citation.

In 1962, Gen. Douglas MacArthur addressed the cadets at the U.S. Military Academy, delivering his farewell speech, “Duty, Honor, Country.” He described the legions of uniformed American Patriots as follows: “Their story is known to all of you. It is the story of the American man at arms. My estimate of him was formed on the battlefields many, many years ago and has never changed. I regarded him then, as I regard him now, as one of the world’s noblest figures — not only as one of the finest military characters, but also as one of the most stainless.”

On Memorial Day of 1982, President Ronald Reagan offered these words in honor of Patriots interred at Arlington National Cemetery: “I have no illusions about what little I can add now to the silent testimony of those who gave their lives willingly for their country. Words are even more feeble on this Memorial Day, for the sight before us is that of a strong and good nation that stands in silence and remembers those who were loved and who, in return, loved their countrymen enough to die for them. Yet, we must try to honor them not for their sakes alone, but for our own. And if words cannot repay the debt we owe these men, surely with our actions we must strive to keep faith with them and with the vision that led them to battle and to final sacrifice.” 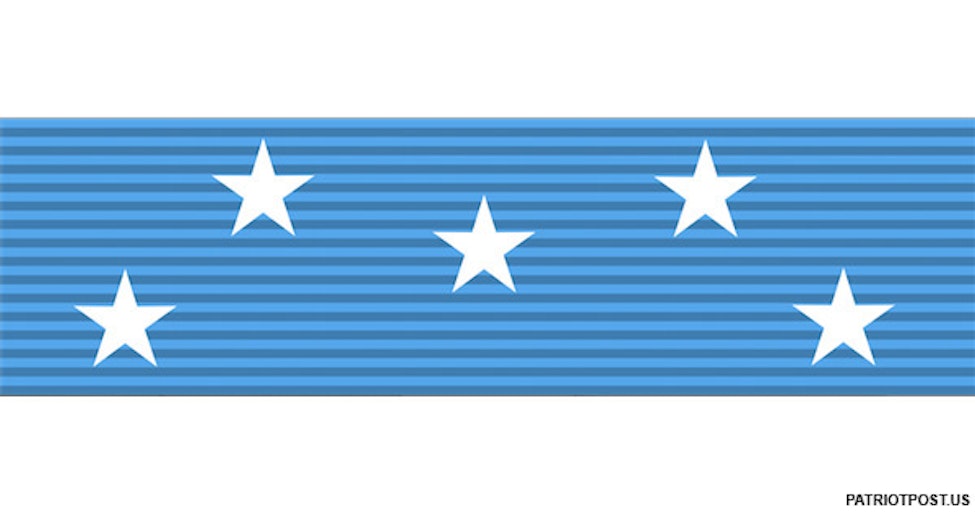 Our first obligation to them and ourselves is plain enough: The United States and the freedom for which it stands, the freedom for which they died, must endure and prosper. Their lives remind us that freedom is not bought cheaply. It has a cost; it imposes a burden. And just as they whom we commemorate were willing to sacrifice, so too must we — in a less final, less heroic way — be willing to give of ourselves.

It is this, beyond the controversy and the congressional debate, beyond the blizzard of budget numbers and the complexity of modern weapons systems, that motivates us in our search for security and peace. … The willingness of some to give their lives so that others might live never fails to evoke in us a sense of wonder and mystery.

One gets that feeling here on this hallowed ground, and I have known that same poignant feeling as I looked out across the rows of white crosses and Stars of David in Europe, in the Philippines, and the military cemeteries here in our own land. Each one marks the resting place of an American hero and, in my lifetime, the heroes of World War I, the Doughboys, the GIs of World War II or Korea or Vietnam. They span several generations of young Americans, all different and yet all alike, like the markers above their resting places, all alike in a truly meaningful way.

As we honor their memory today, let us pledge that their lives, their sacrifices, their valor shall be justified and remembered for as long as God gives life to this nation. … I can’t claim to know the words of all the national anthems in the world, but I don’t know of any other that ends with a question and a challenge as ours does: “O! say does that Star-Spangled Banner yet wave, O'er the land of the free and the home of the brave?” That is what we must all ask.

The greatest American presidents, from George Washington to Ronald Reagan, understand that war is an ugly thing. Though no Patriot wants war, it is a fool who believes that Liberty requires no defense.

In his essay “The Contest In America,” 19th century libertarian philosopher John Stuart Mill wrote, “War is an ugly thing, but not the ugliest of things; the decayed and degraded state of moral and patriotic feeling which thinks nothing worth a war, is worse. A man who has nothing which he cares more about than he does about his personal safety is a miserable creature who has no chance at being free, unless made and kept so by the exertions of better men than himself.”

Millions of our fellow countrymen have distinguished themselves as “better men” in their service to our nation.

In honor of those American Patriots who have died in defense of our great nation, lower your flag to half-staff from sunrise to 1200 on Monday. (Read about proper flag etiquette and protocol.) Join us by observing a time of silence at 1500 (your local time) for remembrance and prayer. Offer a personal word of gratitude and comfort to any surviving family members you know who are grieving for a beloved warrior fallen in battle.

On this and every day, please pray for our Patriot Armed Forces now standing in harm’s way around the world in defense of Liberty, and for the families awaiting their safe return.

(Please consider supporting one tangible part of The Patriot Post’s military mission of service — “Operation Shield of Strength” — by sponsoring shields for military units and their families.)

Good News: Parents Are Dropping Kids Out of Public School

“The foundation of our Empire was not laid in the gloomy age of Ignorance and Superstition, but at an Epocha when the rights of mankind were better understood and more clearly defined, than at any former period.” —George Washington (1783)