Part of our core mission? Exposing the Left's blatant hypocrisy. Help us continue the fight and support the 2022 Independence Day Campaign now.

For the last two months, I was, initially at least, amused by the now-ubiquitous adjectives and nouns invoked to describe a large swath of Americans — the “heroic heroes” across our nation, who are being so-acclaimed because they have some role associated with healthcare or the treatment of those suffering from the ChiCom COVID-19 virus. Who knew we had so many?

My initial amusement, though, has devolved into irritation. Why? Because of the grossly cavalier misapplication of this word by mass-media talkingheads, few of whom have ever witnessed, much less performed, anything truly heroic. Thus, they lack context for and understanding of genuine heroism.

Allow me to offer my own definition of “hero” in the proper context: “An ordinary person faced with extraordinary circumstances, summoning the greatest measure of courage in order to place his or her life at immediate mortal risk to save the life of another.” Thus, “hero” is a word that should be reserved exclusively for that level of service and sacrifice, be it by an average citizen, a first responder, or a Patriot in uniform.

Setting the low bar for exploitation of this revered descriptor, Nancy Pelosi recently announced her bloated $3 trillion “HEROES Act,” the latest entry in the Covid “everyone is a hero” file. I mean, a vote against that leftist tub of lard must be a vote against our nation’s heroes … right?

A quick search of references to “frontline heroes” for the past week returned thousands of national and local media stories related to those helping people in a variety of circumstances. The purpose of most of these stories was a well-meaning tribute, a “thank you” to people doing their jobs under difficult circumstances.

But, again, as much as we appreciate the efforts of our fellow Americans here, doing one’s job under difficult circumstances is not heroism.

President Donald Trump, in his exaggerated New York rhetorical style, has led the lavish use of the hero label, declaring recently: “They’re running into death just like soldiers run into bullets, in a true sense. I see that with the doctors and the nurses and so many of the people that go into those hospitals. It’s incredible to see. It’s a beautiful thing to see. But I really call them ‘warriors.’” He then inappropriately broadened that analogy to include all Americans: “We’re all warriors; everyone in our country is a warrior. We have to be because of what happened. And it should have never happened. It should have been stopped at the source.”

A day later, in an alliterative Rose Garden ceremony for “Hard Work, Heroism, and Hope,” the president said, “I’d like to thank everybody for being here, especially our great, great heroes. Because that’s what you are — heroines and heroes. That’s exactly what you are.”

Actually, in New York City, the epicenter of CV19 disease and death, healthcare workers and police have a lower rate of infection than the city’s population in general.

Unfortunately, in many locations outside of major urban centers, a significant sacrifice that healthcare workers have made has been the loss of their jobs in the name of “flattening the infection curve” — more than 1.4 million of them in April and many more yet to be counted thus far in May. Of course, most of these workers have been temporarily furloughed and will return to work during the restoration of our economy — the Great Reopening — because, as we have noted repeatedly, that restoration will inevitably result in more infections. But that is the consequence and heavy cost of a functioning society and economy.

Beware of the politically polar framework that Democrats and their Leftmedia outlets promote: On the Right is unmitigated reopening and on the Left is total lockdown. But those two polar opposites constitute a false dichotomy, and that phony choice enables those on the Left to claim that every death taking place after a state reopens has unnecessarily placed economic interests above life. This is a convenient and despicable lie, but one that will be repeated frequently until the November elections.

Now, before you first responders and healthcare folks flood my inbox, let me say something that should go without saying: I have great respect for you and what you do. In fact, to better understand my respect for you, let me share a little personal history. In the summer between my freshman and sophomore years of college, when I aspired to a career in law enforcement with the FBI or Secret Service, I graduated from a state police academy and for the next three years wore the law-enforcement uniforms of two states while completing my undergraduate degree. Additionally, I was certified as an EMT and firefighter — so I was a dedicated first responder. And though I found myself in more than a few dangerous situations, I never did anything that would or should be described as “heroic.” And certainly, nobody I worked with ever thought that simply putting on a uniform made them a “hero.” Among my colleagues, that notion was simply absurd.

Fact is, I have never met any first responders or healthcare workers who would ever describe themselves or their service to others as “heroic.” They would reject that label outright.

However, in those early career years and since, I’ve known police officers, firefighters, and EMS personnel who actually did do heroic things, placing their lives in immediate mortal peril to assist a citizen or fellow first responder.

Moreover, in my capacity as a board member of the National Medal of Honor Heritage Center, I’ve been privileged to meet many members of our nation’s most exclusive fraternity — those military personnel whose courage under the most extreme of circumstances has earned them our nation’s highest military award for valor.

Not one of those Medal of Honor recipients would describe their actions as “heroic,” but simply being in a place and time that required something extraordinary of them. To a man, they are then quick to say that most others would have done the same if they’d been in the recipient’s boots.

This week, falling as it does between Armed Forces Day and the upcoming observance of Memorial Day, allow me to express my frame of reference for the meaning of “hero” by telling you about one American.

Last Thursday, I received word from a mutual friend that Staff Sgt. Ronald J. Shurer II had died after a three-year battle with cancer.

In 2008, at the age of 29, Ron was a Senior Medical Sergeant in Special Forces Operational Detachment Alpha 3336, Special Operations Task Force-33, in support of Operation Enduring Freedom during the battle of Shok Valley, Afghanistan. He was an ordinary man who faced extraordinary circumstances and summoned the courage to repeatedly run through enemy fire to provide medical care to his brothers in arms. Despite being wounded himself, he tended to four critically wounded soldiers and 10 injured commandos, then helped evacuate many wounded through fields of fire to waiting medevac helicopters.

In recognition of his actions, Ron Shurer was awarded the Medal of Honor by President Donald Trump on 1 October 2018, having exhibited all the fundamental character traits associated with that singular award: Courage, Commitment, Citizenship, Sacrifice, Integrity, and Patriotism. To read and contemplate his citation is to understand what “hero” really means.

Typical of such warriors was Ron’s comment about receiving the recognition for his service: “This award is not mine. This award wouldn’t exist without the team. If they weren’t doing their job, I wouldn’t have been able to do my job.”

Last month, on 6 April, the 12th anniversary of the battle of Shok Valley, Ron wrote, “When we started working our way up that mountain, we didn’t expect the fight we would face … but neither did they.”

Dillon Behr, one of the men Ron saved that brutal day, wrote: “Without Ron Shurer at my side, I would have died that day. No question. His presence gave me the confidence to know I could make it. There’s a good chance if he would have been critically injured or killed on the battlefield … we all might have died out there.”

Ron left military service in 2009, becoming a Secret Service agent and eventually serving on a team defending the president.

He was the son of career Air Force parents Ronald and Fabiola Shurer, and at the tragically young age of 41 he leaves behind his wife, Miranda, two sons, Tyler and Cameron, and his extended family.

Fellow Medal of Honor recipient Flo Groberg said of Ron: “He was an inspiration to me. He never let cancer take away his smile and his mission to support our community. We all know about his military exploits, but it was the husband, the father, and the friend that made Ron unique. He never showed his pain — only his love and strength. … He was the ultimate friend, and the best teammate that you could ever ask for. … God Speed, my friend.”

In a nation of some 330 million people, after Ron’s departure, only 69 Medal of Honor recipients survive today.

Ron was a genuine hero — one who demonstrated the humility that always attends authentic acts of heroism. He was a man of faith, and he lived these Gospel words: “Greater love has no one than this: to lay down one’s life for one’s friends.” 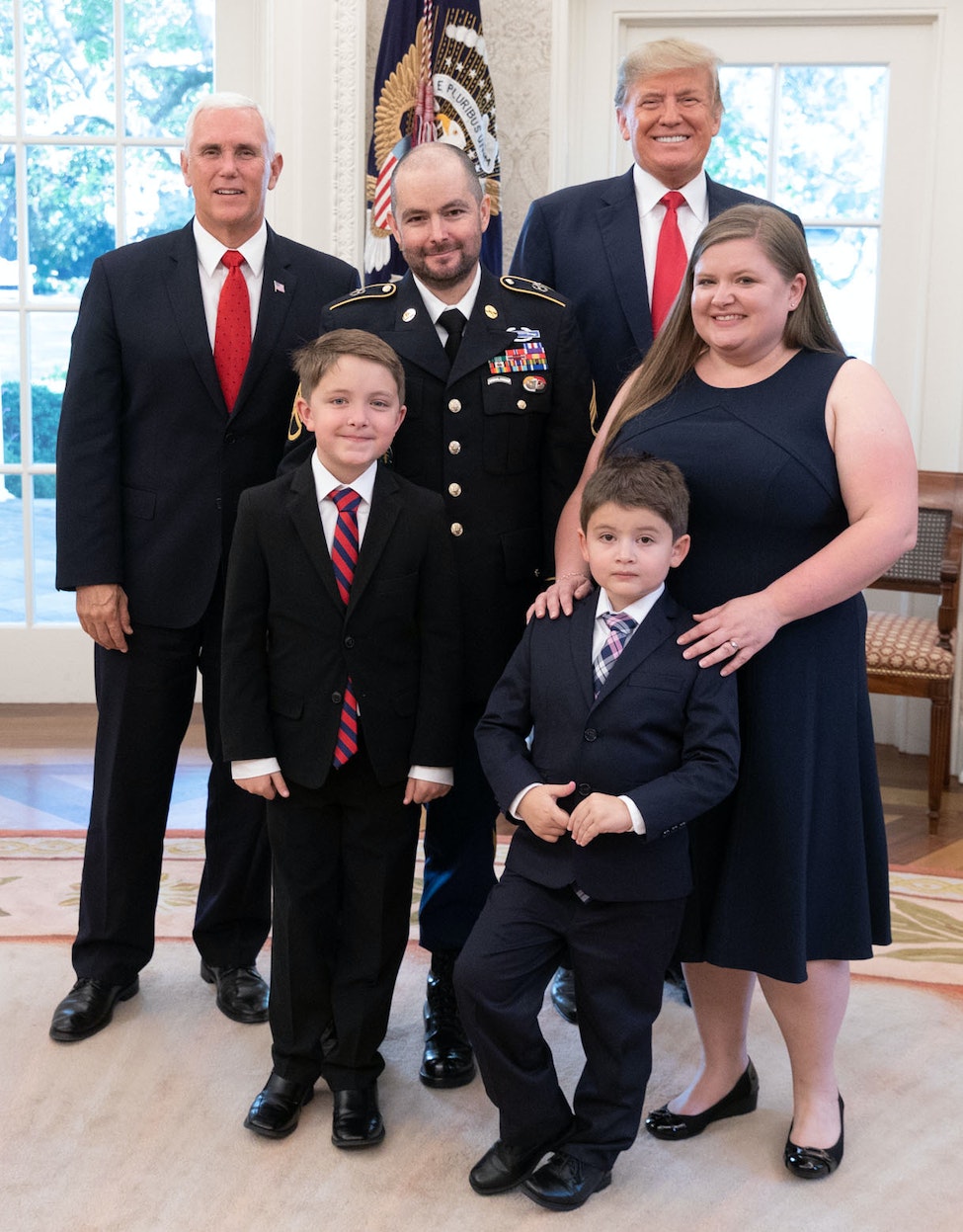 Supreme Court Reins in the Bureaucracy

Pro-Abortion Lies and How to Debunk Them

Pride Month Is Over, but the Rainbow Mafia Is Never Done

“There are more instances of the abridgment of the freedom of the people by gradual and silent encroachments of those in power than by violent and sudden usurpations.” —James Madison (1788)