Year in Review: Before the Biden/Harris ‘Victory’

The future of Liberty rests with tens of millions of grassroots American Patriots ready to defend it.

“We should never despair… If new difficulties arise, we must only put forth new exertions and proportion our efforts to the exigency of the times.” —George Washington (1777)

Fellow Patriots, having spent a considerable number of my 65 years analyzing national security, never in those years have I witnessed greater combined domestic and foreign threats to American Liberty from enemies. Those words are not hyperbole — nor should they be discouraging. I write them in the spirit of enlisting engagement, and I hope you read them as such.

You are among a very large and influential body of Americans who rise to the exigencies of the times, who stand fast and firm in the face of adversity.

In all your Patriot Post team’s 25 years of defending Liberty, there has been no time that compares with today. But as the “old man” on this crew, I understand more viscerally the difficulties our great nation has endured in other eras — the World Wars and economic calamities faced by my father’s Greatest Generation, and in my memory, the USSR/Cuban Missile threat and the cultural rot of the 1960s.

Know that Liberty is eternal, not temporal, and our nation will endure.

But the current domestic threat to Liberty is as difficult as any since President Ronald Reagan confronted the leftist enemies of our Republic, the most notable of whom were Beltway swamp rats when he was president. That would include Joe Biden, Chuck Schumer, and Nancy Pelosi, who arrived in DC in 1973, 1981, and 1987, respectively.

It was a year ago in November that Joe Biden and Kamala Harris declared victory over Donald Trump in the 2020 presidential election.

But the fix was in before Election Day.

The Democrats had not been able to take down Trump in their first two attempted deep-state coup d'états — the “Russia collusion” delusion scripted by Hillary Clinton and Barack Obama, and the Pelosi/Schiff impeachment charade to convict Trump for what Biden actually did in Ukraine.

But the Demos’ bulk-mail ballot fraud finally accomplished what their deep-state conspirators could not. Millions of unauthenticated ballots were already in the hopper before Election Day 2020.

Looking back over the last year, it is astounding to consider all the forces aligned against Donald Trump and his fellow Republicans, despite the Trump administration’s considerable and, in fact, historic achievements. Throughout his tenure, President Trump focused on keeping his promises to the American people.

He advanced conservative nominees to the Supreme Court. He cut taxes and regulations in order to unleash historic economic growth, providing the lowest unemployment for Black and Hispanic Americans in decades. Inflation and interest rates were low while GDP growth was surging. He rebuilt our military. Russia, Iran, China, and North Korea understood that Trump meant what he said, and they conducted themselves accordingly. Trump wiped out ISIS, and Afghanistan was on its way to sustainable albeit tenuous stability, the Taliban understanding full well that Trump would squash them like roaches if they stepped out of line. He took enormous steps to void unfair trade practices, particularly with China. After years of southern border security lip service from previous presidents, Trump took the most dramatic measures to curb illegal immigration of any president in recent history, including moving forward on border walls and other security measures. He moved the nation toward energy independence, lowering energy costs for all Americans. He supported law and order, which accounted for the almost universal support he received from law enforcement rank and file nationwide.

All that notwithstanding, predictably, in the six months ahead of the election, Democrats effectively politicized the devastating ChiCom virus pandemic.

On top of that, the racist Demo Party principals, who endlessly foment division and hatred, used the canard of “systemic racism” as political fodder to incite their Marxist Black Lives Matter radicals and their cadres of anarchist agitators into riotous burn, loot and murder rages across the nation. Likewise, they led the charge to both blame and defund police.

Those gale-force headwinds combined with the perennial challenges posed by the Leftmedia and Big Tech collusion with the Democrat Party. The dollar value of that collusion is incalculable. Just consider the mass media blockbuster blackout of Biden’s corrupt ChiCom connection just before the election.

As I’ve noted before, imagine what the American political landscape would look like if the mainstream and social media platforms were actually politically neutral — as they should be. That landscape would shift seismically to the right.

Of course, there were hundreds of millions of dollars in “soft money” graft from socialist billionaires, including George Soros and Michael Bloomberg, and their fellow socialists, Jeff Bezos and Tom Steyer.

Enter the Biden/Harris regime and its collaborators, Schumer and Pelosi.

In just nine months, they have managed to wreck almost all the good accomplished by the Trump administration. Domestically, Biden’s open-border policy is responsible for the historic flood of illegal immigrants into our nation, more than two million and counting, competing for American jobs Biden promised to protect. But the potential to add Hispanic voters to Demo rolls is more important than American jobs. More Americans have died from (or with) COVID on Biden’s watch than under Trump, which Biden uses as fodder for his reckless vaxxing mandates and vax passport requirements. The economy is stagnant as inflation is roaring back — shades of Jimmy Carter’s “stagflation.” And our nation went from a position of great world strength to one of weakness and appeasement.

Biden’s surrender and retreat from Afghanistan has emboldened far more powerful tyrants, notably our near-peer adversaries China and Russia, and of course Iran and North Korea are on the move.

The greatest of our enemies is Red China and its quest for global domination. Biden is enabling that march.

Biden is a narcissistic non compos mentis jackass, a swamp-dwelling droid for the last 50 years, a political dead man walking long past his cognitive expiration date who is so sequestered in his Beltway bubble that he doesn’t give a damn about We, the People, he pretends to represent.

Now, the Biden/Harris regime would like to shutter our nation in the darkness of socialist oppression under their limitless statist power. They will not succeed.

They think they are bullet proof. They are not.

Fact is, the vast majority of Americans are good and decent people — however disoriented some on the Left may be. Most Americans simply want the opportunity to prosper, to be secure in their persons and property, to support their family, to care for others, and to live in peace.

Their dissatisfaction with the rapid decline of our nation under the Democrats is loudly trumpeted in Biden’s abysmal approval ratings. Notably, Biden’s disastrous polling is not just an assessment of his performance, but the failure of his entire regime. 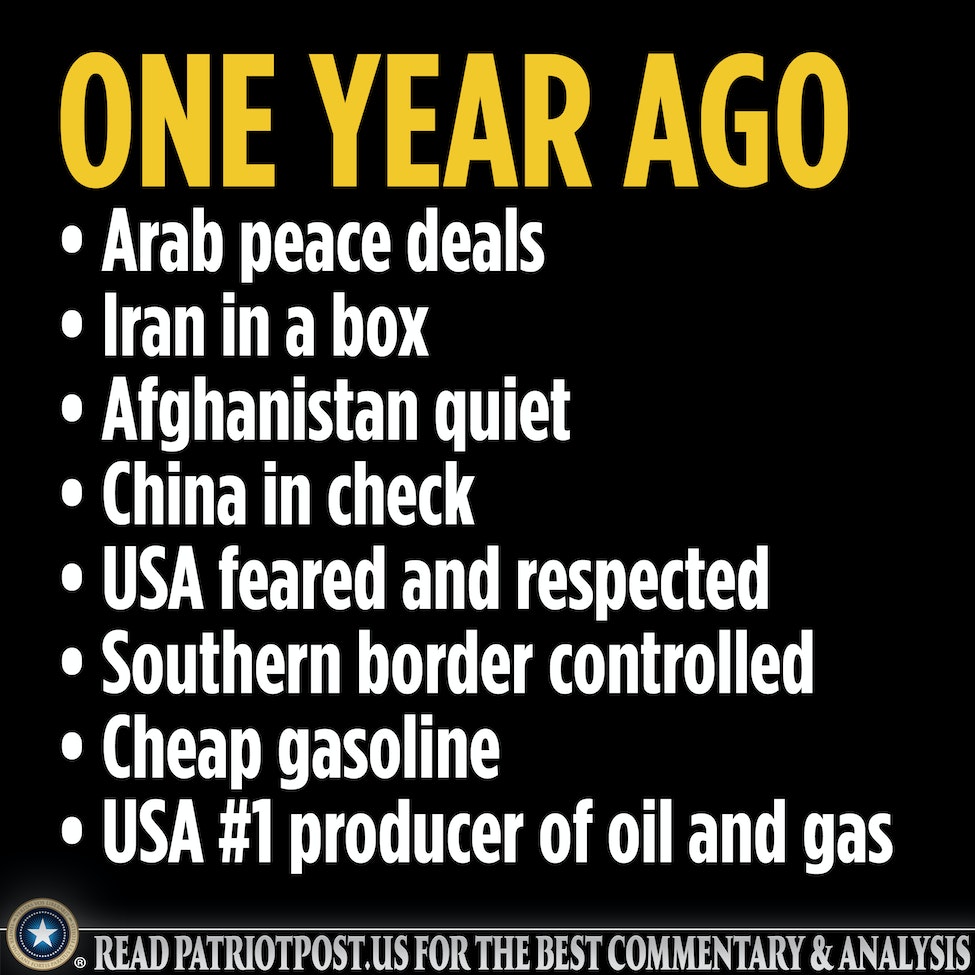 The future of Liberty rests with more than 100 million grassroots American Patriots ready to defend it.

Over the last 25 years, we have provided analysis from the frontlines of five presidencies. Until Biden, those years were evenly split, 12 Republican and 12 Democrat. Now we find ourselves in the first year of the most inept administration in jackass party history.

Since our inception, your Patriot Post team’s first objective has been to provide the ammo and tactical assistance needed by “grasstop” leaders across our nation. Now, as a primary touchstone of Liberty for tens of thousands of local grassroots influencers, we’re providing the most accurate and on-target advocacy on the Web.

Some of you have been with us since the beginning. Some have supported us for many years. Many have recently joined our ranks — which are now growing faster than ever.

Grassroots conservatives have always done the heavy lifting for Liberty in our communities and states, and supporting the Patriot Fund year-end campaign is the most cost-effective way to ensure Liberty prevails.

As you know, we don’t publish from inside the Beltway, nor are we sustained by any political, special interest, or parent organization. Moreover, we accept NO advertising — which keeps our pages and publications clutter-free. More important, it helps us avoid the invisible editorial influence of advertising revenue.

Our mission and operations budgets are funded solely by the generosity of American Patriots like you.

For this reason, I humbly ask that you please support The Patriot Fund’s 2021 Year-End Campaign today.

Be heartened by the awesome power that has emboldened Patriots from the dawn of our nation, generations of Patriots who have understood, as George Washington declared, “Our cause is noble; it is the cause of all mankind.”

On behalf of your Patriot Post team, please support our mission to extend Liberty to the next generation.

Thank you for supporting our nation’s premier online journal of American Liberty. Join us in prayer for our nation’s Military Patriots standing in harm’s way in defense of Liberty, our First Responders, and for their families. Please also pray for your Patriot team and our mission to, first and foremost, support and defend our Republic’s Founding Principle of Liberty, and to ignite fires of freedom in the hearts and minds of our countrymen.