Memo to Obama: This is not a “gun problem.” 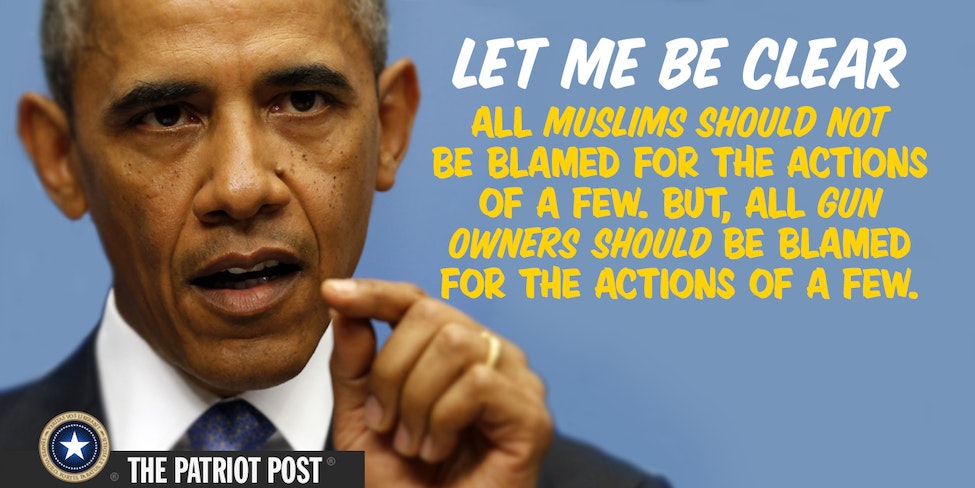 Islamic cultures worldwide are as “tolerant” of homosexuals as they are of women, so it was no surprise to learn that the murder of 49 people and wounding of more than 50 others in a homosexual bar in Orlando Sunday was committed by a radical Islamist.

Omar Saddiqui Mateen was the son of Afghan immigrants. Born in New York, he was a divorced security guard prior to the assault. After the attack, his father posted a video message noting that his son should have refrained because “God himself will punish those involved in homosexuality.”

The FBI agent in charge, Ron Hopper, said the assailant bragged about “having ties to terrorist organizations.” He added in the most politically correct phrasing, “We do have suggestions that that individual may have leanings toward that particular ideology.” Now, what “particular ideology” might that be? Mateen was interviewed three times during two FBI investigations in 2013 and 2014. The assailant called 911 and swore allegiance to the leader of the Islamic State shortly after his initial assault. Peter King (R-NY) of the House Homeland Security Committee, confirmed the connections between Mateen and ISIL, and the Islamic State claimed credit for inspiring the attack.

I have spent a few years consulting with counterterrorism analytical groups over the course of the last five presidential administrations. While the focus of those groups has always been the prevention of WMD attacks — and Obama’s Iran deal certainly ratchets up the potential of that threat vector — the most likely terrorist threats have always been low-tech.

As I wrote in “Islamic Jihad — Target USA,” “The most likely near-term form of attack against civilians on our turf will be modeled after the conventional Islamist assaults in the Middle East — bombings and shootings, as we have now seen in Paris, London, Berlin, Brussels, Sydney, Toronto, Boston, New York and Washington. These attacks were low tech but effective in terms of instilling public fear.” Indeed, the 9/11 attacks started with box cutters, and subsequent attacks at Fort Hood, Boston, Chattanooga, San Bernardino and now, Orlando have all been low-tech.

Predictably, Barack Obama used the tragedy to pander and promote his “gun control” agenda. “[W]e know enough to say that this was an act of terror and an act of hate,” declared Obama. But, he added, “We’ve reached no definitive judgment on the precise motivations of the killer.” Yet he certainly had reached a definitive judgment on the course of action: “The shooter was apparently armed with a handgun and a powerful assault rifle. This massacre is therefore a further reminder of how easy it is for someone to get their hands on a weapon that lets them shoot people in a school, or in a house of worship, or a movie theater, or in a nightclub. And we have to decide if that’s the kind of country we want to be. And to actively do nothing is a decision as well.”

The words “Muslim” and “Islam” never crossed his lips. Fact is, Obama is the one “actively doing nothing” — about radical Islamic terror.

Hillary Clinton joined in, saying, “This was … an act of hate. The gunman attacked an LGBT nightclub during Pride Month. To the LGBT community: Please know that you have millions of allies across our country. I am one of them. … [W]e need to keep guns like the ones used [in Orlando] out of the hands of terrorists or other violent criminals. This is the deadliest mass shooting in the history of the United States and it reminds us once more that weapons of war have no place on our streets.”

The Leftmedia was no different. MSNBC’s Joy Reid declared, “Whether it’s a hate crime or whether it’s related to something related to international terrorism, we’re not getting to the core issue, which is how easy it is to get a gun.”

Memo to the Demo-gogues and MSM pundits: The assailant is a “murderer,” not a “gunman.” The attack occurred in a “gun free” zone. And if Obama could wave his executive “magic wand” and remove all firearms from the United States, may I remind you that Islamists worldwide have murdered far more civilians with simple bomb components. Recall that there were more than three times the number of casualties in the 1995 Oklahoma City bombing by a couple of deranged psychopaths, than in Orlando. That bomb was composed of readily available fertilizer and diesel fuel.

Again, this is not a “gun problem,” and for the record, tens of millions of innocent men women and children have been slaughtered once their means of self-defense was confiscated. See Stalin, Hitler, Mao, et al.

Oh, and if not blaming guns, leftists were also blaming Christians. ACLU staff attorney Chase Strangio (aptly named), declared, “The Chrisitan [sic] Right has introduced 200 anti-LGBT bills in the last six months and people [are] blaming Islam for this. No.”

And a couple of footnotes: First, describing Islamist assailants as so-called “lone wolf” actors or “radicalized,” constitutes a lethal misunderstanding of the Jihadi threat. Describing their attacks as “criminal activity” or “workplace violence,” is asinine. The attacks are, undisputedly, all connected by the fabric of Islamic Jihad. Second, it is worth noting that an Islamist imam, who preached that it was merciful to murder homosexuals, came to Orlando in April of this year. And a final note on Obama’s constituents — Mateen was a registered Democrat voter.

Our prayers are with the families of the dead and wounded.