Iran Nuke Deal — The Sum of All Lies

Obama, Clinton and Kerry Pave the Path for the Detonation of the Islamic Bomb in the U.S.

“There is a rank due to the United States, among nations, which will be withheld, if not absolutely lost, by the reputation of weakness. If we desire to avoid insult, we must be able to repel it; if we desire to secure peace, one of the most powerful instruments of our rising prosperity, it must be known that we are at all times ready for war.” –George Washington (1793) 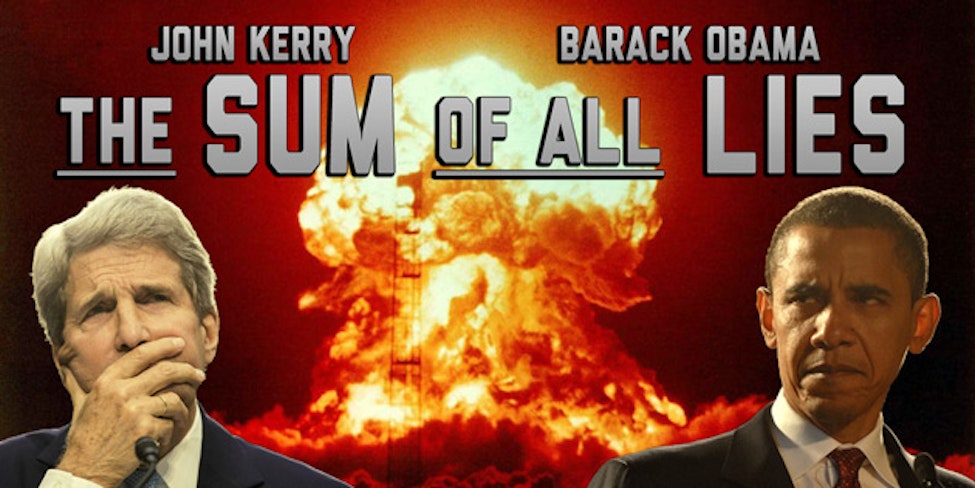 Update: In 2018, Donald Trump wisely unwound Obama’s so-called “Iran deal,” and there were subsequent revelations that Iran’s deceptions were much more dangerous than estimated. Additionally, it has now been confirmed that European negotiators were bribed to signed on, and worse, Obama’s unmitigated lies to secure his faux foreign policy legacy, were much more egregious than estimated.

The “Sum of All Fears” was one of many well-written novels by the late Tom Clancy, whose fictional military, intelligence and terrorism plots were woven with fact-based tradecraft.

The title was inspired by a quote from Winston Churchill: “You may take the most gallant sailor, the most intrepid airman or the most audacious soldier, put them at a table together – what do you get? The sum of their fears.”

Clancy’s plot focused on an Islamist terror group’s endeavor to detonate a nuclear weapon in the U.S. A Syrian cell with the Popular Front for the Liberation of Palestine reconstituted the nuke after discovering the necessary fissile material at an Israeli aircraft crash site.

True to Hollywood form, however, filmmakers grossly altered Clancy’s original plot, resulting in a much less plausible but more politically correct version. In the movie, the terrorists are not Islamists, but “right-wing” neo-Nazis conspiring to detonate a nuclear bomb in Baltimore harbor – and to start a war between the U.S. and Russia as a catalyst for cementing fascist alliances in the rest of Europe. Leave it to Tinseltown’s Left-coast libs to cast these murderous villains as right-wing white supremacists rather than expose the real Islam!

Despite Hollywood’s revisionism, Clancy’s original plot was close to reality back in 1992, and it’s much closer to the stark reality of today, given that Islamists may soon have fissile material from Iran to wage surrogate Jihad against the U.S.

The probability of al-Qa'ida and/or Islamic State actors gaining access to a nuclear weapon and then detonating it in the U.S. (most likely in an East Coast urban center) is increasing by the day.

That escalating threat is due solely to the “sum of all lies” being propagated by Barack Obama and his inept Secretary of State John Kerry, whose record of treasonous treachery dates back to his collaboration with our enemy during the Vietnam War.

There is another “Iran Hostage Crisis” unfolding here, but, unlike the one resolved minutes after Ronald Reagan took office in 1981, this time all Americans are being held hostage, and the current president and his Democrat Party leaders are collaborators.

The Middle East is devolving into an expanding theater of warfare between Iranian Shiites and Arab Sunnis, who could very well combine forces against Israel. Obama, with the help of Kerry and his predecessor, Hillary Clinton, have presided over the political disintegration of North Africa and the Middle East – that dissolution being the direct result of a series of deceptions promulgated to suit Obama’s domestic political agenda.

The first and foremost of those deceptions was rooted in Obama’s 2012 bid for re-election. Amid the cascading failure of his domestic economic and social policies, BO centered his campaign upon faux foreign policy “successes” built around two fraudulent pretexts. First: “Four years ago, I promised to end the war in Iraq. I did.” Second: “Al-Qa'ida is on the run.”

In fact, Obama’s calamitous retreat from Iraq in order to create a campaign slogan bumper sticker left a regional vacuum for the resurgence of a far more dangerous manifestation of Islamic terrorism under the ISIL label, which, in conjunction with a thriving al-Qa'ida terrorist network, poses a dire asymmetric terrorist threat to the West.

In a strategic region where former President George W. Bush’s doctrine of preemption resulted in costly but significant strides toward regional stability and the protection of our critical national interests, Obama has managed to undo the hard-won success of Operation Iraqi Freedom and is doing his best to undermine Operation Enduring Freedom in Afghanistan.

And just six months ago, Obama declared that his counterterrorism policies “have [been] successfully pursued in Yemen and Somalia for years.”

Well, take a gander at the state of Obama’s poster-nations today.

How bad has it become?

Stop for a moment and ponder that assessment fully. 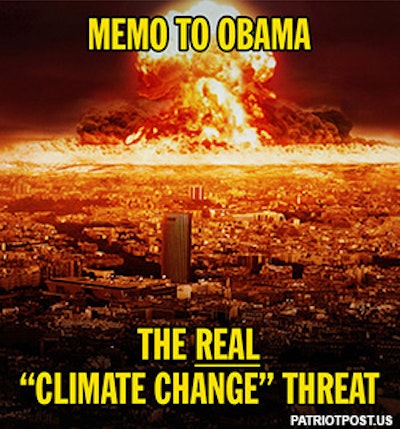 Recall in his Senate testimony, Clapper stated that the direct links between ISIL and domestic terror networks have created “the most diverse array of threats and challenges I’ve seen in my 50-plus years in the [intelligence] business.” He added, “When the final accounting is done, 2014 will have been the most lethal year for global terrorism in the 45 years such data has been compiled. … I don’t know of a time that has been more beset by challenges and crises around the world. I worry a lot about the safety and security of this country. … The homegrown violent extremists continue to pose the most likely threat to our homeland.”

And Flynn is firmly on record regarding Obama’s failure to confront the Islamic threat: “You cannot defeat an enemy you do not admit exists. … I think there is confusion about what it is that we are facing. It’s not just what has been defined as 40,000 fighters in the Islamic State in Iraq and Syria, it’s also a large [radicalized segment of Muslims] who are threatening our very way of life.”

As for the Obama/Kerry negotiations with Iran, Flynn notes, “Iran is [not only] a state sponsor of terrorism. Iran has killed more Americans than al-Qa'ida has through state sponsors, through their terrorist network Hezbollah. … My sense of where the policy is – it’s almost a policy of willful ignorance. … Here we are talking to Iran about a nuclear deal with this almost complete breakdown of order in the Middle East.”

What constitutes “willful ignorance”? Since Obama’s first overtures of appeasement with Iran, it has repeatedly demonstrated it will not comply with any arms or nuclear agreements, sent massive stores of arms to Hamas, supported Assad in Syria, partially occupied Iraq, planned to assassinate the Saudi ambassador to the U.S. and has overthrown the government of Yemen by proxy. And Obama’s response – ZZZZZZZZZ.

Who’s in charge of this debacle?

As Israeli Prime Minister Benjamin Netanyahu noted during his recent address to Congress, Obama’s nuclear negotiations have “two major concessions: one, leaving Iran with a vast nuclear program and, two, lifting the restrictions on that program in about a decade. That’s why this deal is so bad. It doesn’t block Iran’s path to the bomb; it paves Iran’s path to the bomb.” Netanyahu further warned, “Iran’s neighbors know that Iran will become even more aggressive and sponsor even more terrorism when its economy is unshackled and it’s been given a clear path to the bomb.”

“Free fall.” “The most diverse array of threats.” “Willful ignorance.” “The number you need for a weapon.” “[The deal] paves Iran’s path to the bomb.”

And now, after claiming al-Qa'ida’s demise, victory in Iraq and success in Somalia and Yemen, Obama and Kerry are trying to sell us on their nuclear weapons “deal” with Iran under the pretense that it will render the Middle East and our homeland safe from nuclear terrorism?

According to Obama, “There are still details to be worked out, but I think that the basic framework calls for Iran to take the steps that it needs to around Fordo [the underground nuclear development site], the centrifuges and so forth. At that point, then the U.N. sanctions are suspended.”

As the AP characterized it: “Western officials say that Iran and the United States have agreed on the outlines of an understanding that would open the path to a final phase of nuclear negotiations.” And accordingly, Obama pronounced a great victory in achieving “outlines” of an “understanding” to a “path” that leads to a “phase,” another “peace in our time” proclamation.

Once this elusive “deal” is actually signed, Obama insists the U.S. would “preserve the ability to snap back those sanctions if there is a violation.” For the record, there is NO chance that Iran will honor the terms of this agreement. And, there will be NO chance of any “snap back” if Iran violates the agreement because there is NO chance China and Russia will sign back on to sanctions.

Make no mistake, this “deal” is not designed to prevent nuclear terrorism, and at best may just delay it. Of course, no deal is better than a bad deal.

Thomas Sowell notes that Obama’s motivation for this charade with Iran, despite robust objections from Senate and now 367 House Republicans and Democrats, is that “such an agreement will serve as a fig leaf to cover his failure to do anything that has any serious chance of stopping Iran from going nuclear. Such an agreement will protect Obama politically, despite however much it exposes the American people to unprecedented dangers.”

In the end, the central issue is not whether Iran can be trusted, but that Obama can’t be trusted. Clearly, Obama’s foreign policy malfeasance and his blinding Islamophilia pose the greatest threat to U.S. national and homeland security.