If you’re a Democrat, you’re a lot more likely than Republicans to be afraid of the coronavirus.

Power Line’s John Hinderaker made an observation recently that perhaps you’ve also made: Because of the jobs they tend to hold, Democrats have had it much easier during the COVID pandemic than Republicans.

“Democrats,” he wrote, “tend to be clustered in institutions and occupations that have been relatively lightly impacted by the coronavirus shutdowns, while Republicans predominate in the areas (e.g., small business) that the shutdowns have hit the hardest.”

Think about it: Your left-leaning friends are teachers, counselors, school administrators, researchers, lawyers, civil servants, government employees, social workers, media professionals, and environmental workers. They’re less involved in sales, retail, small business, real estate, banking, financial services, or construction. And given the relative job security of their occupations, you’d think Democrats would have far less to fear from the pandemic than Republicans. After all, their livelihoods are less likely to be at stake. Bring on the lockdowns, they can confidently say, while they kick back at home and draw a steady paycheck and pad their retirement plan.

But you’d be wrong, and resoundingly so.

A Gallup study from earlier this month — a study titled “The Covid-19 Responses of Men vs. Women” — explored the American people’s concerns about catching the virus, wearing a mask, and adhering to social distancing. But buried near the end was a fascinating graphic about how we view the coronavirus differently according to both gender and partisan affiliation — especially partisan affiliation.

“Partisan differences,” say the study’s authors, “have been paramount in U.S. adults’ attitudes and behaviors related to COVID-19; however, the observed gender differences are greater than what we might expect on the basis of partisanship alone.”

As the authors continue: “With a persistent partisan gender gap in American politics, such that men are more likely than women to identify as Republicans, it is important to isolate whether gender differences pertaining to COVID-19 merely reflect differences in partisan preferences or whether there is a more fundamental difference between men and women on this measure. … It is also the case that the average Democratic man is more cautious with respect to COVID-19 than the average Republican woman.”

Talk about burying the lede. As you can see from the chart below, “more cautious” doesn’t begin to describe the gap between how Democrats and Republicans view the virus: 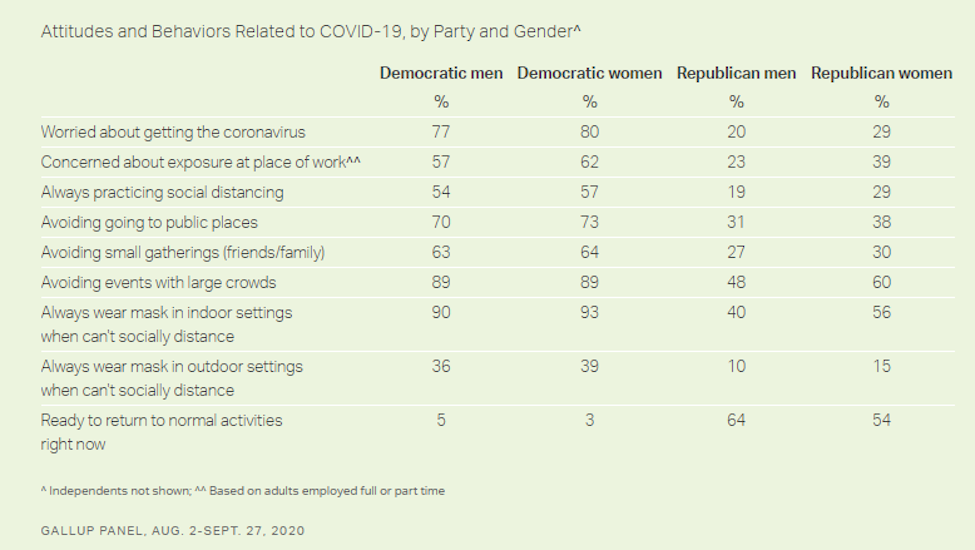 Why this colossal difference? Gallup doesn’t say. But it might have something to do with where we’re getting our information.

If, for example, we’re getting our COVID updates from a news network whose anchors shriek every time they see President Donald Trump in public without a mask, a network whose every other utterance is about “superspreaders,” a network whose leadership refuses to air stories about learning to live with the coronavirus rather than running and hiding from it — well, these things might help explain why those on the Left are so freaked out about a virus whose survivability rate for those under 50 is, according to the CDC, around 99.99%.

Incidentally, a CDC report released in September also reveals that masks and face coverings aren’t effective in preventing the spread of coronavirus, regardless of one’s propensity for masking up. But Joe “Follow the Science” Biden is advocating nationwide mask mandates. Just sayin’.