It’s clear that if given the power, AOC and her ilk would punish and destroy political opponents.

Will the real fascists please stand up? Prior to any mainstream media outlets calling the presidential election for Joe Biden, extreme leftist “Squad” member Alexandria Ocasio-Cortez (D-NY) posted the following statement on social media: “Is anyone archiving these Trump sycophants for when they try to downplay or deny their complicity in the future? I foresee decent probability of many deleted Tweets, writings, photos in the future.”

Several people responded to AOC’s speech-chilling statement by pointing out its obvious allusions to some of history’s most brutal dictators. One commenter wrote, “Joseph [Stalin] is proud of you!” Another posted an image of Mao Zedong captioned, “Big shoes to fill but you’ll get there.” Still another simply stated, “Archive this: You are insane.”

Maybe the best rebuke came from liberal academic Bret Weinstein, a staunch free speech advocate. “You are an elected representative in a democratic republic and you are setting the stage for retribution against fellow citizens for the crime of holding a different opinion,” he warned. “It’s un-American, you should stop it and council others to do the same.”

Even Whoopi Goldberg of “The View” responded, “We don’t go after people because of who they vote for. … We don’t print out lists. … The last time people did this, people ended up killing themselves. Do not encourage people to print out lists because the next list that comes out, your name will be on, and then people will be coming after you.”

In fact, AOC had also linked to a website run by leftist anti-Trumpers called The Trump Accountability Project. The site advocates collecting the names of anyone who directly worked to support Trump’s presidency so as to target them for harassment. The site states, “The world should never forget those who, when faced with a decision, chose to put their money, their time, and their reputations behind separating children from their families, encouraging racism and anti-Semitism, and negligently causing the unnecessary loss of life and economic devastation from our country’s failed response to the COVID-19 pandemic.” She later deleted the posting, but it’s patently clear that if given the power, AOC would use that power to destroy those with whom she disagrees.

For AOC, like all totalitarians, anyone who fundamentally disagrees with her views on government and “justice” are not merely political opponents. They are evil enemies that need to be attacked and eradicated. As Weinstein noted, this is un-American. And the great irony is that while AOC claims to be fighting for greater democracy and against racism and bigotry, she is actually engaged in doing the exact opposite. What is truly amazing is how apparently blind she is to it. 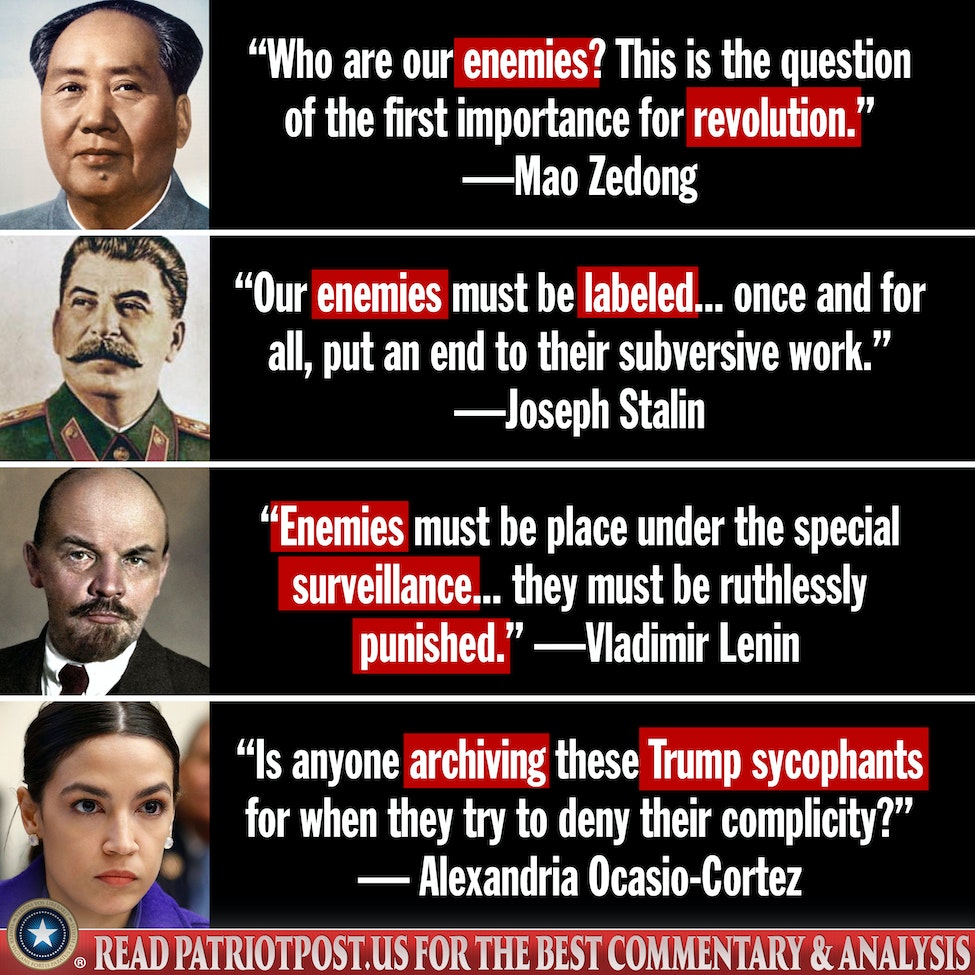 NY Times Is the Literal Propaganda Arm of the Democrats

“To take from one, because it is thought his own industry and that of his fathers has acquired too much, in order to spare to others, who, or whose fathers, have not exercised equal industry and skill, is to violate arbitrarily the first principle of association, the guarantee to everyone the free exercise of his industry and the fruits acquired by it.” —Thomas Jefferson (1816)