A Year’s Worth of Media Malfeasance

It was a dirty job, but someone had to sort through the year’s worst examples of media bias.

Putting one’s finger on the five biggest media failures in any one year is a daunting task. It’s like trying to list the five worst plays during a Detroit Lions football season or Hollywood’s five worst movies of the year — there’s just too much terrible material to sift through.

The Daily Wire’s Hank Berrien, though, has given it a thoughtful effort, while The Federalist’s Tristan Justice took the “easy” way out and built a list of 20 journalistic failures.

As an aside, if there’s a first prize for Photojournalistic Failure of the Year, it has to go to CNN, whose “mostly peaceful” footage of the Kenosha riots was mostly accurate in the same way that Baghdad Bob was mostly credible: 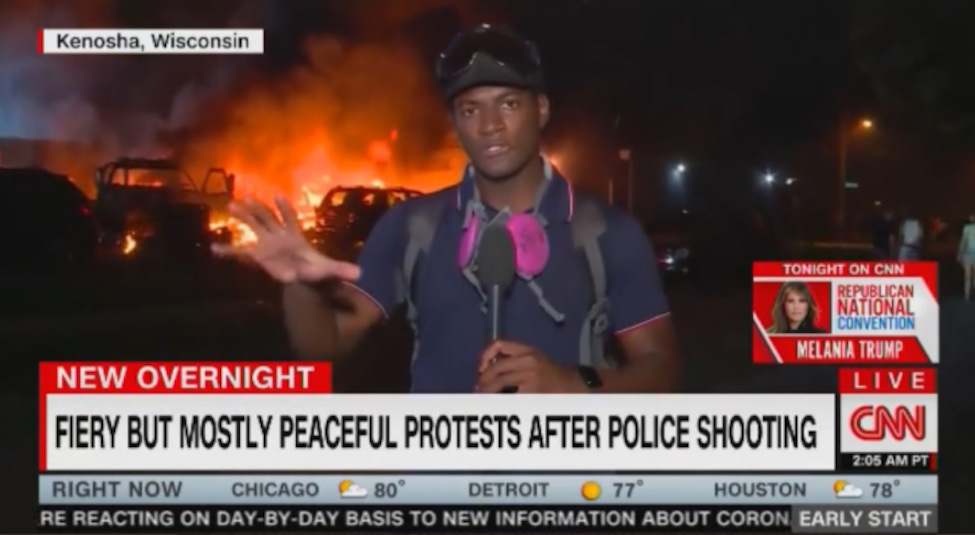 It’s hard to quibble with Berrien’s top five, though one might move them around a bit in order of importance and impact. There can be no argument, though, with his choice as worst of the worst: the media’s utter refusal to cover the Hunter Biden story in the weeks just prior to the election. In doing so, the media didn’t just put its finger on the scale; it put its shoulder on the scale.

“If the media were truly unbiased agents of truth and fact-finding,” Berrien writes, “they would’ve been all over the Hunter Biden story. Allegations of unethical business dealings and unsavory relationships with corrupt officials abroad are usually enough to leave any reporter chomping at the bit. Throw in the sex and drugs (of which there was plenty) and you’ve got a story destined for the front page. Call it willful ignorance, call it bias, or call it a good old-fashioned cover-up.”

We’ll take Door Number Three: It was a good old-fashioned cover-up. And it decided a presidential election. As a Newsbusters poll pointed out, “Full awareness of the Hunter Biden scandal would have led 9.4% of Biden voters to abandon the Democratic candidate, flipping all six of the swing states he won to Trump, giving the President 311 electoral votes.”

The media’s Hunter Biden cover-up — which included Big Tech’s censorship of its users’ ability to share the story — thus changed history. It was, in short, the stealing of the presidency. And if anyone’s looking for a smoking gun, CNN provided it in the form of comments made by the network’s political director, David Chalian, during an October 14 conference call: “Obviously, we’re not going with the New York Post story right now on Hunter Biden.”

The rest of Berrien’s Top Five includes the media’s willful gullibility in falling for the anonymous agent within the Trump administration back in 2018 (“anonymous” came forward in October); its refusal to give Joe Biden the Brett Kavanaugh treatment when Tara Reade came forward with credible allegations of sexual assault; its laughable categorization (see above) of full-out urban riots as “mostly peaceful” protests; and its wishful prediction of a “blue wave” election — an election that delivered losses to the Democrats up and down the ballot, all across the land, including a remarkable 27-for-27 running of the table in congressional races that the once-vaunted Cook Political Report called “toss-ups.”

The Top 20 collected by Justice dives a bit more deeply, recalling how the media portrayed Iranian terrorist Qasem Soleimani as a “war hero,” how it celebrated the phony impeachment of President Trump, how it downplayed the seriousness of COVID-19 before assailing the president for doing the same thing, how it called violent protests “peaceful” and peaceful protests “violent,” how it fell for the Bubba Wallace “noose” hoax, how it got played repeatedly by CNN’s Chris Cuomo and his bloody-handed brother Andrew, and the like.

We would be remiss to not mention the festering “fact-checker” genre that exploded in 2020 to yield rampant censorship by social media.

Lastly, if you’re as mad for media bias as we are, you might check out the work of Newsbusters’ Geoffrey Dickens, who’s pulled together a three-part collection of media gushing, pandemic politicking, and trashing of Trump supporters.

Enjoy the lumps of coal, fellow Patriots — and have a peaceful and blessed holiday.