‘Missing Context’ Is a ‘Fact-Checking’ Catch-All

These folks are as dishonest as they are troublesome for conservative media.

You may recall our ongoing struggle with the social media monolith Facebook and its merry band of independent “fact-checkers”. This is not the first time they have called us out for violating their version of the truth. It probably won’t be the last either, especially due to a rating category they like to call “missing context.”

We recently received yet another notification that we had broken the “rules.” What this time, you ask? We posted a meme containing verbatim, verifiable quotes from the likes of Kamala Harris, Nancy Pelosi, and Maxine Waters regarding leftist urban riots.

“They’re not gonna let up, and they shouldn’t.” – Kamala Harris

“I just don’t even know why there aren’t uprisings all over the country, and maybe there will be when people realize that this is a policy that they defend” –Nancy Pelosi

“If you see anybody from that [Trump] Cabinet in a restaurant, in a department store, in a gasoline station, you get out and you create a crowd and you push back on them, and you tell them they’re not welcome anymore, anywhere.” –Maxine Waters

The result? “Missing context” based on a fact-check article aimed at content that was merely similar to ours.

(We should note that a Twitter account called “Cuomo Watch” ran an experiment where they changed “Trump Cabinet” to “Cuomo Cabinet” in the Waters quote. The resulting Leftist outrage was telling, but not surprising).

Feel free to see our meme and decide for yourself. 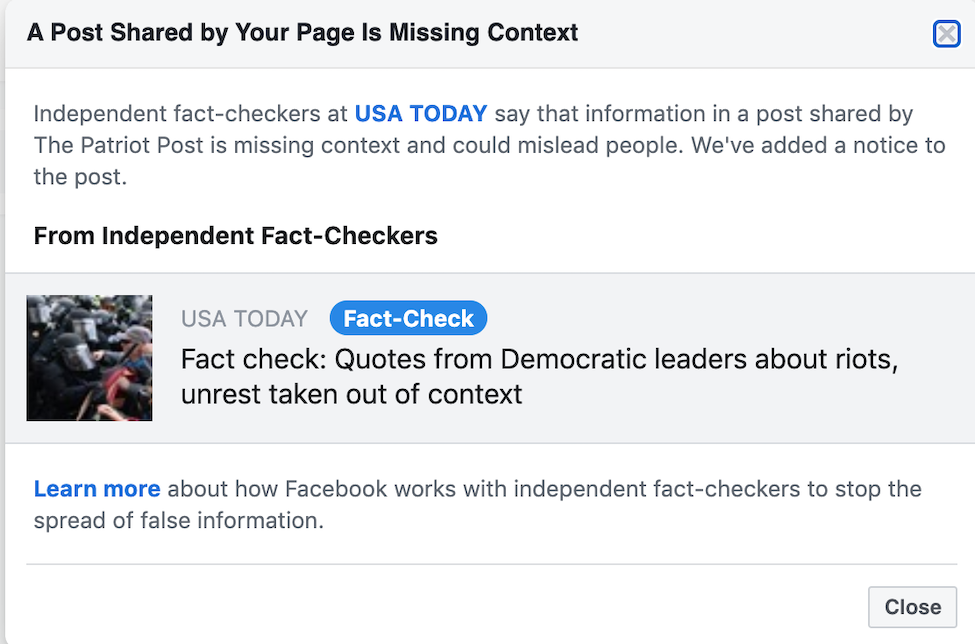 The USA Today “fact-checker” claims that our content could “mislead” people because it does not (presumably) tell the whole story. We understand taking things out of context — so does the media, which did it to Donald Trump all the time. But how is providing full word-for-word quotes in any way misleading? Shouldn’t people have the right to interpret the words of politicians themselves? And why was our meme, which didn’t even reference all the quotes mentioned in the original USA Today takedown piece, so generally grouped in merely because it’s similar?

All of this is beside the point, of course. In reality, “missing context” isn’t about truth or clarity at all. It’s a catch-all tactic that “fact-checkers” can use whenever it suits them, particularly when content they disagree with doesn’t tell their story. It’s an intellectually dishonest practice conducted in bad faith. It’s also a way for Facebook to take down sweeping examples of “similar” content using artificially intelligent bots, offering no recourse for those affected.

What’s to keep “fact-checkers” from applying this rating to anything and everything? Can a George Washington quote be flagged because it doesn’t tell America’s story through the eyes of the King of England? Should we only quote politicians when we can cite “context” in the footnotes (imagine a meme with footnotes)? Who gave the “fact-checkers” the right to be the universal interpreters of context in the first place?

The advent of “fact-checkers” has opened a dangerous precedent for free speech and free thought. These gatekeepers dominate significant portions of the public square, enforcing penalties on “wrongthink” among their opponents. “Fact-checking” is not honest journalism, and it interferes with the open conversation freethinkers should be able to have with one another.

We continue to fight the good fight against Big Tech and the social media giants, but we can’t do it without you. The best action you can take is to make sure you and your loved ones are subscribed to our email newsletter. It’s the only place where the “fact-checkers” can’t impose their opinions on us. Make sure everyone you know is subscribed to ensure our message is never silenced.

Update: In related news, see what “missing context” did to Maxine Waters and Andrew Cuomo.

Joe Biden Is Toxic Even to Democrats

“I have sworn upon the altar of God, eternal hostility against every form of tyranny over the mind of man.” —Thomas Jefferson (1800)