The Biden administration is getting it wrong on immigration and COVID. 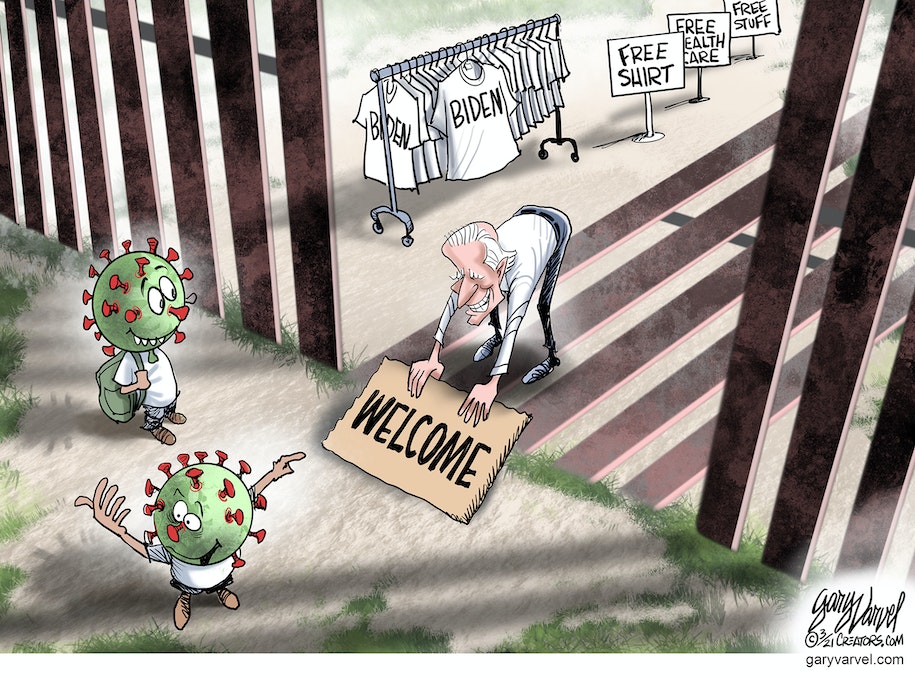 It’s no secret that the Democrat Party has only one “principle,” namely the acquisition and maintenance of power by any means necessary. And if that means taking a position today that is the polar opposite of a position taken yesterday, so be it. That such intellectual dishonesty and ideological bankruptcy requires large dollops of hypocrisy to sustain it is also no secret. Yet sometimes that hypocrisy is so blatant, and what it produces is so disconnected from rational thinking, it deserves highlighting. This is one of those moments.

On March 2, Texas and Mississippi decided that the time to end draconian lockdown measures was at hand, and both states eliminated mask mandates and other coronavirus-related restrictions on businesses. Texas Governor Greg Abbott, who stated that Texas is 100% open for business, expects Texans to behave like adults, making the restrictions unnecessary. “Make no mistake, COVID has not suddenly disappeared,” he stated. “COVID still exists in Texas, in the United States and across the globe. But it is clear from the recoveries, the vaccinations, the reduced hospitalizations and the safe practices that Texans are using, that state mandates are no longer needed.”

Mississippi Governor Tate Reeves, who lifted all mask mandates in the state except for K-12 schools and indoor arenas, echoed that sentiment. “We are lifting all of our county mask mandates and businesses will be able to operate at full capacity without any state-imposed rules. Our hospitalizations and case numbers have plummeted, and the vaccine is being rapidly distributed. It is time!” the governor tweeted.

Naturally, those who wish to retain as much control over Americans’ lives as possible were apoplectic. America’s unelected national scold, better known as Dr. Anthony Fauci, led the charge. “It just is inexplicable why you would want to pull back now,” he huffed.

The CDC also warned against rolling back safeguards. CDC Director Rochelle Walensky insisted, “[Virus variants] are a very real threat to our people and our progress. Now is not the time to relax the critical safeguards that we know can stop the spread of COVID-19 in our communities, not when we are so close.”

President Joe Biden was equally chagrined. “We are on the cusp of being able to fundamentally change the nature of this disease because of the way in which we’re able to get vaccines in people’s arms,” he said. “The last thing we need is Neanderthal thinking that in the meantime, everything’s fine, take off your mask, forget it. It still matters.”

Whether it matters or not remains to be seen. Moreover, whether or not this nation will ever be apprised of the full scope of the societal damage precipitated by extended lockdowns also remains to be seen. For almost a year, the idea that life is a series of tradeoffs was completely ignored. The only deaths that really mattered were COVID-related, even as extended lockdowns also precipitated suicides, drug overdoses, murders, and the deaths of people who needed treatment but were terrified to visit doctors’ offices or hospitals.

That uncomfortable reality was buried under a blizzard of nonnegotiable mandates issued by those with both a lust for power and wholesale contempt for individual choice. Slogans like “14 days to flatten the curve” and “30 days to stop the spread” were used to rationalize mandates that were often unconstitutional and unscientific.

Yet amidst the blowback from the likes of Fauci, Walensky, Biden, and countless others, the aforementioned unprecedented level of hypocrisy unfolds. In one of the largest contradictions ever foisted on the American public — one that would even make a Neanderthal blush with embarrassment — the Biden administration has reinstituted a program that completely undermines every assertion it has made about containing the coronavirus:

How contradictory is Catch and Release? While millions of Americans remain locked down and several states still maintain travel restrictions, the administration is not only releasing COVID-positive illegals but dispersing them throughout the nation.

“Felipe Romero, a spokesperson for Brownsville [Texas], said Wednesday that the 108 positives represent 6.3% of the number of total migrants who have been rapid-tested at the city’s main bus station, where they are being released by the Border Patrol,” Fox New reports. “Rapid testing of the individuals began there on Jan. 25. He added that Brownsville does not have the authority to prevent those who test positive from traveling elsewhere in the U.S. — and are advising them to quarantine, follow the Centers for Disease Control and Prevention (CDC) guidelines and socially distance.”

Does anyone seriously believe that “advising” quarantines for those who have already ignored laws and entered the nation illegally will suffice?

Miriam Izaguirre, an illegal from Honduras, was released by Border Patrol within hours of crossing the Rio Grande with her son. “Right now we were tested for COVID and they separated us … because we were positive,” Izaguirre stated. “We are waiting right now.”

Nonetheless, they were expected to board a bus to Houston, even as a bus company that operates out of the Brownsville station where they are located told the Noticias Telemundo Investiga news organization it cannot ask passengers for proof of coronavirus test results before boarding. Other COVID-positive illegals stated they were waiting to travel to Maryland, New Jersey, and North Carolina.

Remarkably, as of this writing, not a single member of the media has asked Fauci or Biden or any other member of this administration how they reconcile the irreconcilable. No one has asked the same CDC that advises against travel by Americans for spring break where it stands on wholly unrestricted travel by illegal aliens.

Homeland Security Secretary Alejandro Mayorkas insists what is occurring at the border is not a crisis, despite the reality that the number of unaccompanied illegal alien children entering America is on pace to exceed the all-time record by 45%. The Department of Homeland Security is projecting a yearly total of 117,000 unaccompanied minors crossing the border, including 6,000 migrants aged 16 and 17 caught just this month alone. Moreover, the Department of Health and Human Services is expected to reach its shelter capacity this month, meaning even more illegals will be released. And because Biden rolled back Donald Trump’s border-protection protocols and asked the Supreme Court to dismiss Trump administration challenges to withhold funds from sanctuary jurisdictions, thousands of additional migrants will be further incentivized by an administration that has quickly made a complete mockery of legal immigration and secure borders.

In short, the same collection of hacks more than willing to take American governors to task are precipitating what amounts to a fully coordinated super-spreader agenda of their own making.

Toward what end? A cynic — or is that Neanderthal? — might suspect that it’s a purposeful effort by our Ruling Class to make sure virus-related restrictions become permanent.

In the meantime, the CDC is hiring Coronavirus Quarantine Officers to help prevent the importation of communicable diseases from abroad, and their spread domestically. Its ad states, “The incumbents will be required to wear a uniform.”

Brownshirts would be very apropos.