The crisis at our southern border is one of Joe Biden’s making — and it’s meant to make more Democrats.

It’s not hard to imagine what the teeming masses of Central American immigrants are thinking today as they struggle toward our southern border or wallow in makeshift detention facilities: Now he tells us.

We’re referring to Joe Biden’s disingenuous comments yesterday — comments that he should’ve made two months ago and repeated regularly since then: “I can say quite clearly: Don’t come over. Don’t leave your town or city or community.”

Uh-huh, quite clearly. Setting aside the fact that no one believes a Democrat when he tells minorities to refrain from crossing our southern border, where was Biden’s moral clarity in the days just after he took office? Had he provided better leadership then, these young and ambitious people wouldn’t have fled their home countries and thereby further depleted Mexico, Guatemala, Honduras, and El Salvador of their already dwindling human capital. As Fox News’s Tucker Carlson put it, “In the name of solving an international crisis, they are as usual making it much worse.”

If only Biden had been as resolute in protecting our southern border as he is about, say, ensuring that the U.S. military provides free sex-change surgery to its “transgender” warriors, or ensuring that biological males can compete athletically against our daughters, we wouldn’t be facing the crisis we are now. And it is a crisis, regardless of how manfully the president’s team of dissemblers tries to tell us it’s merely “a challenge.”

A challenge. That was the phrase used by Homeland Security Secretary Alejandro Mayorkas earlier this month when he denied that there was a crisis and instead tried to shift the blame to the Orange Guy. “It takes time to build out of the depths of cruelty that the administration before us established,” he said. “What we are seeing now at the border is the immediate result of the dismantlement of the system and the time that it takes to rebuild it virtually from scratch.”

Got that? It was the “cruelty” of the Trump administration that kept our borders secure, cracked down on the coyotes and the human traffickers, and removed the incentive for making the arduous and deadly trek northward in the hopes of illegally entering our country.

But Mayorkas and his fellow Democrats changed all that. “We are not saying, Don’t come,‘” he said. “We are saying, 'Don’t come now.’ Because we will be able to deliver a safe and orderly process for them as quickly as possible.”

“A safe and orderly process” for what? Return from whence they came?

Remind us again what the role of the Department of Homeland Security is: to secure the homeland, or to invite a sustained invasion all along our southern border? Or to invite non-citizens to further drain our already-strapped government resources? Or to depress the wages of lower-skilled, largely Black and Brown Americans by way of a never-ending influx of cheap labor? Based on Mayorkas’s obvious affinity for illegal immigration, has there ever been a man less qualified for this role?

As Ken Cuccinelli, Mayorkas’s predecessor at Homeland Security, put it, “The ‘Biden effect’ is in full swing, with literally thousands of illegal aliens entering the country daily — with no COVID-19 checks, no social distancing in facilities and not enough facilities to handle the children in particular. But many of the newcomers were sure to wear their Biden t-shirts to the border.” 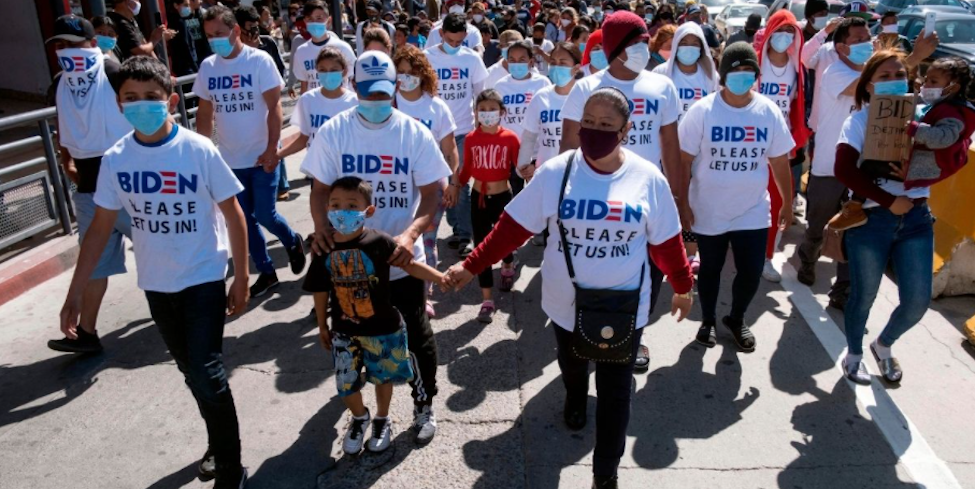 And it’s not just an influx of traditional migrants we’re talking about. Were it only about cheap labor, we might better understand the desire of these new elites to attract more maids, gardeners, nannies, dish washers, and pool cleaners. But as The Washington Times reports, House Republicans warned during a Monday border trip that migrants from Yemen, Iran, Sri Lanka, and elsewhere have been caught among the much larger numbers of Haitians, Central Americans, and others. “Individuals that they have on the watch list for terrorism are now starting to exploit the southern border,” said New York Representative John Katko, the top Republican on the House Homeland Security Committee. So the terrorists have taken notice of our easier-going border posture.

Clearly, then, what we have here is more than a challenge. Maybe it’s an emergency, given that the Biden administration this past weekend dispatched FEMA, the Federal Emergency Management Agency, to the border to help care for the thousands of unaccompanied migrant teenagers and children who’ve already made the trek.

Whatever name we give it, the American people are growing ever more concerned. According to a new Rasmussen poll, 73% of likely voters are concerned about what’s happening on the border, and the Biden administration’s amnesty plan is disfavored by a 51-45 margin.

For the Democrats, this is a self-inflicted wound. Donald Trump’s border policy was working. But they abandoned it just as they’ve resisted all Republican efforts to strengthen our borders in recent years. Why? Democrats, more than anything, crave power. They want to grow the size of government, they want to buy your allegiance by giving you “free” stuff, and they want a greater say in how you live your life. So every decision they make, every policy they promote, must be viewed through the prism of power.

Here, it’s a question of numbers. When Democrats see brown people, they see future Democrat voters. And they see a way to offset and even overwhelm the yawning fertility deficit they face compared to Republicans and conservatives.

Democrats are hell-bent on winning elections and maintaining power. And their border malfeasance is a powerful means to that end.