When our government offers up free money, we shouldn’t be surprised if the crooks beat us to it.

The least we could’ve done was set up this money-grab so good ol’ American crooks could steal the taxpayers’ money. Instead, it appears we shipped these lucrative jobs overseas.

“Unemployment fraud surged during the coronavirus pandemic,” reports Fox Business, “with billions of dollars likely ending up in the hands of foreign crime syndicates based in China, Russia and other countries, experts say.”

Total damage? Around $400 billion lost to fraud, according to estimates.

The U.S. treasury must look like prime rib to these fraudsters, given that one of the most noticeable characteristics of our bloated bureaucracy is its incompetence. After all, when a schlub can’t possibly be fired for poor performance, he tends to pursue the path of least resistance.

Still, even the most competent and conscientious of agencies would’ve been overwhelmed by the perfect storm of pandemic shutdowns, pandemic stimulus, and pandemic unemployment claims that hit the states last April. The graph below, built by Axios using data from the Bureau of Labor Statistics, gives us a good sense of the weekly claims onslaught. 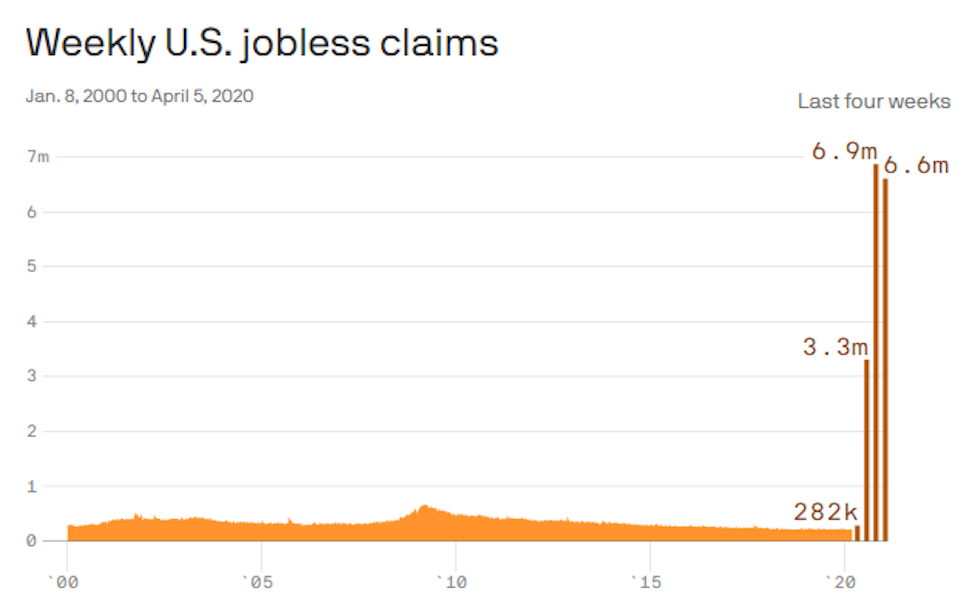 Thus, with state agencies overwhelmed by requests for free money, is it any wonder that fraudsters foreign and domestic had a field day? Unemployment fraud was never as lucrative as, say, healthcare fraud, but all that changed last year. Now scammers steal or trick us into allowing them access to our personal info, then they use it to make fraudulent claims. Simple. And with President Joe Biden still paying people not to work, and still spending money faster than his presses can print it, is there any end in sight?

“In the most predictable story of the Covid era,” writes the Wall Street Journal’s James Freeman, “it turns out that federal relief programs have been plagued with fraud and abuse. As for waste, well, that was always sort of the point. Shutting down much of the economy and attempting to replace it with federal spending, borrowing and money creation is not a strategy for productivity.”

The Biden administration was, predictably, quick to point the finger. “Widespread fraud at the state level in pandemic unemployment insurance during the previous administration is one of the most serious challenges we inherited,” said White House economist Gene Sperling, who also coordinates the so-called “White House American Rescue Plan.”

Right, Gene. “This is a howler,” as Freeman notes, “as if candidate Joe Biden and Democrats in Congress spent 2020 seeking to block Covid spending bills because they lacked robust accounting systems. In 2021, Mr. Biden enacted nearly $2 trillion in additional Covid-related spending even after it was clear the plan was no longer needed.”

James Madison would’ve seen this coming. “I cannot undertake,” he said, “to lay my finger on that article of the Constitution which granted a right to Congress of expending, on objects of benevolence, the money of their constituents.”

Sometimes, the most basic constitutional principles are the toughest to abide by.

In Brief: Supervillains Gather in Davos