In Brief: There’s Still No Rhyme or Reason to COVID

This pandemic does not hinge on whether the governor is a Democrat or Republican, whether restrictions are tight or loose.

“Two presidents. Fifty states. One-hundred-and-ninety-five countries. A multitude of different approaches. And still, there’s no rhyme or reason to this pandemic.” That’s how National Review analyst Charles C.W. Cooke begins his discussion of why the politics of COVID make little sense.

Vaccines help a great deal. That much we know. Beyond that, though, the coverage of the virus has mostly been partisanship and witchcraft.

He points to a chart of the coronavirus death rate per 100,000 divided by state and whether that state has a Republican or Democrat governor. The picture is … clear as mud. 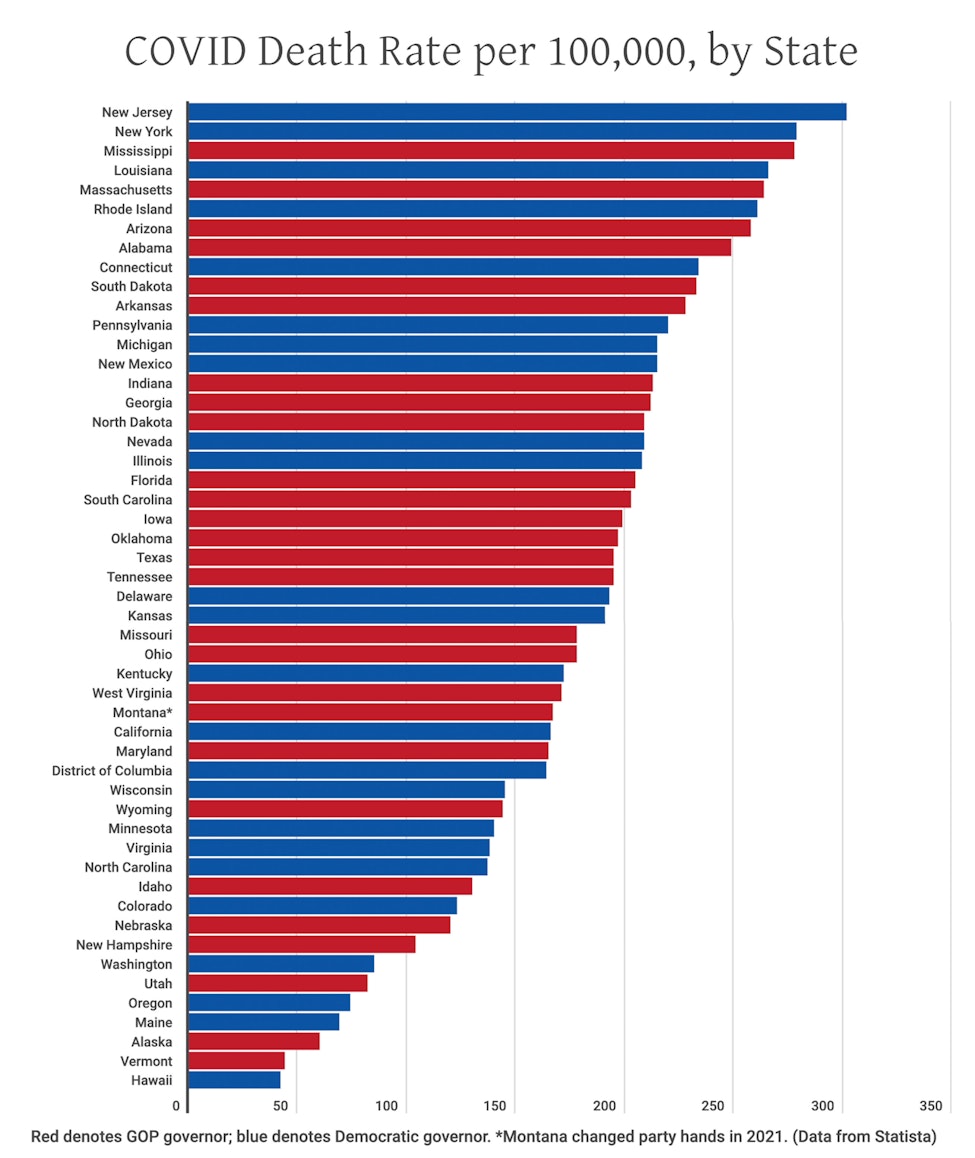 Confusing, isn’t it? Try as you might, you will not find a plausible way of blaming this on that party or region or policy that you hate.

There’s the effort to hammer Florida for its recent spike in COVID cases, but Cooke notes that even The New York Times admits, “Exactly why the state has been so hard-hit remains an elusive question.” Many were angry at that story:

What [these people] wanted the Times to say was that Red States Are Bad and Blue States Are Good — or, perhaps, as Paul Krugman argued [recently], that the North Is Good and the South Is Bad, Just Like During the Civil War. But this simply isn’t correct. If it were, what could possibly account for the death-rate pairings of New York and Mississippi? Of Alabama and Connecticut? Of Michigan and Arkansas? Of Texas and Delaware? Of Idaho and Colorado? For months, many in the press have banged on and on and on about Florida’s governor and then been shocked to learn that, even after a terrible spike — a spike that, mercifully, is beginning to fade — Florida’s record remains better than those of New York, New Jersey, Massachusetts, Rhode Island, Connecticut, Michigan, and Illinois.

There’s plenty more about Florida, but Cooke goes on to talk about Louisiana’s spike and “bad news coming out of Oregon” where tight restrictions are all the rage. It’s not just America, either:

Israel, which has done everything that the loudest critics on the Left wanted America to do, is nevertheless stuck in the throes of a devastating surge. Israel has instituted repeated and draconian lockdowns (enforced by drone, no less); it has used nationwide mask mandates; it has vaccinated everyone early — and even added booster shots into the mix; and it has even instituted a system of vaccine passports. And, right now? Well, it’s getting crushed. Per NPR, despite becoming “the first country on Earth to fully vaccinate a majority of its citizens against COVID-19,” it now “has one of the world’s highest daily infection rates. … Nearly one in every 150 people in Israel today has the virus.” I wonder: Is Israel a Red State or a Blue State?

Cooke concludes, “The uncomfortable truth is that, beyond developing, encouraging, and providing inoculation, there’s not much that any government can do to guarantee success — and, even when it does what it can, a lot of people are going to resist for reasons bad and good.”

Given how polarized we are at present, one can easily comprehend why, in its early days, so many political obsessives thought it might be efficacious to use the pandemic as a stick. But now? Eighteen months in? It’s beyond time for them to shut the hell up.

Half of American Infants Depend on the Welfare State