Actually, the social media giant hates the truth, especially when it comes to gender.

Hate is the Left’s ideological engine, and hate speech is the linchpin. To the Left, power equals truth — so he (or should we say she?) who holds the power is the truth. Labeling one’s rival as a “hater” is a favorite way to disconnect them from the train, and Woke Big Tech (Facebook) has pulled the pin again, this time on The Babylon Bee.

First, a little background. For those who don’t know, Amy Schneider now holds the second-longest winning streak in the history of the gameshow “Jeopardy!”. It has been claimed that Schneider is also the “winningest female” in the show’s history, which is factually false. This is, of course, because Schneider is biologically a male, which makes this story ripe for satirical commentary.

The Bee’s satirical headline was brilliant: “Trans Woman Breaks Jeopardy Record, Proving Once And For All That Men Are Smarter Than Women.” That proved too much for the thin-skinned but all-powerful Facebook branch of the Rainbow Mafia, which terminated the post to the article. To them, satire that they don’t like equals hate — especially when that satire suggests genuine truth.

Had the same joke been made even 10 years ago by any given comedian, no one would have batted an eye — in fact, they’d have laughed. Fast-forward to 2022 and truth even presented in a humorous way is considered hateful to the Woke Mob, and thus enforced by leftist Big Tech knee-breakers.

Seth Dillon, CEO of The Babylon Bee, has vowed to appeal Facebook’s action. Maybe greater prominence and deeper pockets will win the day, but we in our own humble shop know all too well how this could go. It was January 2020 when we received our first “hate speech” strike from Facebook for the following meme: 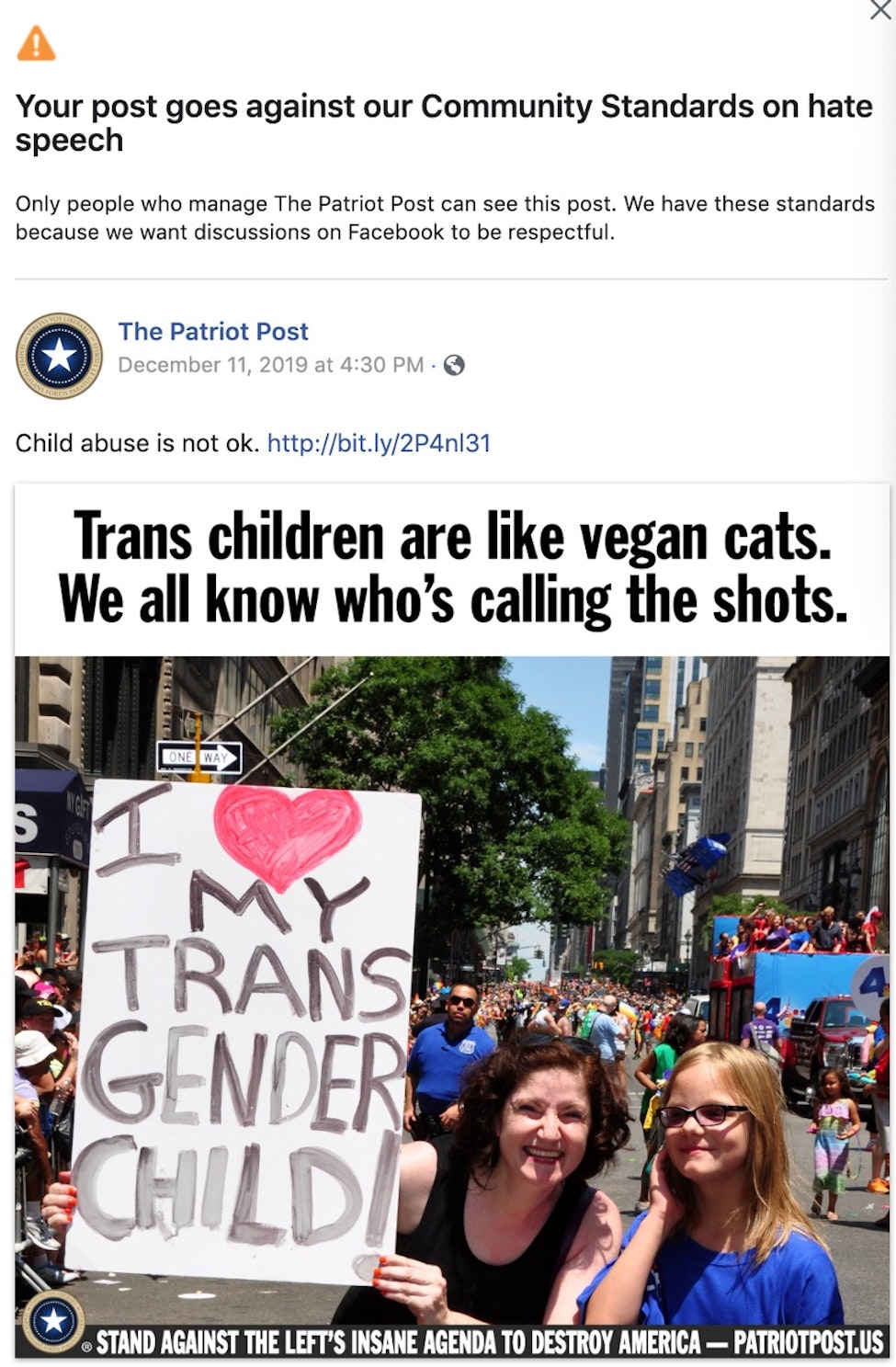 This would kick off a long and varying string of “violations” over the last two years, which has caused The Patriot Post to lose 80% of traffic from Facebook. Our countless appeals against such ridiculous “hate speech” accusations or bogus “fact-checks” have resulted in little justice for us. This is because the Left hates truth. Truth denies leftists the world created in their own image. Perhaps the only thing the Left hates more than truth is humor, because humor is often truth in its purest and most cutting form.

One Year After Biden Lost Afghanistan

Resisting the ‘Trans-ing the Kids’ Movement