The Battles of Lexington and Concord

The Battles of Lexington and Concord 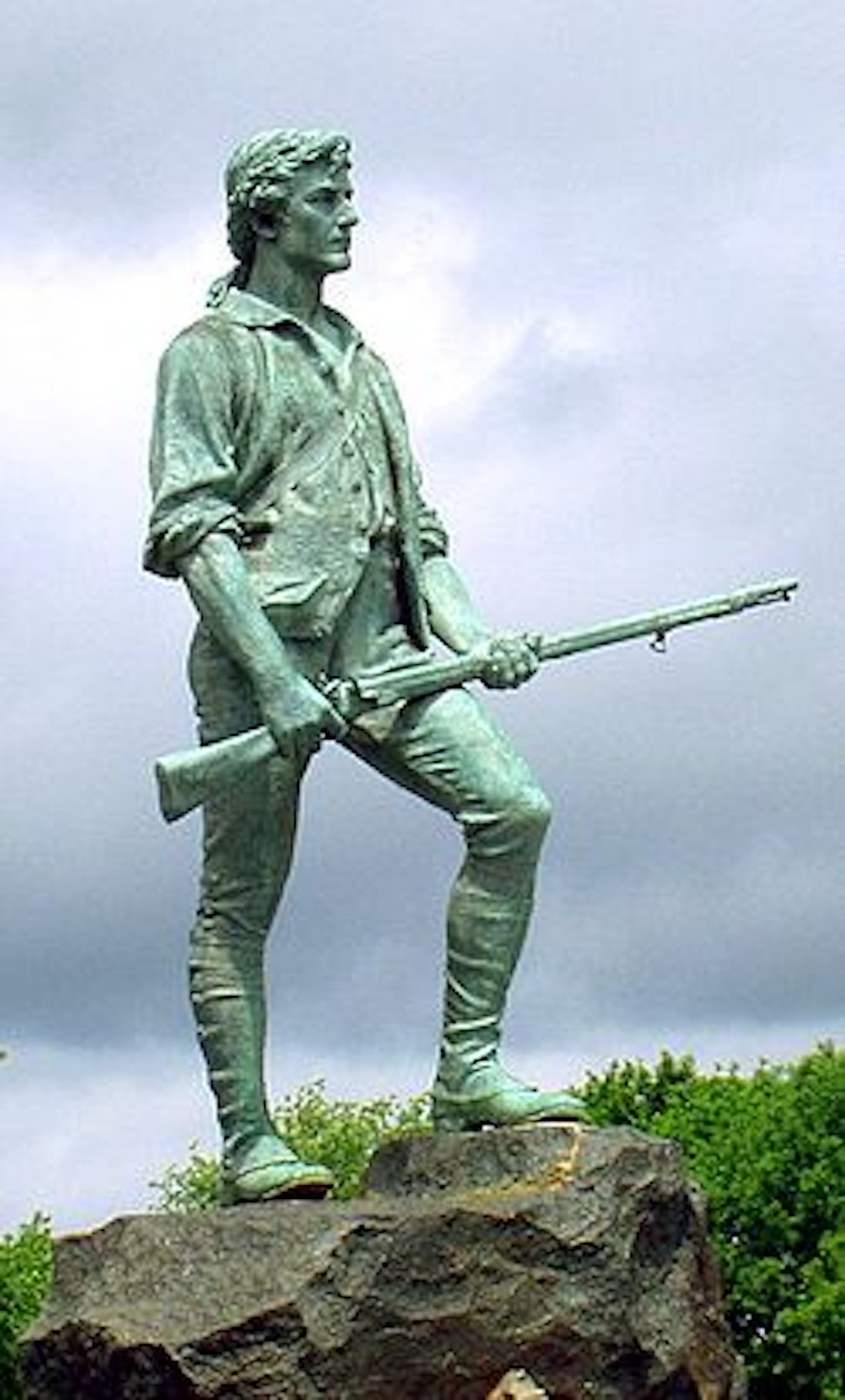 On December 16th, 1773, “radicals” from Boston, members of a secret organization of American Patriots called the Sons of Liberty, boarded three East India Company ships and threw 342 chests of tea into Boston Harbor.

This iconic event, in protest of oppressive British taxation and tyrannical rule, became known as the Boston Tea Party.

Resistance to the Crown had been mounting over enforcement of the 1764 Sugar Act, 1765 Stamp Act and 1767 Townshend Act, which led to the Boston Massacre and gave rise to the slogan, “No taxation without representation.”

In response to the rebellion, the British enacted additional punitive measures, labeled the “Intolerable Acts,” in hopes of suppressing the burgeoning insurrection. Far from accomplishing their desired outcome, however, the Crown’s countermeasures led colonists to convene the First Continental Congress on September 5th, 1774, in Philadelphia.

By the spring of 1775, civil discontent with Royal rulers was growing, and American Patriots in Massachusetts and other colonies were preparing to cast off their masters.

On the eve of 18 April 1775, General Thomas Gage, military governor of Massachusetts, dispatched a force of 700 British Army regulars, under Lieutenant Colonel Francis Smith, with secret orders to capture and destroy arms and supplies stored by the Massachusetts militia in the town of Concord.

However, Patriot militiamen under the leadership of the Sons of Liberty anticipated this raid, and the confrontation between militia and British regulars en route to Concord, was the fuse which ignited the American Revolution. 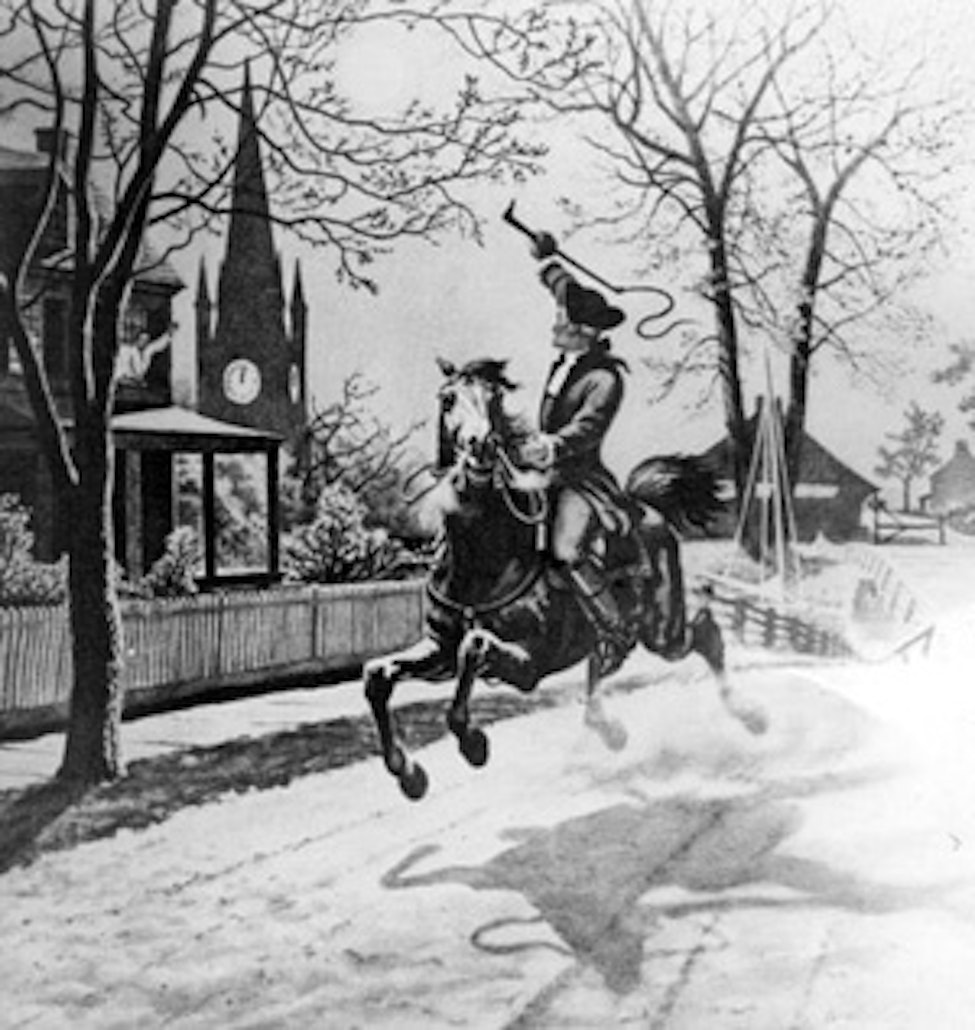 Near midnight on April 18th, 1775, Paul Revere, who had arranged for advance warning of British movements, departed Charlestown (near Boston) for Lexington and Concord in order to warn John Hancock, Samuel Adams and other Sons of Liberty that the British Army was marching to arrest them and seize their weapon caches. After meeting with Hancock and Adams in Lexington, Revere was captured, but his Patriot ally Samuel Prescott continued to Concord and warned militiamen along the way.

In the early dawn of April 19th, 77 militiamen under the command of Captain John Parker assembled on the town green at Lexington where they soon faced Smith’s overwhelming force of British regulars. Parker did not expect shots to be exchanged, but his orders were, “Stand your ground.” When a few links away from the militia column, the British Major John Pitcairn swung his sword, and said, “Lay down your arms, you damned rebels!”

Not willing to sacrifice his small band of Patriots on the Green, Parker ordered his men to hold fire and disperse. However, none laid down their arms as demanded by the British. As Parker’s men dispersed, the British opened fire. Eight of Parker’s men were killed and ten wounded. Parker later wrote in sworn deposition, “I immediately ordered our Militia to disperse, and not to fire: Immediately said Troops made their appearance and rushed furiously, fired upon, and killed eight of our Party without receiving any Provocation therefor from us.”

The British continued to Concord, where they divided up and searched for armament stores. Later in the day, the second confrontation between regulars and militiamen occurred as British light infantry companies faced rapidly growing ranks of militia and Minutemen at Concord’s Old North Bridge. From depositions on both sides, the British fired first on the militia, killing two and wounding four.

This time, however, militia commander, Major John Buttrick, yelled the order, “Fire, for God’s sake, fellow soldiers, fire!” Fire they did, commencing with “the shot heard round the world,” as immortalized by poet Ralph Waldo Emerson. In the ensuing firefight, the British took heavy casualties and in discord, retreated to Concord village for reinforcements, and then back toward Lexington.

In route to Lexington, the regulars took additional casualties, including those suffered in an ambush by the reassembled ranks of John Parker’s militia – “Parker’s Revenge” as it became known. The British were reinforced with 1000 troops in Lexington, but the King’s men were no match for the militiamen, who inflicted heavy casualties upon the Redcoats along their 20 mile tactical retreat to Boston.

Notably, the catalyst that launched the eight-year struggle for American independence, which we honor now as Patriots’ Day, had its beginnings with an effort by the government to disarm the people.

By the rude bridge that arched the flood, Their flag to April’s breeze unfurled, Here once the embattled farmers stood And fired the shot heard round the world.

The foe long since in silence slept; Alike the conqueror silent sleeps; And Time the ruined bridge has swept Down the dark stream which seaward creeps.

On this green bank, by this soft stream, We set to-day a votive stone; That memory may their deed redeem, When, like our sires, are sons are gone.

Spirit, that made those heroes dare To die and leave their children free, Bid Time and Nature gently spare The shaft we raise to them and thee.

PUBLISHER’S NOTE: We invite you to visit The Patriot Shop and celebrate our nation’s heritage by proudly displaying high-quality framed images of our Founding documents. Copies of our outstanding Essential Liberty pocket guide are also available for bulk purchase and distribution. The Patriot Shop also has the largest selection of official military-branch insignia items on the Internet. Also visit The Patriot’s Historical Documents pages for additional resources on America’s founding.

(Read “American Patriot Defined” for a full account of the Sacred Honor of these Patriots, and generations since.)