Clearing the Path for Harris to Bump Biden

Joe Biden has long past his cognitive expiration date.

“Wherever the real power in a Government lies, there is the danger of oppression.” —James Madison (1788)

In that letter, principal signer Jimmy Panetta (D-CA) asked that Biden give up his unilateral authority because, “Vesting one person with this authority entails risks.” Panetta tactfully noted, “Past presidents have threatened to attack other countries with nuclear weapons or exhibited behavior that caused other officials to express concern about the president’s judgment,” and asked that Biden “install additional checks and balances.”

Translation: “Mr. President, you are terminally non compos mentis, and we don’t want your finger alone on the launch button.”

Given the timing of that letter, combined with the fact that, since their “unity” inauguration, Biden’s uber-leftist president-in-waiting, Kamala Harris, has been rapidly assuming duties generally reserved for the president, is it any wonder that she’s now running an office pool on when she’ll bump Biden off his box?

Biden and Harris were swept into office on a tsunami of unverifiable bulk-mail ballots after a mass media pre-election cover-up of Biden’s ChiCom corruption — made possible by the collusion between the Democrat Party, their Leftmedia propagandists, and their Big Tech speech suppressors.

The Demo/media co-conspirators combined forces to elect Creepy Joe, but leftists of all ages were really supporting Harris. She is, like Bernie Sanders, the socialist they wanted, and indeed Harris voted with Sanders on 92% of legislation before the Senate in the two years she served.

The Biden/Harris ticket was the inverse of the Obama/Biden ticket, with the radical unknown on the top unable to draw the more moderate Demo voters without adding Biden. Last year, because Biden won the Demo primary in a large field of mostly leftist candidates, he needed a leftist on the bottom of his ticket to win.

In August of last year, when Biden announced Harris as his running mate — despite her abysmal primary performance — I titled my profile of Harris, “Actually It’s the ‘Harris-Biden’ Ticket. I wrote, "It may be ‘Biden-Harris 2020’ on the ballot, but it’s really Harris ‘21-'22-'23-'24, and she is a perilous Trump opponent.” Just ask Donald Trump!

Noting that Biden’s handlers completed their “selection of his [Insert Leftist Woman of Color Here] ticket requirement” just ahead of the Demo convention, it was clear that neither Michelle Obama nor Susan Rice passed Joe’s “sniff test.”

It was equally clear that the then-78-year-old Biden still had enough cognitive processing ability to know he was on borrowed time, even declaring himself a “transitional candidate” early in his campaign.

Recall that in public forums just before the election, Harris made a very deliberate reference to “a Harris administration, together with Joe Biden.” Following the script, the next day, Biden referenced a “Harris-Biden administration.” In Biden’s case, this might have been a “slip of the teleprompter,” but the point stands. Harris is at the helm and she is a perilous threat to Liberty.

I believe Rep. Nancy Pelosi and Sen. Chuck Schumer scripted Biden’s “transition,” the rapid succession setup to replace him with Harris. Their scheme is not unprecedented. In 1944, when it was evident to his Democrat Party handlers that Franklin Delano Roosevelt would not survive his fourth term, they tapped Sen. Harry Truman (D-MO) as his successor — who indeed did succeed FDR just months after his January 1945 inauguration for a fourth term.

Weeks before the election, Pelosi seeded the 25th Amendment legislation for Biden’s path to resign. As I noted then, “Pelosi’s target is, ostensibly, Trump. But if Biden wins, this will provide Democrats plausible deniability to remove him. Of course, he’ll be complicit in that political maneuver, and 'acquiesce’ to House Democrats in order to cover the fact that the real candidate has been Kamala Harris all along, thus not causing protest from his supporters that the transition was fixed before the election.”

And Trump agreed with that assessment: “Crazy Nancy Pelosi is looking at the 25th Amendment in order to replace Joe Biden with Kamala Harris. The Dems want that to happen fast because Sleepy Joe is out of it!!!” 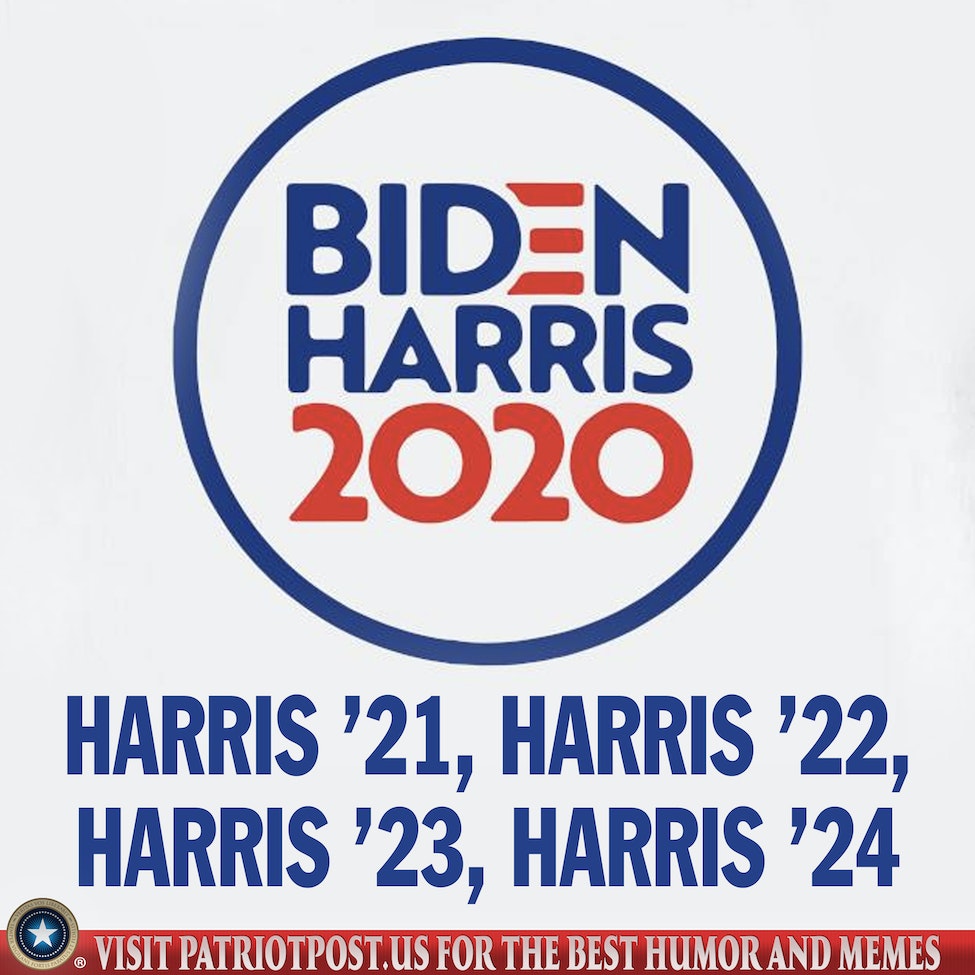 So, when will Joe go?

Indicative of how short the puppeteer strings are, now 40 days into his administration, Biden’s handlers have not allowed him to hold any solo press conferences. Recall that last year, candidate Biden went 89 days without a press conference. In effect, he is back in the basement again.

A week ago, after botching the names of members of the Texas Demo delegation, Biden said, “Uh, what am I doing here? I’m going to lose track here, and, uh, um…” Clearly, Joe is not well.

At a briefing this week, after fumbling remarks Biden said, “I’d be happy to take questions if that’s what I’m supposed to do…whatever you want me to do.” His handlers promptly cut the White House feed.

Indeed, political analyst Charles Hurt asked, “Can anyone just tell us who the hell is running our federal government right now? … Who is the president of the United States right now?”

The answer to that question is that Harris is managing the cadre of Biden handlers.

However, there are two serious Constitutional questions about when Harris will take over, and moreover, is she eligible to take over?

First regarding when, the Left may prop Biden up until at least two years and one day after his election. Section 1 of the 22nd Amendment states: “[N]o person who has held the office of President, or acted as President, for more than two years of a term to which some other person was elected President shall be elected to the office of the President more than once.” In other words, if Biden goes anytime in the first two years of his term, Harris would only be eligible of one more term, which is to say they may hold out until she could run for two full terms. Arguably, Harris has “acted as President” since Biden’s inauguration, but if she waits two years and a day, she could hold office for ten years instead of six.

And the second question, when Joe does go, when he hands the keys to Harris, there is a pesky constitutional question that will have to be resolved: Is Harris eligible to be president?

Before going there, for the record, we did not join the parade denying Barack Obama’s citizenship, because that was a rat hole down which a lot of conservative political capital was wasted. However, for those of us who still understand that our Republic is only as strong as the Rule of Law upon which it was founded, the question of Harris’s citizenship, and thus eligibility, is far more compelling than the questions raised about Obama.

Article II, Section 1 of our Constitution stipulates, “No person except a natural born Citizen, or a Citizen of the United States, at the time of the Adoption of this Constitution, shall be eligible to the Office of President…”

Though Harris was born in California, recall that her mother, Shyamala Gopalan, was a scientist who emigrated from India. Her citizenship status was unclear, and her father’s citizenship was listed as Jamaican. After her parents divorced, at age 12 Harris left the country with her mother to live in Montreal, where she spent her teenage years — years about which she says very little.

Her estranged father Donald Harris, from whom she inherited her slave-trading legacy, was a Stanford University economist who emigrated from Jamaica. The Stanford Daily described Harris as a “Marxist scholar,” whose tenure was being questioned because he was “a pied piper leading students astray from neo-Classical economics.”

Helping to explain Kamala’s hard leftist views, according to The New York Times, Donald and Shyamala met while attending a “black study group.” That group was actually the Afro-American Association, which championed communists Fidel Castro and Che Guevara. (Shades of Barack Obama’s father and his Marxist mentors.)

Of course, Leftmedia talkingheads (and even a few conservative outlets that should know better) reject any consideration of the Harris citizenship question, claiming it’s “racist” to bring it up. But whether Kamala Harris is a “natural-born” U.S. citizen has nothing to do with her race. It has only to do with the circumstances of her birth. Thus, the inquiry about eligibility is relevant.

Despite the Demos’ “open borders” agenda, key to establishing their “permanent majority” that subordinates the law and welfare of American citizens to their political objectives, the notion of “birthright citizenship” is erroneous. It is clear that the drafters and ratifiers of the 14th Amendment never intended it to confer citizenship on the children of illegal aliens or those in our country legally but who are not citizens.

Leftmedia “fact-checkers” who dismiss Harris’s parents’ status as irrelevant completely ignore that aspect of the question. In fact, parental legal status is the entire premise of the “anchor baby” debate.

When Harris arrives at the presidential podium, the Supreme Court will have to answer the question of her eligibility. And if it’s determined that she is not eligible, maybe that’s Pelosi’s plan — as the speaker is next in the line of succession for the presidency.

Meanwhile, the most perilous threat posed by a Harris presidency is not about race or birth status. The real threat to American Liberty is her leftist agenda. She’s a radical leftist fraud who cannot be trusted with power. I believe that, in advance of Biden being booted, Harris’s strategy has been to get most of her leftist agenda on the table so that it can be claimed that agenda was poor Joe’s agenda, and she just wants to honor that. Again, this has been a the set up from the first day she was considered for the Biden ticket.

Finally, Harris’s husband, white leftist Douglas Emhoff, is a lawyer whose firm specializes in business with the Red Chinese. Perhaps this is what former Secretary of State Mike Pompeo meant about Red Chinese “inside the gates.”

Andrew Cuomo’s Got to Go

“The natural cure for an ill-administration … is a change of men.” —Alexander Hamilton (1787)