Demos Don’t Give a Damn About Immigrants, Except…

Biden’s “open border” invite has incentivized human traffickers who prey on migrants and their children.

“The bosom of America is open to receive not only the Opulent and respectable Stranger, but the oppressed and persecuted of all Nations and Religions; whom we shall welcome to a participation of all our rights and privileges, if by decency and propriety of conduct they appear to merit the enjoyment.” —George Washington (1783)

A few years ago, my column “Demo Party Leaders Don’t Care About Immigrant Children” resulted in a great torrent of leftist outrage. How dare I suggest that the Left doesn’t care about poor illegal immigrants and their children?

Actually, what I wrote is that Demo Party leaders don’t care, other than their potential as a voter constituency. But an inescapable conclusion is that, by extension, those who support them don’t care either.

Today, let me make this clear — again: Neither the Biden/Harris regime nor the Schumer/Pelosi tag team give a flying flip about the welfare of illegal immigrants. They care only about expanding their constituency base, and they believe that their open-border policy is an excellent way to greatly expand that base.

Illegal immigrants are nothing more than political fodder for the socialist Democrat Party, a pathway to a permanent Democrat majority by way of their bulk-mail ballot fraud and the prospect of one-party states like California allowing illegal immigrants to vote. Demos want an open socialist voter pipeline to flood America with what they believe will be future constituents.

Back in the Obama years, Demos were still feigning concern for their blue-collar and union-worker constituencies. They routinely made fake political plays for Latino and Hispanic voters while pursuing policies that protected their traditional constituencies. Meanwhile, low- and middle-income American workers were experiencing immigrant competition for their jobs, which was also deflating their wages. The party that historically has claimed to stand for blue-collar America thus talked tough about illegals, but their proposals were all smoke and mirrors.

Before the Democrats realized their political future was in jeopardy, courtesy of a rude awakening in 2016, when they hemorrhaged voter blocs to Donald Trump, they professed great concern about illegal immigrants.

Barack Obama insisted: “We are a nation of laws. Undocumented workers broke our immigration laws, and I believe that they must be held accountable. When I took office, I committed to fixing this broken immigration system and began to do what I could to secure our borders. … We will [add] additional [border] resources for our law enforcement personnel, so that they can stem the tide of illegal crossing and to speed the return of those who do cross over. If you are a criminal, you will be deported. … We expect people who live in this country to play by the rules.”

And recall what his sidekick Hillary Clinton had to say about illegal immigrant children: “The numbers are increasing dramatically. … We need to do more to provide border security this side of Mexico. They should be sent back as soon as we can determine who their parents are. … We have to send a clear message that just because your child gets across the border, that doesn’t mean the child gets to stay. We don’t want to send a message that is contrary to our laws.” 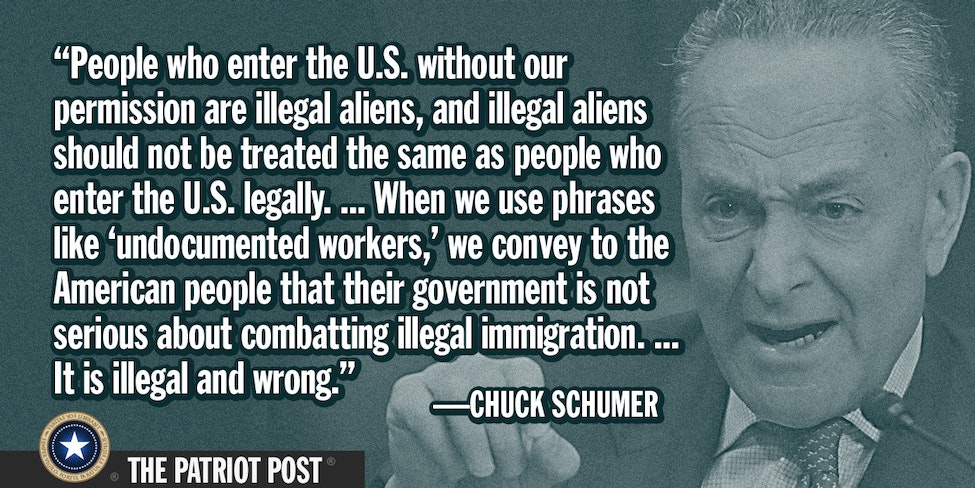 Or how about when now-Senate Majority Leader Chuck Schumer declared: “People who enter the U.S. without our permission are illegal aliens, and illegal aliens should not be treated the same as people who enter the U.S. legally. … When we use phrases like ‘undocumented workers,’ we convey to the American people that their government is not serious about combating illegal immigration. … I think it is illegal and wrong.”

After Trump was elected, rather than continue his predecessor’s “catch and release” policy — under which 98% of those apprehended failed to return for asylum or deportation hearings — he implemented a zero-tolerance policy. The result: In March of 2020, Trump’s last year in office, there were 34,460 illegal immigrants taken into custody after crossing our southern border.

Enter Joe Biden and his open-border policies inviting the surge of illegal immigrants. Among Biden’s first executive actions was to undo almost all of the Trump administration’s border security measures.

Consequently, in March of this year, there were 171,000 illegal immigrants and 19,000 unaccompanied minors apprehended. Biden’s policies have incentivized and greatly enriched human traffickers.

Former acting commissioner of U.S. Customs and Border Protection Mark Morgan said this week that at least 30,000 captured illegal immigrants have already been released into the U.S. “You’re not going to find that anywhere because they’re locking down the information,” Morgan said.

A key word in the illegal immigrant data is “apprehended.” The great unknown is the number of illegal immigrants, among them drug cartel mules, gang members, and terrorists, who made it across without detection.

Notably, DHS posted — then removed — its press release about the capture of two terrorists on the FBI’s watch list. Apparently, such transparency enhances concerns about Biden’s policies – and we can’t have that.

There is already plenty of illegal immigrant blood on Biden’s hands, but there is going to be more American blood on his hands. 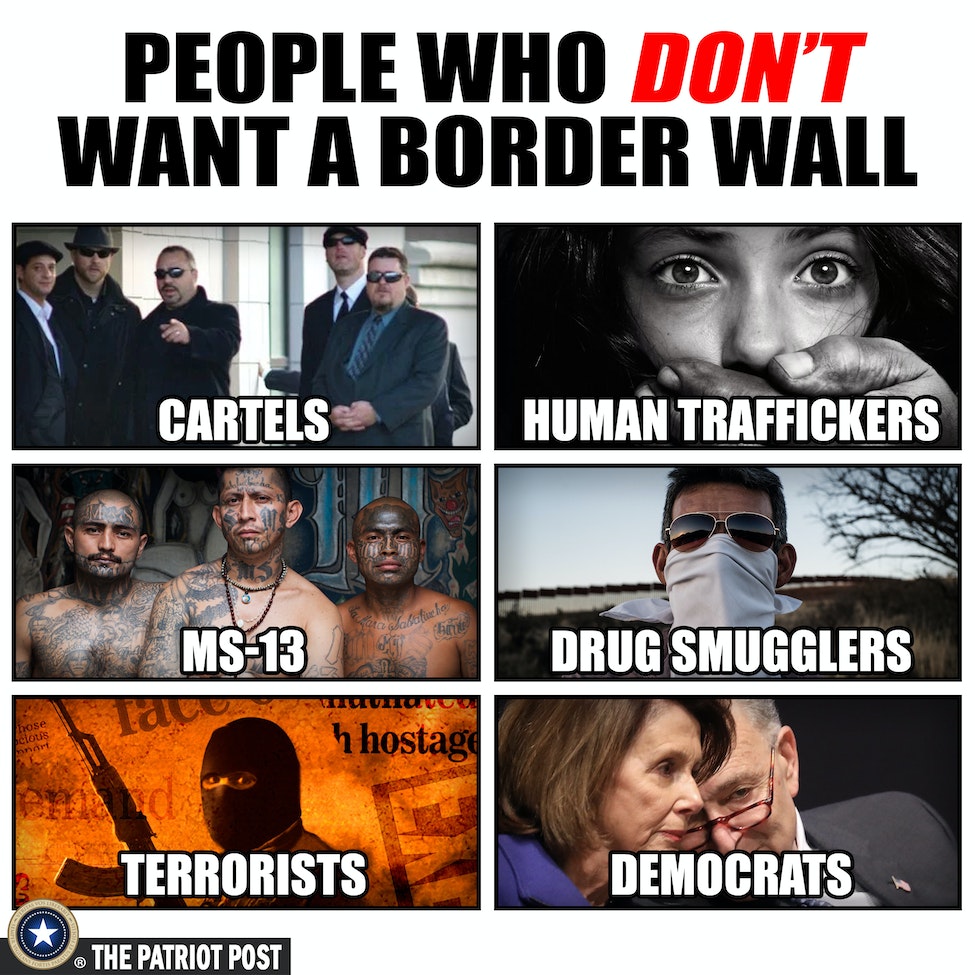 Amid the exploding humanitarian crisis Biden created on our southern border, he attempted to deflect criticism by appointing Kamala Harris as his “border czar.” However, Harris, wanting nothing to do with the crisis they created, has been AWOL.

Immigration policy analyst Stephen Miller, who is launching America First Legal to challenge Biden’s initiatives, thoroughly rebutted Biden’s pretense defense of his failed border policies: “[Biden] said he was resettling minors in the US in lieu of ‘let[ting] them starve to death and stay on the other side’ (Mexico) which he accused Trump of doing. This is spectacularly false and a grave smear on our border agents. … The [Trump administration’s] humane policies brought unaccompanied minor numbers to record lows. Biden’s disastrous decision to exempt minors from Title 42, and to stop the at-home reunification process in favor of domestic resettlement, single-handedly created this crisis. … Finally [Biden’s response] on revoking Trump’s proven border tools defies human logic. If you stop removing illegal immigrants, and instead release them en masse, then of course they will come in ever-larger numbers.”

According to White House Press Secretary Jen Psaki: “We don’t take our advice or counsel from former President Trump on immigration policy, which was not only inhumane, but ineffective over the last four years. We’re going to chart our own path forward.”

This amid Biden administration plans to reimplement some of Trump’s border wall construction (despite President Post Turtle’s promise that not “one more foot” of wall would be built), in order to appear he is doing something about the surge. To complement that pretense, Biden’s DHS Secretary, Alejandro Mayorkas, who has previously rolled out the welcome matt for illegal immigrants, claims his agencies are going to crack down on sanctuary cities.

And a reminder about that “11 million illegal immigrant” number that the Demos’ and their Leftmedia propagandists constantly repeat. That number is more accurately estimated to be as many as 29.1 million.

But what’s another 10 or 20 million illegals when you’re trying to permanently alter the fabric of the nation? If Joe Biden and Kamala Harris have their way, all of these illegals will get in line to vote “D” in return for all the free stuff and the promise of citizenship.

And while Biden is busy allocating billions of taxpayer dollars for illegal immigrant housing, food, and healthcare, more than a half-million Americans are homeless — many of them veterans.

Footnote: Patriots, while our annual budget is a drop in the bucket compared to the big Beltway organizations, our influence and outreach certainly are not. Countless grassroots and grasstops conservatives rely on The Patriot Post as a steadfast touchstone for Liberty, and we remain the most cost-effective conservative force multiplier on the Web. We have launched our 2021 Patriots’ Day Campaign. Please help us extend Liberty to the next generation of American Patriots.