Rights Endowed by Whom?

What is really at stake?

“The preservation of the sacred fire of liberty, and the destiny of the republican model of government, are justly considered deeply, perhaps as finally, staked on the experiment entrusted to the hands of the American people.” –George Washington 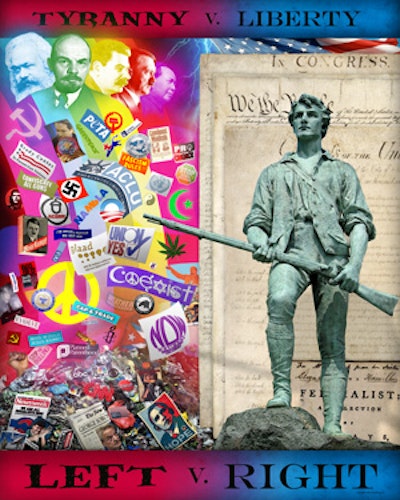 Their is a substantial grassroots resurgence underway, focused primarily on restoring constitutional integrity. It is reminiscent of that inspired by Ronald Reagan 30 years ago.

The stakes of our national elections are much higher than a mere contest between competing political platforms and personas. They determine who is this nation’s arbiter of “Life, Liberty and the pursuit of Happiness.”

Barack Hussein Obama, by way of omission in recent speeches, has made it abundantly clear whom he and his comrades reject as the author of the Rights of Man. On five separate occasions, when speaking at public events or fundraisers for his Leftist comrades, Obama has referenced the Declaration of Independence.

Speaking at the Hispanic Caucus Institute’s Annual Awards Gala, Obama said, “We hold these truths to be self-evident, that all men are … endowed with certain inalienable [sic] rights: life, liberty and the pursuit of happiness.” When questioned about the omission of who, precisely, endowed those rights, the White House press office claimed that Obama went off script … unlikely for a man who has been glued and tattooed to his Teleprompters.

A few days later, speaking at a fundraiser for the Democratic Congressional Campaign Committee, Obama said, “If we believe that … everybody is endowed with certain inalienable [sic] rights and we’re going to make those words live, and we’re going to give everybody opportunity, everybody a ladder into the middle class…” For the record, that utterance was not “off script.” Rather, it was precisely how the White House posted his speech.

At the Democratic Senatorial Campaign Committee fundraiser, he did it again, saying, “What makes this place special is not something physical. It has to do with this idea that was started by 13 colonies that decided to throw off the yoke of an empire and said, ‘We hold these truths to be self-evident, that all men … are endowed with certain inalienable [sic] rights.’”

In each instance, Obama omitted the Declaration’s clear affirmation that the Rights of all people are “endowed by their Creator,” not by some potentate or government.

When asked about Obama’s omission, White House Press Secretary Robert Gibbs asserted, “I can assure you the president believes in the Declaration of Independence.”

Mr. Gibbs’ assurances notwithstanding, Obama’s subtle but telling omissions expose the underbelly of the political beast that is intent on devouring Essential Liberty and replacing it with the rule of men.

So, Obama “believes in the Declaration”? The Declaration is a piece of paper, one that expresses a self-evident Truth. Were it destroyed today, or had it never been written, the right of all people to “Life, Liberty and the pursuit of Happiness,” among other Rights, would still be endowed by our Creator.

Allow me to offer an elementary civics lesson in order to answer the question, “Who endows the Rights of Man, God (as ordained in natural law) or government (as ordained by man)?”

Perhaps most offensive was his errant assertion in an internationally televised speech from Indonesia, that “our motto is E pluribus unum – out of many one.” Our national motto is, of course, “In God We Trust.”

With his omissions and ignorance of our national motto now a matter of public interest, Obama has tossed “our Creator” into his stump speechs before Election Day. But make no mistake: That would be subterfuge. Obama believes that the Rights of men are subject to the rule of men, and the terminus of the unabated rule of men is always tyranny.

The election of Barack Hussein Obama was the worst of insults to our nation’s heritage of Liberty, but in one important way, it has proven a blessing in disguise.

It has drawn millions of Americans to the frontlines of the eternal war for Liberty and Rule of Law, as enshrined in our national Constitution. Still, this midterm election cycle is different than the knee-jerk response to Bill Clinton that seated a Republican majority back in 1994.

There is a Great Awakening across our nation, one being spearheaded by Tea Party Patriots who are armed with, among other things, the right tools to articulate the difference between Rule of Law and rule of men, and who are willing to passionately fight for the former over the latter.

In the words of Thomas Paine, “I call not upon a few, but upon all: not on this state or that state, but on every state; up and help us; lay your shoulders to the wheel; better have too much force than too little, when so great an object is at stake.”

At this moment, the future of Liberty is at stake.

I know that you have “pledged your sacred honor” for the defense of Liberty. I beseech you to help us muster millions of additional Patriots to the frontlines for the battle ahead.

It’s All Omar but the Crying

Free Healthcare Is Getting More Expensive

“The eyes of the world being thus on our Country, it is put the more on its good behavior, and under the greater obligation also, to do justice to the Tree of Liberty by an exhibition of the fine fruits we gather from it.” —James Madison (1824)