The Seceding States of America

A poll that explores Americans’ desire to depart from the union reveals some “arrestingly high” support.

We’re not sure what the folks at YouGov and Bright Line Watch were expecting when they did the polling, but we probably could’ve saved ‘em a lot of time and money — especially in their topline results, all of which suggested that our nation is deeply divided.

Just how divided? Consider the results of this question, which was just one among many:

President Biden made it a signature goal to reunite a country scarred by partisan and regional divides. Our surveys seek to assess whether the animus that characterized the Trump era persists. We therefore repeated a question from our January/February 2021 survey asking respondents in our public sample about their support for breaking up the United States. As in last winter’s survey, we asked respondents the following:

“Would you support or oppose [your state] seceding from the United States to join a new union with [list of states in new union]?”

As in the previous survey, levels of expressed support for secession are arrestingly high, with 37% of respondents overall indicating willingness to secede. Within each region, the dominant partisan group is most supportive of secession. Republicans are most secessionist in the South and Mountain regions whereas it is Democrats on the West Coast and in the Northeast. In the narrowly divided Heartland region, it is partisan independents who find the idea most attractive.

If we consider Joe Biden’s inaugural pledge, wherein he promised to “work as hard for those who didn’t vote for me as those who did,” we might call this “The Unity Question.” We might also look back to that pledge and see, in retrospect, how disingenuous it was, and how unsurprising these polling results actually are. Take a look at the map: 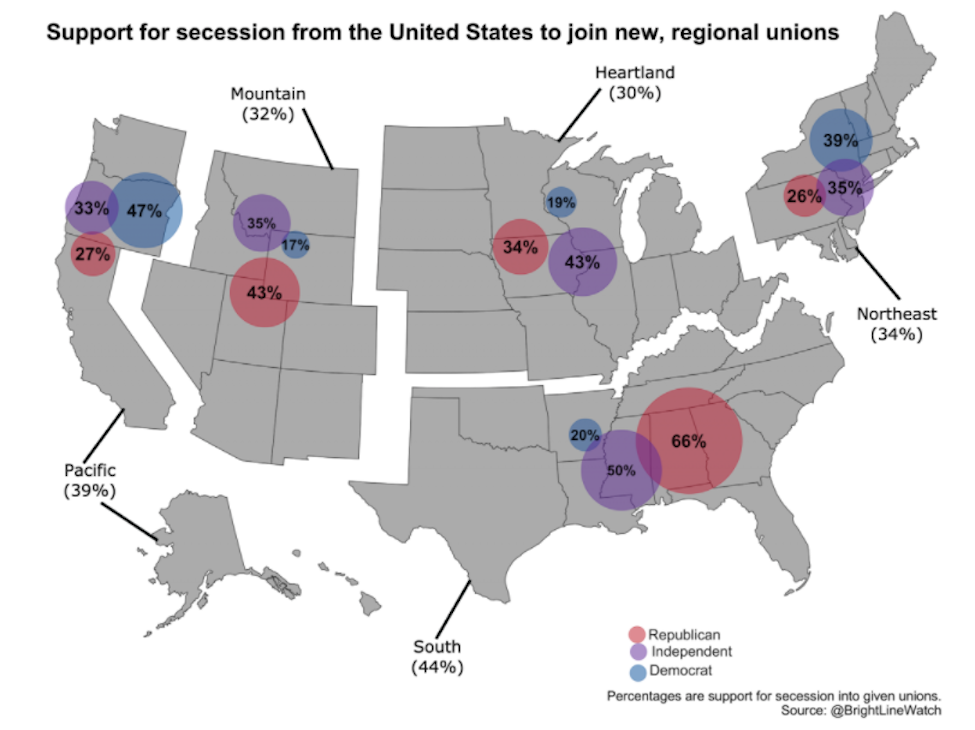 As the survey’s authors note: “These patterns are consistent from our January/February survey, but the changes since then are troubling. Our previous survey was fielded just weeks after the January 6 uprising. By this summer, we anticipated, political tempers may have cooled — not necessarily as a result of any great reconciliation but perhaps from sheer exhaustion after the relentless drama of Trump.”

What comes across as an interesting and deeply detailed survey is, unfortunately, corrupted by the bias of the polling organization, Bright Line. Language like “the relentless drama of Trump” gives the game away. Another giveaway: Many of the questions poll not only Republicans and Democrats but “an expert sample of political scientists” as well. And in every case, these “experts” track even further left in their responses than do the Democrats. For example, DC statehood and the abolition of the filibuster are overwhelmingly supported by these political scientists, while “policies that limit voting” (note the partisan nature of that phrasing) and local officials refusing to certify election results meet with near-unanimous opposition.

More evidence of the pollsters’ bias can be found in the wording of their topline results. For example: “Among the electoral reform proposals recently adopted or currently under consideration in the states, experts perceive grave threats from bills that encroach on the political independence of local election officials and that restrict mail voting.” And this: “Experts rate Donald Trump’s continued refusal to accept the results of the 2020 election as highly abnormal and important.”

In sum: Yes, we’re a deeply divided nation. Yes, Joe Biden has exacerbated that divide. And yes, pollsters should be viewed with great suspicion.

The J6 Inquisition and Big Tech

Biden Was Warned Months Before Pullout of Taliban Takeover