Our 25th Constitution Day … Thank You!

Our large and influential fellowship of Patriots has been together now for a quarter-century.

September 17th is a significant date on our Patriot Post calendar for two reasons.

First, of course, it is Constitution Day: the anniversary of the adoption of our Republic’s founding contract — that date in 1787 when our Constitution was signed by the Constitutional Convention delegates in Philadelphia.

Despite all the blood that has been shed for generations to defend the Liberty enshrined in our Constitution, many of those occupying the executive, legislative, and judicial branches of our national government today pay no homage to the essential obligations inherent in that historic document. Some have outright contempt for Rule of Law, and utter disregard for their sworn oaths “to support and defend” our Constitution.

To those tyrants and those who line up with them, I invoke the words of Samuel Adams in 1776 at the dawn of the fight for Liberty: “If ye love wealth better than liberty, the tranquility of servitude than the animating contest of freedom, go from us in peace. May your chains sit lightly upon you, and may posterity forget that ye were our countrymen!”

The contempt some hold for Liberty has rarely been more manifest than in the current administration of Joe Biden, Kamala Harris, and their socialist Democrat Party cadres, who are ever advancing the power of the state over “We, the People.”

But such disregard does not alter the fundamental and unalienable Rights of Mankind enumerated in our Declaration of Independence and codified in our Constitution.

The second reason September 17 is important on our calendar is that it marks the date we first published on the Web — now 25 years ago.

In 1996, back before the Internet and email were ubiquitous means of communication, I gathered a handful of modern-day Patriots to contemplate how we might best take the eternal message of American Liberty to fellow Patriots nationwide. As with any entrepreneurial startup, especially one that had never been done, there was considerable trial and error, and the commensurate heartburn.

At that time, we were four years removed from George H.W. Bush having failed to continue the great American renewal launched by Ronald Reagan. Bush was thus defeated in his reelection bid by a then-unknown but young and charismatic Bill Clinton. I remember feeling a sense of urgency to determine how to counter the relentless Leftmedia propaganda machine that would ultimately help ensure Clinton’s reelection.

Rush Limbaugh had already launched his radio rebuttal to the Left and was leading that media charge. An outfit called Fox News was testing the cable network possibilities as a conservative news platform. So what other front did we need to cover?

Liberty was waiting for its voice on a new communication medium that looked very promising — the Internet. We answered that call, and we are now the longest-serving conservative news and policy publication on the Web.

Not only did we break uncharted ground on the Web, our business model created some uncharted heartburn for our legal advisers, bankers, and accountants.

We decided to incorporate as a “for profit” business so the IRS could not regulate our content, but we would be donor-supported to avoid any subscription charge for our large military and student constituencies.

Additionally, we decided to be ad free. We do not accept any advertising to ensure our advocacy and editorial content is not shaped or restrained by commercial influence, as is the case with all mass media outlets. Thus, you will note our website and email editions are free of the offensive advertising that clutters commercial news websites.

Bottom line, we are not sustained by any political, special interest, or parent organization — but solely by the good will of our supporters.

But by the Grace of God, within months of our launch we had more than 5,000 subscribers.

The road to 25 has been very challenging, not just because all business start ups struggle and managing a small business creates constant challenges, but because of the nature of the work we do. Sorting through the wasteland of detritus the Left leaves in its wake is as relentless a task as are our deadlines.

And now, The Patriot Post has millions of readers, and we have operated in the black since our first year.

The result of this endeavor was the creation of a very large fellowship of brothers and sisters devoted to Liberty.

We have been together now for a quarter-century.

Over the last 25 years, countless subsequent news startups have come and gone. But thanks to the steadfast support of Patriots like you, and the tireless efforts of our devoted team of writers, editors, technical and creative staff, and support personnel, The Patriot Post has grown from its humble beginnings into a highly acclaimed touchstone of Liberty for conservative grassroots leaders across our nation. 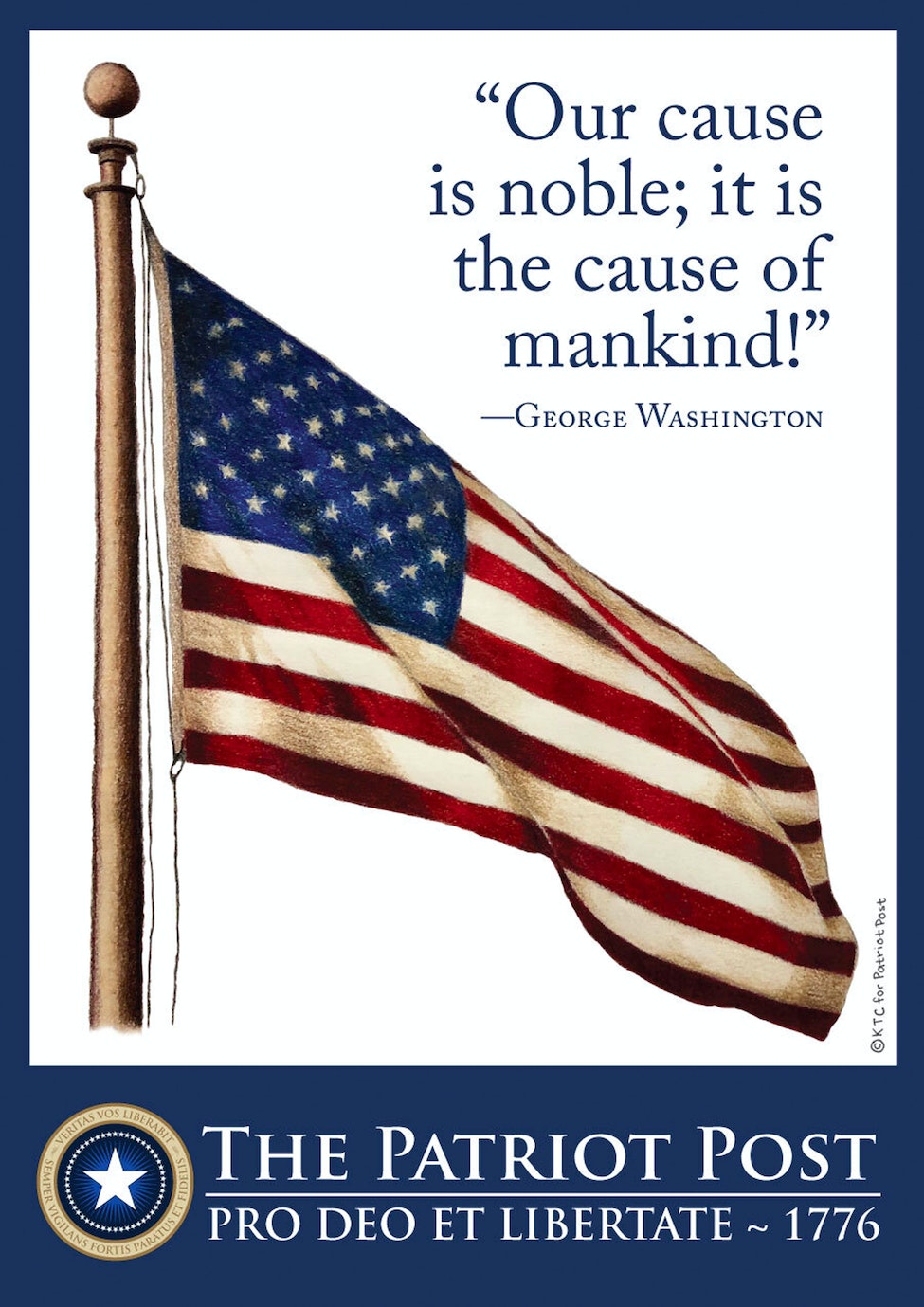 From the onset, our mission has been to extend the endowment of American Liberty to the next generation by, first, advocating for individual rights and responsibilities; second, supporting the restoration of constitutional limits on government and the judiciary; and third, promoting free enterprise, national defense, and traditional American values, as outlined in our Statement of Principles.

Our mission and objectives rest on the foundation of this essential affirmation: “We hold these Truths to be self-evident, that all Men are created equal, that they are endowed by their Creator with certain unalienable Rights, that among these are Life, Liberty, and the Pursuit of Happiness.” We believe that all people are created with equal value and dignity, and that the Judeo-Christian faith is both the foundation upon which this affirmation rests and its eternal guardian.

Our mission is not framed as Right vs. Left, Conservative vs. Liberal, nor Republican vs. Democrat. Our mission and advocacy — and that of all genuine Patriots who embody the legacy and spirit of the Founders — is framed by our commitment to Liberty over tyranny. Above all, we are devoted to the Gospel framework for Liberty, irrevocably endowed by our Creator.

Our objective remains to equip the current generation of American Patriots with concise but comprehensive analysis of the most important news and policy from a First Principles perspective. We have never wavered from our mission and objectives.

If tasked with choosing the most important guiding principles from all the timeless wisdom that has motivated and stewarded our mission, it would be these words from Jesus of Nazareth in John, chapter 8: “If you abide in My word, you are My disciples indeed. And you shall know the truth, and the truth shall make you free.” The last of those words is captured in our motto, Veritas vos Liberabit. That, combined with Christ’s words in Luke, chapter 12: “From everyone who has been given much, much will be demanded; and from the one who has been entrusted with much, much more will be asked.”

Second to those guiding words would be these from George Washington during the American Revolution. Regarding the fight for Liberty, he wrote, “Our cause is noble; it is the cause of mankind!” And it was, thus, to this day, and forever will be.

Fellow Patriots, thank you for standing fast and firm regardless of the challenges we face. Remember who YOU are, brothers and sisters — and who WE are together. Thank you for supporting our exceptional team, many of whom have been with us for the majority of our 25 years, and others across the nation who have joined us along the way.

I owe our team, and each fellow Patriot reading these words, a great debt of gratitude for keeping the fires of American Liberty burning bright on the pages of The Patriot Post. It is with a heart of humility that I lead our team forward. The Patriot Post is thriving, and we have entered the third decade of this century lean and mean!

I owe the same debt of gratitude to my father, who was my mentor and inspiration, and to my wife and three now-adult children, who, each in their own way, have been very supportive over all these years.

On behalf of our staff and our National Advisory Committee, thank you for allowing us to serve you. We are, as always, humbled to count you among our Patriot ranks.

Fundamental Transformation Sure Is Expensive

“If, from the more wretched parts of the old world, we look at those which are in an advanced stage of improvement, we still find the greedy hand of government thrusting itself into every corner and crevice of industry, and grasping the spoil of the multitude. Invention is continually exercised, to furnish new pretenses for revenues and taxation. It watches prosperity as its prey and permits none to escape without tribute.” —Thomas Paine (1791)