Demos: “Move on, nothing to see here, but look over there at the RNC endorsement of that J6 riot!”

For the past week, socialist Demo Party protagonists have been desperately scrambling to divert media attention from the collapse of their highest-profile pet political constituency front, the violent Marxist movement deceptively known as Black Lives Matter.

To achieve this “look at the shiny thing” distraction, they’ve been feigning outrage over the Republican National Committee censure of Reps. Liz Cheney of Wyoming and Adam Kinzinger of Illinois for playing leading roles in Nancy Pelosi’s inquisition theater. According to the resolution, “Cheney and Kinzinger are participating in a Democrat-led persecution of ordinary citizens engaged in legitimate political discourse.”

Demos insist this is an endorsement of the Capitol riot, and typical of their ludicrous lying Leftmedia diversions was this New York Times headline: “G.O.P. Declares Jan. 6 Attack ‘Legitimate Political Discourse.’”

For context, let me reiterate that the group of thugs who confronted police outside the Capitol building, and the larger group of protesters who illegally entered the building, were outliers, most of whom had attended the large Donald Trump rally prior to the Capitol incursion. But the objective of Pelosi’s histrionic “Insurrection™ inquisition” of the J6 protest goes far beyond what happened in the Capitol building. It is a broad-sweeping attempt to paint all Trump supporters in DC that day, and by extension across the nation, as extremist insurrectionists.

To that end, RNC Chairwoman Ronna McDaniel clarified that the censure reference to ordinary citizens who engaged in legitimate political discourse “had nothing to do with violence at the Capitol,” despite the fact Democrats and their propagandists spun it as an endorsement of the “attack.”

But Pelosi’s spinners were out in full force with the attack endorsement claim. A case in point: Referring to the RNC resolution, Rep. Jason Crow (D-CO) asserted on CNN that police were murdered by Trump rioters: “In what scenario does killing police officers … become classified as legitimate political discourse? … This shows how far the Republican Party in Washington DC has become from the nation of the American People.”

The gross irony of Crow’s false assertion, which went unchallenged by CNN host Pamela Brown and every other “fact-checker” before this column, is that the police officer Pelosi and Chuck Schumer (D-NY) claimed was murdered by J6 protesters, CPD Officer Brian Sicknick, was used as a dead cop prop by Democrats until their lies about his death were completely debunked months after the fact, when they allowed the release of the DC medical examiner’s cause of death.

That’s grossly ironic also because, in the six months before the J6 protests, cops and many others were actually being murdered by Democrat-backed groups, including their Black Lives Matter constituents.

As we have documented previously, in May of 2020, Democrats used the unjustifiable death of a criminal thug as fodder to promote the BIG Lie that our nation was besieged with systemic racism.

After Pelosi and Schumer kneeled for George Floyd in the Capitol rotunda, using his death as a prop in order to ignite their constituents’ “summer of rage,” there were more than 50 murders (including several police officers) directly associated with almost 600 violent riots, which caused billions of dollars in damages.

At the same time, Democrat governors and mayors were actually ordering police to stand down as they actively supported those “peaceful protests.” Recall that Kamala Harris was promoting a “get out of jail free” bail fund for these riotous thugs. 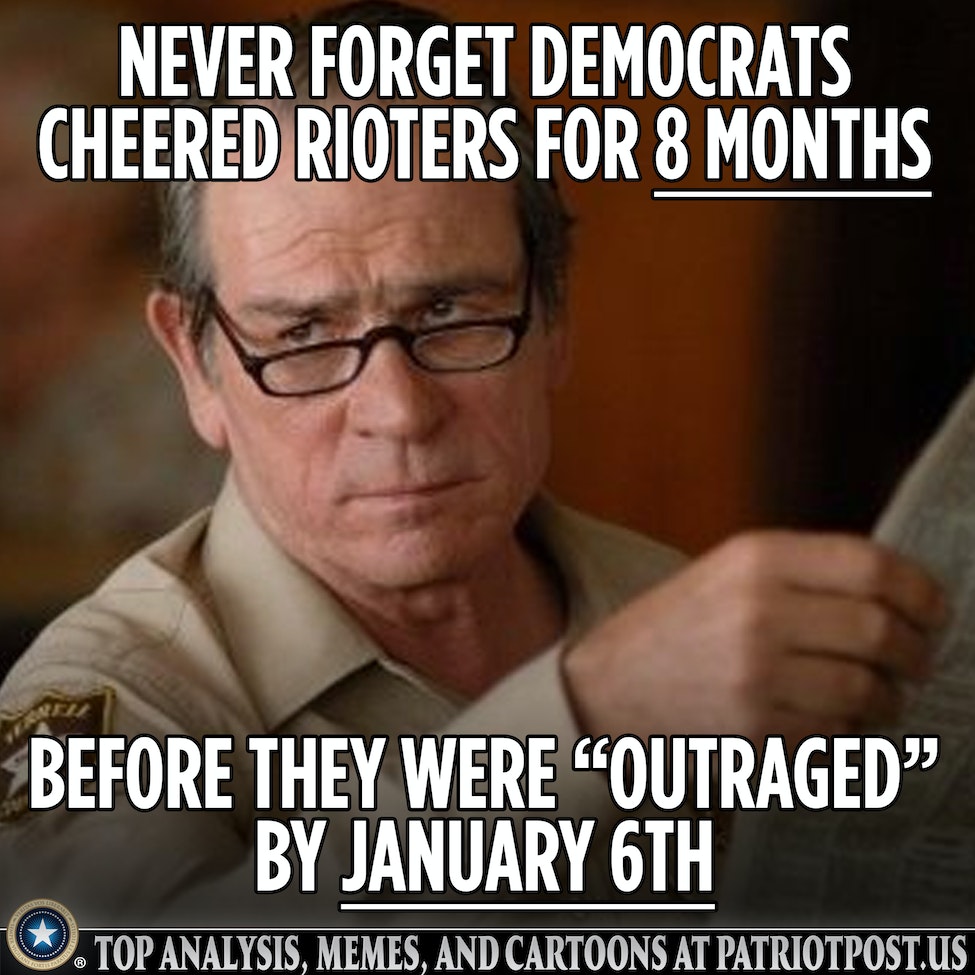 Fast-forward to this week, when one of those murderous BLM rioters in Minneapolis, Montez Terriel Lee, who torched a building and killed its occupant, was sentenced to just 10 years. Yes, it was felony murder, but it was for a “good cause.”

Sen. Minority Leader Mitch McConnell (R-KY) expressed outrage over the light sentence, declaring: “In the case of Mr. Lee, the acting U.S. attorney in Minnesota seems to have reached the bizarre conclusion that his radical political motives somehow excuse, rather than exacerbate, his wrongdoing.” That line of logic is precisely the line taken by Democrats regarding their constituent rioting — the burn, loot, and murder riots were justified.

Sen. Tom Cotton said likewise: “Justifying the murder because the career criminal shares the Biden administration’s politics is beyond the pale. The American people deserve to know whether leniency for left-wing murderers is the official policy of the Biden Department of Justice.”

Republicans are demanding that Attorney General Merrick Garland release all DoJ communications regarding this prosecution and sentencing.

At the same time Demos were fanning the “summer of rage” flames, they launched their deadly “defund the police” charade — painting a target on the backs of all law enforcement officers. The result was end of watch calls for 73 murdered cops in the deadliest year for police in two decades.

Now, the organization promoting much of that murder and mayhem, Black Lives Matter, is imploding. The corruption leading to BLM’s implosion was both fully noticed but fully unacknowledged by those Democrats who were its most fervent promoters and benefactors.

Indeed, as our political analyst Emmy Griffin noted, BLM’s board of Demo race hustlers is AWOL, along with tens of millions of dollars.

A Washington Examiner investigation into BLM’s “financial irregularities” found the organization “has had no known leader in charge of its $60 million bankroll since its co-founder resigned in May,” and that BLM has not reported required information regarding its 2020 finances — the year in which it loaded up its slush fund.

No longer able to avoid the obvious, California’s Justice Department threatened to prosecute the “charity” if it didn’t immediately cease and desist all fundraising. Likewise, Washington State issued an immediate “cease fundraising” order and BLM is out of compliance in seven other states.

After our exposé last year on BLM’s consummate hypocritical Marxist cofounder, one Patrisse Khan-Cullors (read: “Con-Cullors”), and her suspicious retirement at age 37 after purchasing $3.2 million worth of luxury residential property, nobody with an IQ greater than a paper clip is surprised by this implosion. Even the drunkest of BLM’s Kool-Aid drinkers could see this coming.

Incidentally, after the latest case of the leftist GoFundMe outfit shutting down a conservative page, this time the Canadian Freedom Convoy, claiming erroneously that the truckers were involved in altercations, I did a quick search and found many active GoFundMe pages still raising money for BLM.

Meanwhile, according to the legions of Demos who have backed BLM’s violence for the last two years: “Move on, nothing to see here, but look over there at the RNC endorsement of that J6 riot!”

Finally, defying all reason, I still know many leftist Demos who are so emotionally bonded with this race-hustling racket that they still embrace the hustle – emotionally blinded to reality. Of course, most of them are wealthy white suburban lefties so reality is not a familiar domain.