Apparently, the Twitter-heads have no sense of humor when it comes to gender confusion.

As most people reading this know, The Babylon Bee is a leading humor and satire publication, an outstanding “news” site with a lot of very funny content rooted in a conservative and Christian perspective. We promote the Bee’s articles often in our humor headlines section and have supported TBB for years.

The Bee’s editors are famous (or infamous in leftist circles) for targeting woke culture, but they found out the hard way this week that when it comes to the chronically gender confused, the Left has no sense of humor. The arbiters of truth at Twitter, who aggressively silence views that don’t comport with their leftist orthodoxy, have locked TBB’s Twitter page because of an offending post, and they insist the page will remain locked until the Bee’s publisher and editor, Seth Dillon and Kyle Mann, respectively, remove the post.

They are refusing to do so, and that has ensured the “offending” post has gotten far more views than it would have otherwise through other forums. But TBB’s 1.3 million Twitter followers are finding out that email subscriptions or visiting websites directly are the only ways to guarantee you can bypass Big Tech’s “redlining” of free speech.

I should note here that the world’s largest social media platform, Facebook, allows no restoration of standing if you offend one of the Left’s most-favored constituencies. After we dared state that there are only two genders, male and female, and insisted that men can’t get pregnant, Facebook suppressed our reach to a mere 10% of what it was 18 months ago — because, you know, we follow the science! In other words, the censors are not showing most of our 700,000 Facebook followers our content.

So what did Dillon and Mann post that was so offensive?

First, some background. Last week, I noted that, on the culture warfront of the gender devolution revolution, the absurd had collided with the surreal — again. One of the nation’s self-appointed arbiters of truth, USA Today, a leading Leftmedia propaganda organ for the socialist Democrat Party, announced its “Women of the Year.” Alongside the short list of actual women was Assistant Secretary of HHS Rachel Levine — yet another man who identifies as a woman. USA Today featured him among its list of “strong and resilient women who have been champions of change across the country, leading and inspiring as they promote and fight for equity, and give others a place to seek help and find hope.”

Clearly, the “fact-checkers” at USA Today need a reality check-in from their woke alternate universe.

In typical Bee fashion, Dillon and Mann posted an image declaring Levine as the Bee’s “Man of the Year.” Hilarious! Given that Rachel (formerly Richard) Levine was once married with two kids, I nominate him for the Bee’s “Father of the Year” come Father’s Day!

But Twitter dubiously claimed that the Bee had violated its “hateful conduct” rules, which state that “you may not promote violence against, threaten, or harass other people on the basis of race, ethnicity, national origin, sexual orientation, gender, gender identity, religious affiliation, age, disability, or serious disease.” 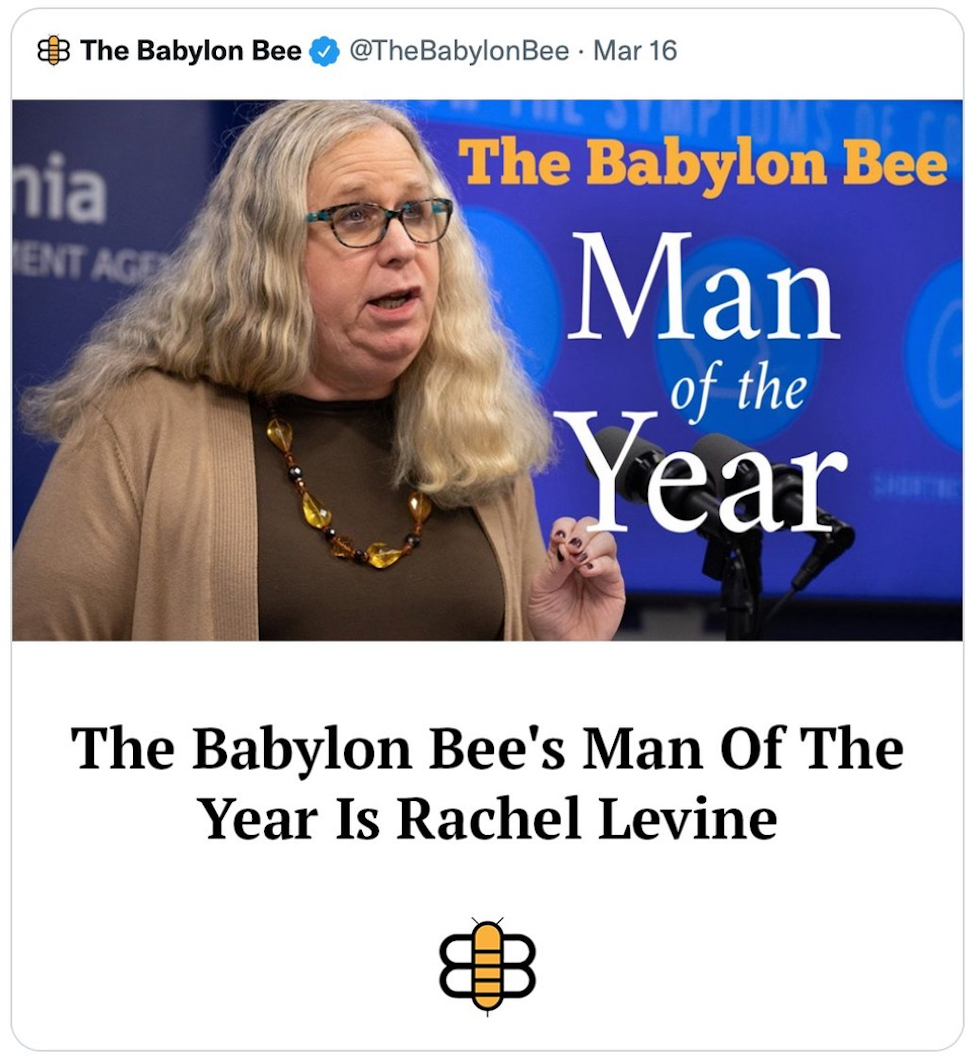 In a statement declaring that the Bee would not remove the post, publisher Seth Dillon said: “We’re not deleting anything. Truth is not hate speech. If the cost of telling the truth is the loss of our Twitter account, then so be it.”

For his part, TBB editor-in-chief Kyle Mann says: “It’s time to take a stand, and that time is now. If we wait any longer, we may no longer have that chance. We’ve been incredibly blessed at The Babylon Bee in that we have a healthy number of paying subscribers who help us keep the lights on, and we’re going to use that to stand firm here and do what’s right.”

Notably, Turning Point USA’s Charlie Kirk is also locked out of his Twitter account for calling Levine what he is, a man.

It is long past time for Congress to end Section 230 protections for social media platforms given their abject violations of the most basic of civil rights, free speech.

Fauci Cashed in on the Pandemic

Nord Stream Sabotage: Who Done It?

“Give up money, give up fame, give up science, give the earth itself and all it contains rather than do an immoral act.” —Thomas Jefferson (1785)