The Times v. the Tucker Factor

When you’re taking flak from The New York Times, you know you’re over the right target.

“These abuses of an [the press] so important to freedom and science are deeply to be regretted, inasmuch as they tend to lessen its usefulness and to sap its safety.” —Thomas Jefferson (1805)

Fox News host Tucker Carlson is in a place he loves to be — the target of leftists.

Generally, this means barbs from the talkingheads at CNN or MSNBC, but now it’s a more formidable adversary in the form of an excessively verbose New York Times attack series. Tucker knows, as do we all, that when the Times devotes this much manpower and bandwidth to criticizing a political opponent who it deems a threat to its leftist orthodoxy and agenda, that opponent is succeeding. It codifies the fact that the target of its ire is on the right side of what is good and right for America, the right side of history.

Why is the Times so panic-stricken?

Moreover, the top five cable programs were all on Fox News, with Tucker Carlson coming in second, just behind “The Five,” averaging a whopping 3.39 million viewers.

Poor CNN. It just opened and shut its laughingstock CNN+ streaming service. As our managing editor Nate Jackson noted: “Despite the wagon circling from other Leftmedia outlets … most Americans are well aware that they can’t trust CNN for straight news, and they won’t pay $5.99 a month to get more of it. Perhaps that’s why spending $300 million (not counting perhaps another $200 million in advertising) to create CNN’s streaming service lasted all of 24 days from launch to announcement of its cancellation. A gallon of milk might last longer.”

Things aren’t much better for paid circulation at The New York Times. According to Statista: “In 2021, the average weekday print circulation of The New York Times was approximately 343,000. This marks a significant drop from over 1.3 million a decade earlier and continues the downward trend.” For its part, the Times counters that it has about 5,500,000 news subscribers, all but about 800,000 of those being digital, but that covers all of its products and subsidiaries, including entertainment, games, and sports.

Apparently, the Times and CNN are competing with Joe Biden and his socialist Democrat Party in a race to the bottom.

As political observer Scott Johnson notes: “Tucker Carlson must be the most important populist conservative in the United States. I infer his importance from the three-part New York Times series on Tucker by Nicholas Confessore assisted by the usual cast of thousands. The Times has pulled out all the stops to make Tucker appear a repulsive character in the eyes of Times readers. They must be quite confident that Times readers have never seen his show.”

Of course, Times readers — what is left of them — have likely not seen his show, and if they had, they would probably be as repulsed as I am at the thought of sitting through any amount of MSNBC’s always smarmy Rachel Maddow, the highest-rated leftist on cable, whose ratings are suffering to the point that she will be discontinuing her nightly show for a weekly program. 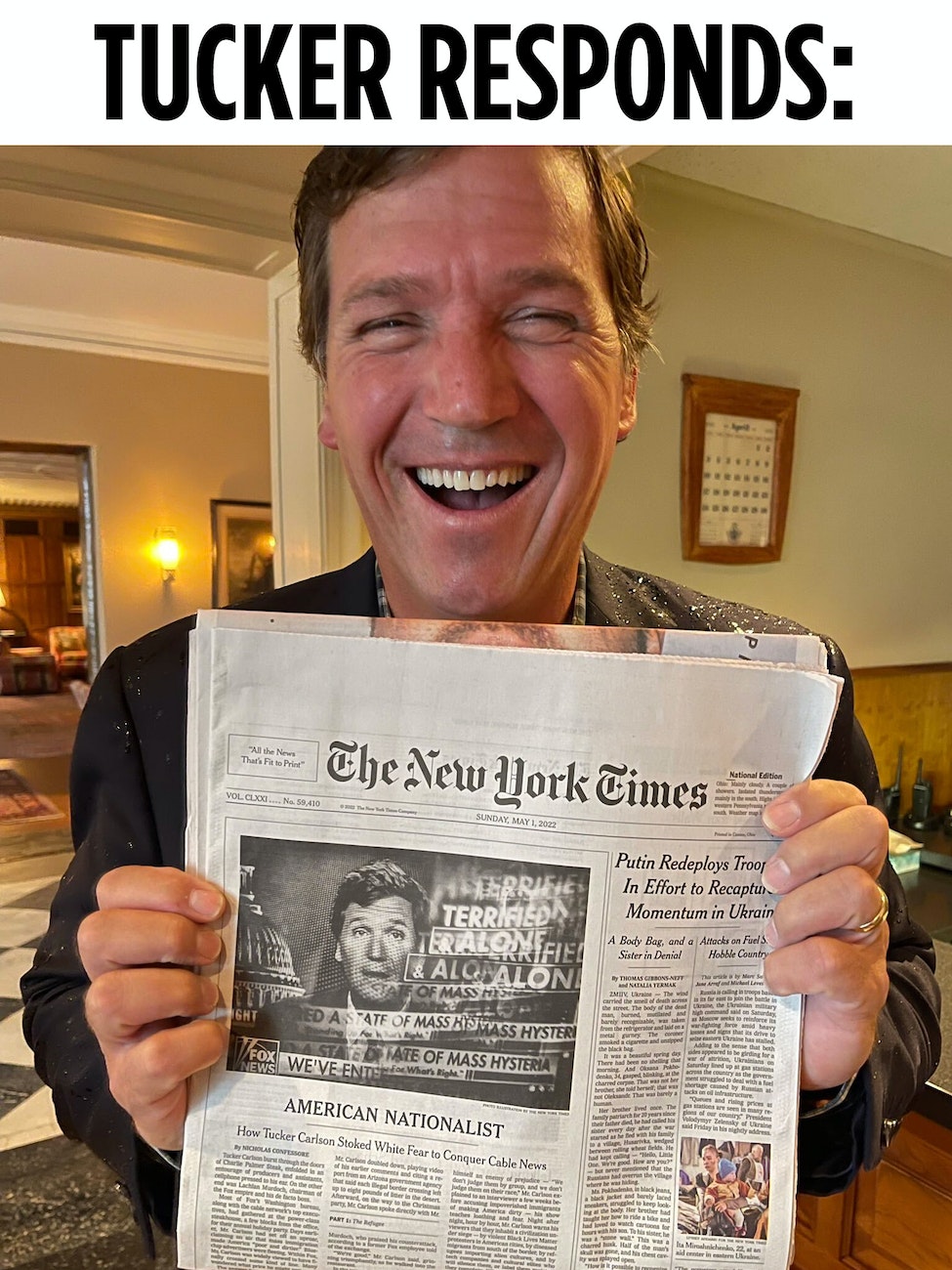 The leftist mainstream media lost a lot of ground after Joe Biden’s “victory” over Donald Trump, in large measure due to the Democrats’ so-called “voter rights” bulk-mail ballot fraud strategy, which they justified using the ChiCom Virus pandemic as cover.

Neither the Democrats nor their leftist mainstream media outlets have much to offer their constituents other than the hit list of what they’re against — primarily anything that favors American Liberty, individual rights, and responsibilities above the Left’s collective statist agenda. They need a whipping boy — which is why in a few months they’ll be making Donald Trump and Nancy Pelosi’s J6 investigation charade a centerpiece of their midterm election strategy.

And that strategy will enjoy the full and unconditional cooperation of their Leftmedia propagandists and Big Tech speech suppressors, with the possible exception of Twitter under Elon Musk management. For that reason, nobody but NOBODY should assume all the glowing predictions of big GOP gains in the midterms are inevitable, especially given the most recent Biden bounce.

So what’s the big deal about just more than 1% of the American people tuning into Tucker Carlson every night? Well, those Americans are among the most vocal grassroots conservative activists and influencers.

I have registered objections to Carlson’s rhetorical style — things that I think he should moderate in order to retain some modicum of integrity and thus, better inform his constituency. His penchant for invoking unsubstantiated hyperbolic absolutism – drawing conclusions that are detached from reality, puts him at risk of becoming the proverbial “boy who cried wolf,” no longer believable. Indeed many of Carlson’s sensationalist topics are what I classify as “10% substance and 90% fragrance.” And his promotion of conspiracy theories and cultish delusion and obsession with UFOs certainly undermines his credibility.

I also have concerns about creating celebrity conservatives icons who are, well, human, and thus subject to human foibles and failures. In 2017, Carlson stepped into the time slot vacated by Bill O'Reilly, who for 16 years had hosted “The O'Reilly Factor,” the highest-rated cable news show on Fox — until The New York Times took him down.

Of course, idols at the other networks have fallen, too — including MSNBC’s top-performing Chris Matthews and, more recently, CNN President Jeff Zucker and the network’s top talkinghead, Chris Cuomo — you know, the other Cuomo.

It’s no small irony that Tucker Carlson frequently and sarcastically employs the Left’s favorite tag for takedowns, claiming that those who oppose the Left are “RACIST!” Because that’s precisely what the Times is attempting to do to Carlson.

Nick Confessore, the NYT’s principal hack authoring the Carlson hit job, entitled his series, “American Nationalist,” which he claims is an investigation into “Tucker Carlson and the transformation of American conservatism.” He launched the series with a 9,000-word screed entitled “How Tucker Carlson Stoked White Fear to Conquer Cable.” It is a play on Biden’s bogus “white supremacy” bogeyman.

However, the problem in America isn’t “nationalism.” It’s the dramatic socialist political shift to the left. To that end, Elon Musk set the Twittersphere ablaze with a brilliant image about that political shift, demonstrating what Ronald Reagan once said of his political alignment: “I did not leave the Democrat Party. The Democrat Party left me.” 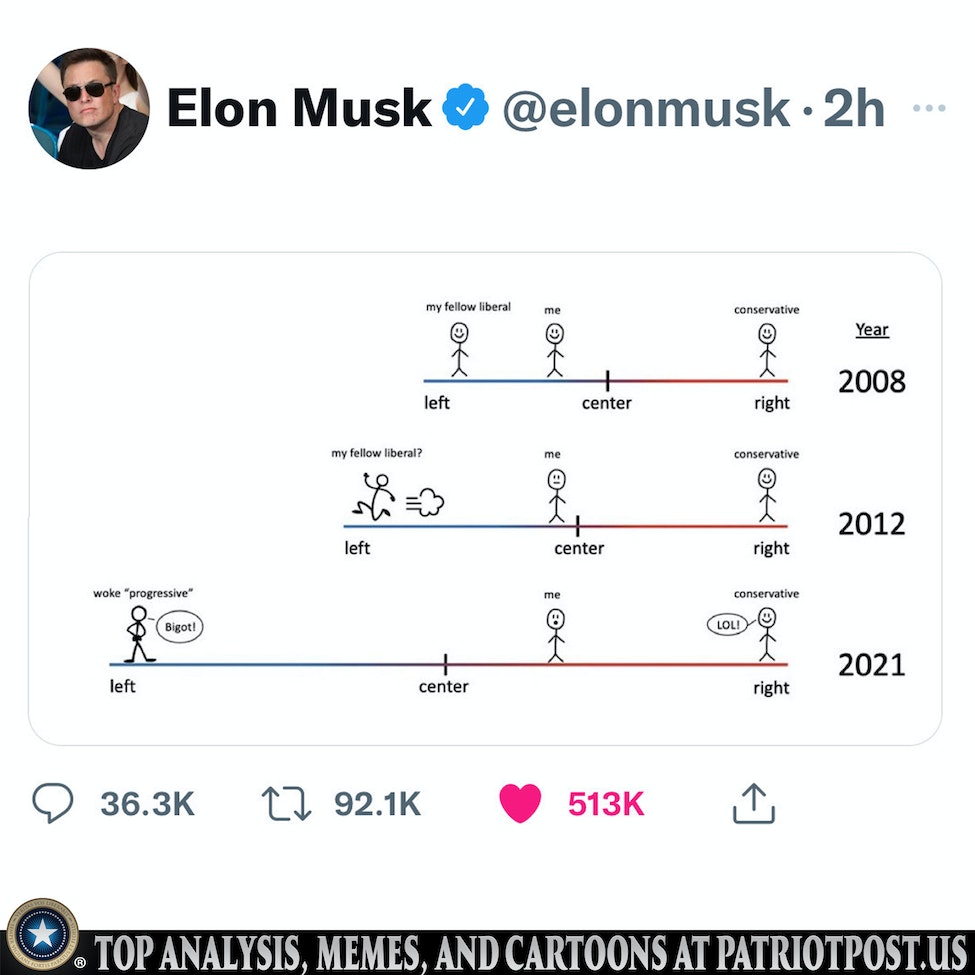 Of course, the Times, like the racist Democrat Party, spends most of its waking hours perfecting its hate-hustling message.

Contrary to the vision of Martin Luther King and other critics of race-bait agitators, the Left wants to ensure that all we see is race — “the color of their skin” rather than “the content of their character.” They have thus staked their political fortunes on promoting division and hate.

As for Carlson, he says he is ignoring the now-epic 20,000-word series, though I think he may have some fun with it this week.

Finally, since most of our staff have young families at home, the duty of checking on the nightly cable news falls primarily to the old guy on the team — me.

I am grateful for the ability to DVR my way through recorded episodes of Bret Baier and Carlson each night, eliminating the advertising and the redundant news cycle topics — the consequences of Biden’s open-border policy, the Russian attack on Ukraine, and the never-ending election cycles.

Fact is, Baier has the best news hour on the market despite the daily challenge of filling that hour with new and relevant news — which is why Walter Cronkite only needed a half hour each night.

Baier’s panel discussions are generally very good, as are Carlson’s populist topics and grassroots personalities. I recommend both — albeit with DVR controller in hand!

Planned Parenthood Looks to Cash In

“The government of the United States is a definite government, confined to specified objects. It is not like the state governments, whose powers are more general. Charity is no part of the legislative duty of the government.” —James Madison (1794)