Why Racists Are Backing Biden

Democrats have done more to oppress black Americans than the KKK and other racist groups could ever hope to do.

“There is in human nature a resentment of injury, and indignation against wrong, a love of truth and a veneration of virtue … if the people are capable of understanding, seeing and feeling the differences between true and false, right and wrong, virtue and vice…” —John Adams (1775)

To propagate that false racist narrative, Joe Biden has repeatedly insisted that Donald Trump is racist. And he has used, as the foundation of that assertion, the LIE that President Trump praised white supremacists after the 2017 Charlottesville conflict.

Ahead of the first presidential debate, Biden trotted out this sensational fabrication again on CNN: “Have you ever heard this president say one negative thing about white supremacists? Have you ever heard it? That’s the reason I got back in this race — because of what happened in Charlottesville. … People coming out of the woods carrying torches, their veins bulging. Close your eyes and remember what you saw. And a young woman gets killed, resisting the hate and violence? And the president gets asked to comment on it. What’s he say? He says there are very fine people on both sides. … Seventy-some percent of the American people [are] saying there is systemic racism. … All this administration does is keep pouring gasoline on the fire. … It’s all about division.”

Biden has been fact-checked as false on this and other racist accusations, even by the Leftmedia. In fact, in his interview about Charlottesville at the time, President Trump was VERY clear in his condemnation of white supremacist groups — and has condemned haters for years. But CNN’s Anderson Cooper failed to challenge Biden’s most recent lie about this.

So, are we to conclude that Biden “got back in this race” on the basis of a completely false pretext? That would fit. Or is it just another weird expression of Biden’s fantasy world?

Likewise, Biden asserted this “very fine people” lie again in the last presidential debate, and likewise, it went unchallenged. Maybe it was just another non compos mentis moment and he forgot this was an abject lie. He may trot it out again at the final debate on Thursday — and it might remain unchallenged — which would be a big mistake for President Trump.

In Trump’s town hall last Thursday night, NBC “moderator” Savannah Guthrie repeated the “racist” narrative by asking Trump, once again, to denounce white supremacy, claiming, “It feels sometimes you’re hesitant to do so.” Of course, that was more Beltway media balderdash. Real journalists don’t use first-person “it feels like” language, but media hacks with an agenda do.

What Guthrie, and nobody else is asking Biden to do, is recant his praise for anti-Semites.

So, what’s the truth about Biden and the Democrat Party’s record on race?

To answer that question, consider that Biden has not been asked about his support for, and from, many black supremacists, especially from the Marxist so-called “Black Lives Matter” radicals.

Moreover, consider the colossal irony of Biden’s repeated Charlottesville lie: that the white supremacist at the center of those riots, Richard Spencer, has endorsed … wait for it … Joe Biden. That’s right, JOE BIDEN.

Why would Spencer endorse Biden? “I plan to vote for Biden and a straight democratic ticket,” he claims. “It’s not based on ‘accelerationism’ or anything like that; the liberals are clearly more competent people.” “Accelerationism” is the advancement of leftists and their policies in order to foment chaos, which haters hope will result in a white supremacist revolution.

While I think that “accelerationism” actually is one reason Spencer has endorsed Biden, here’s the primary reason behind that endorsement: The socialist Democrat Party and its race hustlers have, for generations, done more to oppress black Americans than the KKK and other racist groups could ever hope to do. And for the last two decades, Democrats have, likewise, oppressed Hispanic Americans.

Thus, Spencer’s endorsement is, by extension, a call for all racists to back Biden, because he knows Biden and the Democrat Party will continue the institutionalization of systemic white supremacy — however unintentionally. He has two assurances of that continuation.

First, the Demos’ Orwellian so-called “Great Society” programs have been a colossal failure, and in combination with other leftist policies since, have perpetually enslaved poor black Americans on urban poverty plantations for generations.

As Stanford University’s Thomas Sowell observed: “Many successful political careers have been built on giving blacks ‘favors’ that look good on the surface but do lasting damage in the long run. One of these ‘favors’ was the welfare state. A vastly expanded welfare state in the 1960s destroyed the black family, which had survived centuries of slavery and generations of racial oppression.” 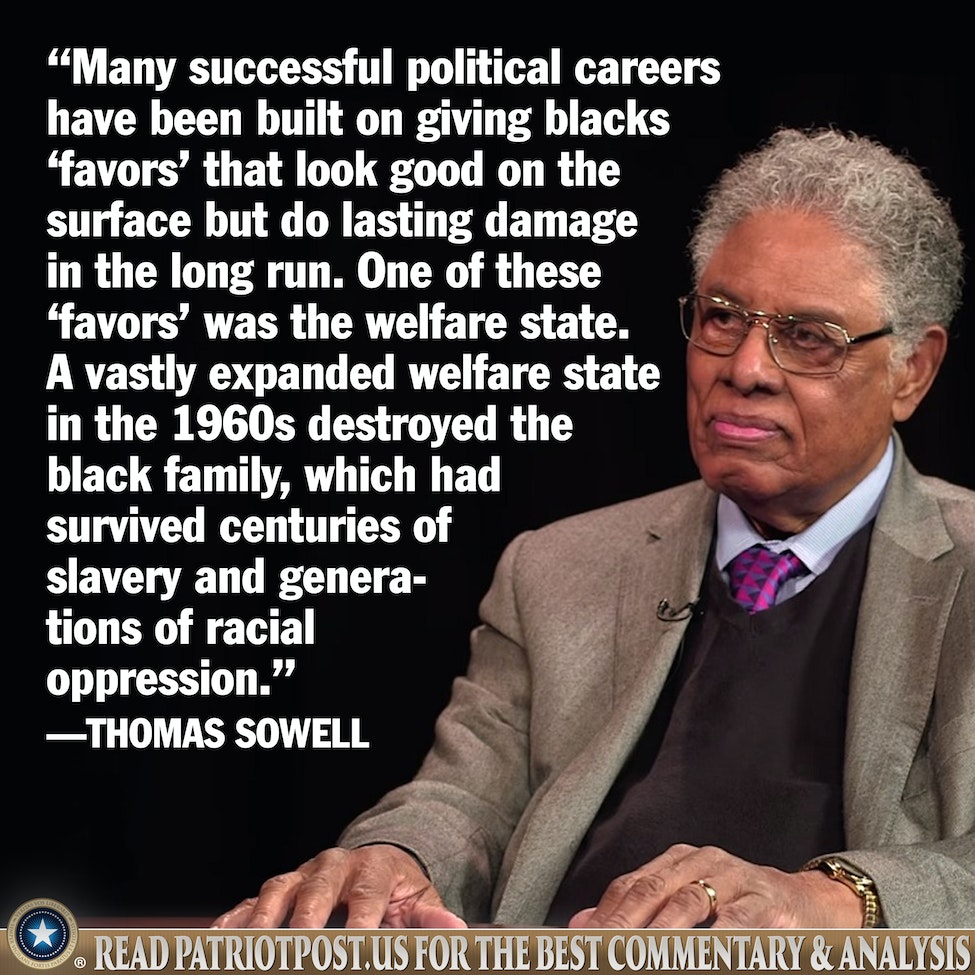 This systemic subjugation of black people has been perpetuated by “race-problem solvers” for a century.

In his 1911 book, My Larger Education, a former slave who rose to become the most influential black intellectual of the 19th century, Booker T. Washington, wrote: “There is a certain class of race-problem solvers who do not want the patient to get well, because as long as the disease holds out they have not only an easy means of making a living, but also an easy medium through which to make themselves prominent before the public.”

And Democrat policies, like the deadly Biden-Harris war on cops, have the most egregious detrimental impact on poor black and Hispanic communities, where there is a pandemic of black-on-black crime.

Second, and of much greater significance to the cause of white supremacy, is the Democrats’ advocacy for killing black children before birth. This is, without a doubt, their most insidious black population-control measure, and it was originally envisioned by Planned Parenthood founder and feminist icon Margaret Sanger.

According to Sanger: “We do not want word to go out that we want to exterminate the Negro population, if it ever occurs to any of their more rebellious members.”

Well, the Democrats have hidden these truths from their black constituents, which has helped ensure their compliance as the party’s most loyal voter constituency. But the racists can do the math.

Though black women represent 14% of the childbearing population, they account for 38% of all abortions. Since Democrats legalized abortion on demand in 1973, an estimated 20 million black babies — more than the entire black population of 1960 — have been sacrificed on that barbaric genocidal altar.

In a letter to Planned Parenthood on “the systemic racism of America’s abortion practices,” more than 120 prominent black leaders note that it’s no coincidence that “79% of Planned Parenthood’s surgical abortion facilities are located in or near communities of color.”

Bottom line: The Democrat Party is the most enduring monument to racism in America. It was and remains the Party of Hate, and a vote for Biden and Kamala Harris is a vote for systemic white supremacy.

Fellow Patriots, never in my lifetime has American Liberty been in more peril than right now. This is the most challenging quadrennial election I’ve ever witnessed, but our mission to advance Liberty is timeless — and not tied to any political cycle or candidate.