ChiCom Joe and the Appeasers

The “Big Guy” bows to our Red Chinese adversaries.

That was evident last week with Biden’s declaration, “We’re prepared to reengage in negotiations with the P5+1 on Iran’s nuclear program.” That is a reference to the disastrous Iran “nuke deal” cut by Obama’s secretaries of state, John Kerry and Hillary Clinton.

And there is additional evidence that Kerry and Biden’s current special envoy on Iran policy, Robert Malley, were “negotiating” with Iran, undermining the Trump administration’s policies. On that, Mark Dubowitz, head of the Foundation for Defense of Democracies think tank, observed, “It is not good practice for senior officials who served at the highest levels of a former administration, Democratic or Republican, to be trying to undermine the policy of a sitting administration by engaging actively with a known enemy of the United States.”

Of course, Kerry has a sordid history of providing “aid and comfort” to our enemies, starting with his 1970 meetings with NVA Communists in Paris — in direct violation of the UCMJ’s Article 104 part 904 and U.S. Code 18 U.S.C. 953 — while Nixon administration officials were negotiating a peace settlement with the NVA. He should have been prosecuted for that unlawful conduct.

The consequences of Biden’s current appeasement with Iran are dire. Recall that Obama’s appeasement gave rise to the Islamic State, which led to a humanitarian crisis of historic proportions. Get ready for more of the same.

That notwithstanding, of much greater significance to our national security, Biden’s appeasement model with Iran forebodes a far more dangerous reversal of policies — those with the Red Chinese communists.

Biden’s first kowtow and bow to China’s dictator, Xi Jinping, was his executive order to reverse Trump’s withdrawal from the World Health Organization, a corrupt ChiCom puppet organization. China was complicit with the WHO in its cover-up of the origins of the catastrophic China Virus, which, as Biden noted this week, now accounts for more than 500,000 American fatalities.

Furthermore, at the recent G-7 summit, Biden announced that the U.S. has officially reentered the dubious Paris climate agreement, ostensibly to retard “climate change.” According to Biden: “We can no longer delay or do the bare minimum to address climate change. This is a global existential crisis. As of today, the United States is officially once again party to the Paris Agreement, which we helped put together.”

It took the Trump administration almost four years to extricate the U.S. from this bogus agreement, but it took Biden mere weeks to fully reenter it. The biggest beneficiary of this boondoggle: China.

Trump was the first president in decades to actually take on China — both the unfair trade issues and the national security threat posed by the ChiComs. Biden’s appeasement model is the perennial Beltway political and Foggy Bottom foreign policy model, so it’s no surprise that Biden, approaching his sixth decade as a swamp creature, would be reverting to that posture with China.

It has been argued by some political analysts that the “Big Guy’s” corrupt influence-peddling scheme with the ChiComs, arranged by Hunter Biden and subsequently subject to a massive media blackout just ahead of the presidential election, is indicative of Biden’s being beholden to the ChiComs. Thus, his appeasement.

To be sure, there is a double standard regarding the Democrat Party’s fake “Russia collusion” narrative in support of their attempted deep-state coup to take Trump down, and the subsequent impeachment charade with the same objective. The Demos endeavored to convict Trump for what Biden actually did in Ukraine.

However, I think it is actually indicative of Biden’s indifference to — and consequently appeasement of — the global military and economic threat China poses to the United States. Obama bowed to Chinese dictator Hu Jintao, but Biden is kissing Xi Jinping’s ring.

No question that the real winner of the last presidential election is its greatest beneficiary, the Red Chinese government — the most perilous threat to the United States.

In Biden’s bumbling recollection of that recent phone call with Xi, he explained: “Chinese leaders — if you know anything about Chinese history — the time when China has been victimized by the outside world is when they haven’t been unified at home. Vastly overstated. The central principle of Xi Jinping is that there must be a united, tightly controlled China — and he uses his rationale for the things he does based on that.”

Biden continued: “I point out to him no American president can be sustained as a president if he doesn’t reflect the values of the United States. And so the idea I’m not going to speak out against what he’s doing in Hong Kong, what he’s doing with the Uyghurs in the western mountains of China and Taiwan, trying to end the One China policy by making it forceful, I said [unintelligible gibberish] he gets it. Culturally there are different norms that each country and their leaders [sic] are expected to follow.”

Political analyst Scott Johnson, who kindly refers to Biden as “the gentleman from Madame Tussauds,” noted, “This [is] an incredibly rich text illustrating Biden’s ‘thought’ … the cultural relativism that lies at the core of Democratic orthodoxy. China has their thing and we have ours. Their thing involves tyranny and abuse of human rights. Our thing involves the condemnation of same.”

Actually, I think that Madame Tussauds’ wax figures are more lucid than Biden.

Biden and his president-in-waiting, Kamala Harris, have an outstanding model for how to deal with China — the model established by the Trump administration under the foreign policy leadership of former Secretary of State Mike Pompeo.

As National Review’s Dan McLaughlin notes: “On Joe Biden’s first day in office, the People’s Republic of China decided to settle scores individually with people who worked in the Trump administration by announcing that 28 members of the outgoing administration would be personally sanctioned for ‘crazy moves which have gravely interfered in China’s internal affairs,’ primarily meaning that the Trump administration called out ongoing Chinese Communist Party human-rights abuses such as genocide, concentration camps, and slavery.”

That is tantamount to an endorsement of the policies crafted and advocated by each of those Trump administration officials, but not the policies of the appeasers. 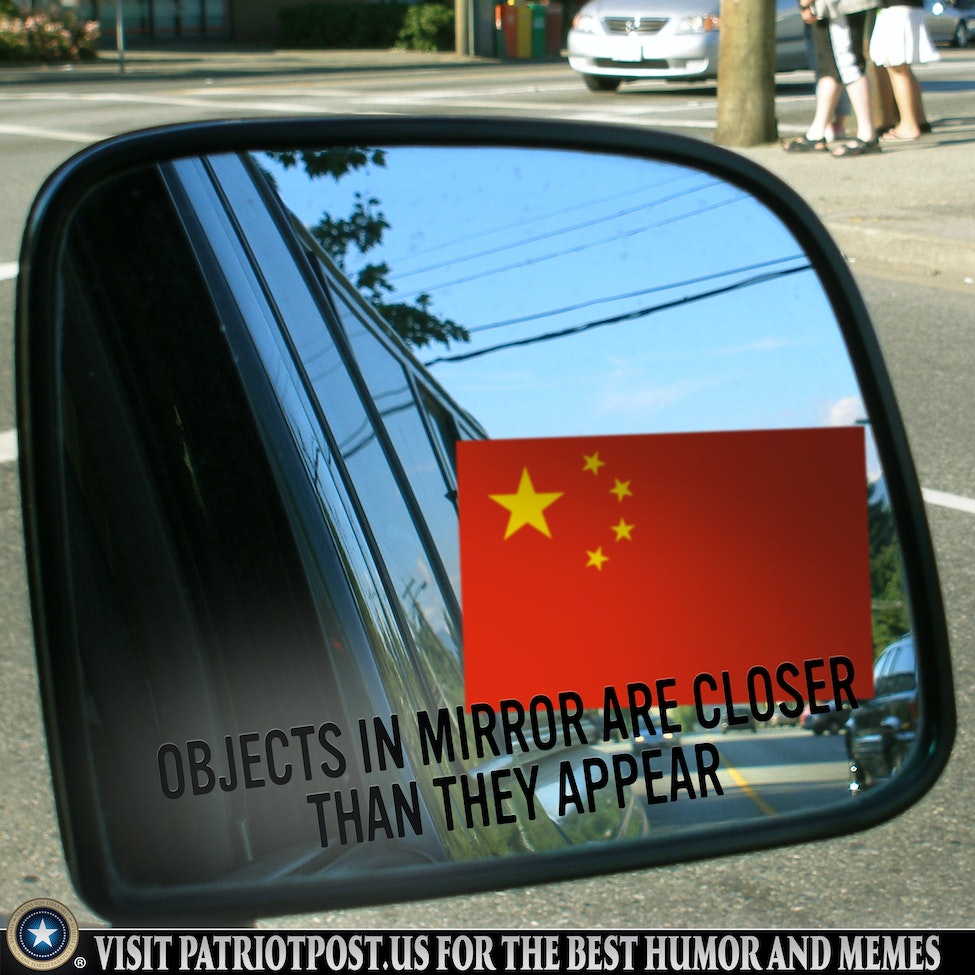 Former Defense Secretary and CIA Director Robert Gates famously wrote that Joe Biden “has been wrong on nearly every major foreign policy and national security issue over the past four decades.” If the early days of his presidency are any indication, Biden will continue the trend in spades.

As Mike Pompeo warned just before the Biden/Harris regime took office, the ChiComs are “inside the gates.”