The Biden-Harris Assault on the Second Amendment

Biden-Harris, if they succeed, will be the most anti-2A administration in history.

“The ultimate authority … resides in the people alone. … The advantage of being armed, which the Americans possess over the people of almost every other nation … forms a barrier against the enterprises of ambition, more insurmountable than any…” —James Madison (1788)

If Joe Biden and his presidential designee Kamala Harris defeat President Donald Trump in November, the conventional wisdom predicts that the urban violence they have fomented for months will subside. Conventional wisdom may be wrong this time around, though. If Biden wins, urban centers could erupt with a level of violence far exceeding anything socialist Democrats seeded this summer.

According to Rep. Ayanna Pressley (D-MA), one of the uber-leftist “Gang of Four” Squad members leading the socialist surge in the House, “There needs to be unrest in the streets for as long as there is unrest in our lives.”

The catastrophic crime surge resulting from the Democrat “defund the police” agenda has left millions of Americans with only one means of defense: self-defense. And that is the final line of defense to which all Americans are both entitled and obligated in order to sustain American Liberty.

On that note, Biden has promised to be “the most progressive [read: regressive] president in history.” In other words, his handlers and heir apparent, Harris, if they succeed, will be the most anti-2A administration in history. Harris has already demonstrated her plans to ban so-called “assault rifles” and “high-capacity” magazines — though the latter hit a legal roadblock in federal court last week. 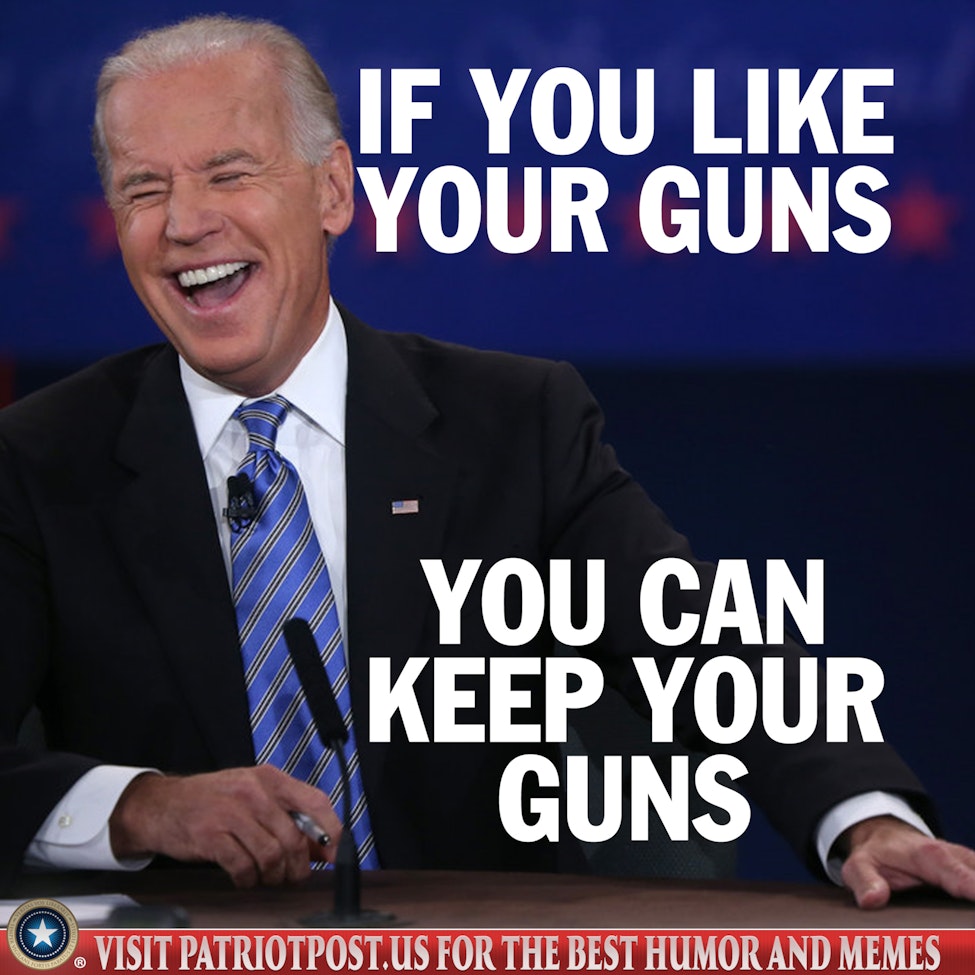 Harris supports gun confiscation by way of “mandatory buybacks,” a distinction without a difference. She insists, “We’re going to have to have smart public policy that’s about taking those off the streets.”

Making Harris’s objectives clear, National Shooting Sports Foundation spokesman Mark Oliva notes, “During her short-lived presidential campaign, she demanded gun-control legislation within 100 days and threatened executive action if Congress didn’t deliver.” He added: “Harris was clear when she said gun control would be an administration priority. Her platform included entertaining forced confiscation of lawfully owned semiautomatic rifles, redefining ‘sporting purpose’ for lawful firearm possession, criminalizing private firearm transfers and repealing the Protection of Lawful Commerce in Arms Act. In fact, she supports politicizing the Department of Justice and using the weight of the federal government to harass a constitutionally protected industry in a series of frivolous lawsuits to bankrupt manufacturers. Biden’s selection of Senator Kamala Harris as his running mate makes this ticket the most serious threat to American Second Amendment rights ever faced in a presidential election.”

Kris Brown, president of the Brady United gun-control group, says that Harris is “a game changer.” She affirmed: “By choosing Harris, Biden takes a bold stance. He proves he understands a fundamental problem our country is facing: gun violence. And with two gun violence prevention champions on the ticket, we can finally overcome the NRA, Donald Trump, and Mitch McConnell.”

Actually, as I’ve documented many times before, violence is a culture problem, not a “gun problem.” But Biden and Harris are beholden to the far Left, and I predict they will set about to deconstruct and repeal the Second Amendment.

The Second Amendment, of course, is the First Civil Right of all law-abiding Americans. As Justice Joseph Story, appointed to the Supreme Court by James Madison, wrote in his definitive Commentaries on the Constitution of the United States (1833): “The right of the citizens to keep and bear arms has justly been considered, as the palladium of the liberties of the republic; since it offers a strong moral check against usurpation and arbitrary power of the rulers; and will generally, even if these are successful in the first instance, enable the people to resist and triumph over them.”

To define the difference between Republicans and Democrats regarding the Second Amendment, consider the following.

The 2020 Democratic Party Platform declares total war on Second Amendment rights, the likes of which have never before found their way into the party’s policy platform.

It notes: “Democrats will ban the manufacture and sale of assault weapons and high capacity magazines. We will incentivize states to enact licensing requirements for owning firearms and ‘red flag’ laws that allow courts to temporarily remove guns from the possession of those who are a danger to themselves or others. We will pass legislation requiring that guns be safely stored in homes. And Democrats believe that gun companies should be held responsible for their products, just like any other business, and will prioritize repealing the law that shields gun manufacturers from civil liability.”

The ban on semiautomatic firearms and magazines was explicitly prohibited by the U.S. Supreme Court’s 2008 Second Amendment decision in District of Columbia v. Heller.

In 2015, Justice Antonin Scalia reiterated the Heller finding that the Second Amendment prohibits so-called “assault weapon” bans when he signed onto a dissent from the denial of certiorari in Friedman v. Highland Park. In that dissent, Justice Clarence Thomas explained: “Roughly five million Americans own AR-style semiautomatic rifles. The overwhelming majority of citizens who own and use such rifles do so for lawful purposes, including self-defense and target shooting. Under our precedents, that is all that is needed for citizens to have a right under the Second Amendment to keep such weapons.”

For the record, the number of 5.56mm semi-auto rifles is now estimated to be between 10 and 15 million, and every American Patriot I know, and 70 million I don’t know, are gun owners.

Notably, with the rise of Biden as the Democrats’ presumptive (and now official) nominee, between March and May of this year there have been more than 2.5 million first-time gun buyers in the U.S., more than 40% of whom are women. And after the Demos launched riots across the nation, gun sales surged in July, with more than 1,795,602 recorded transactions. And if you’ve tried and failed to purchase ammunition in the last three months, it’s because distributors have sold out before much of it reaches a retail shelf. 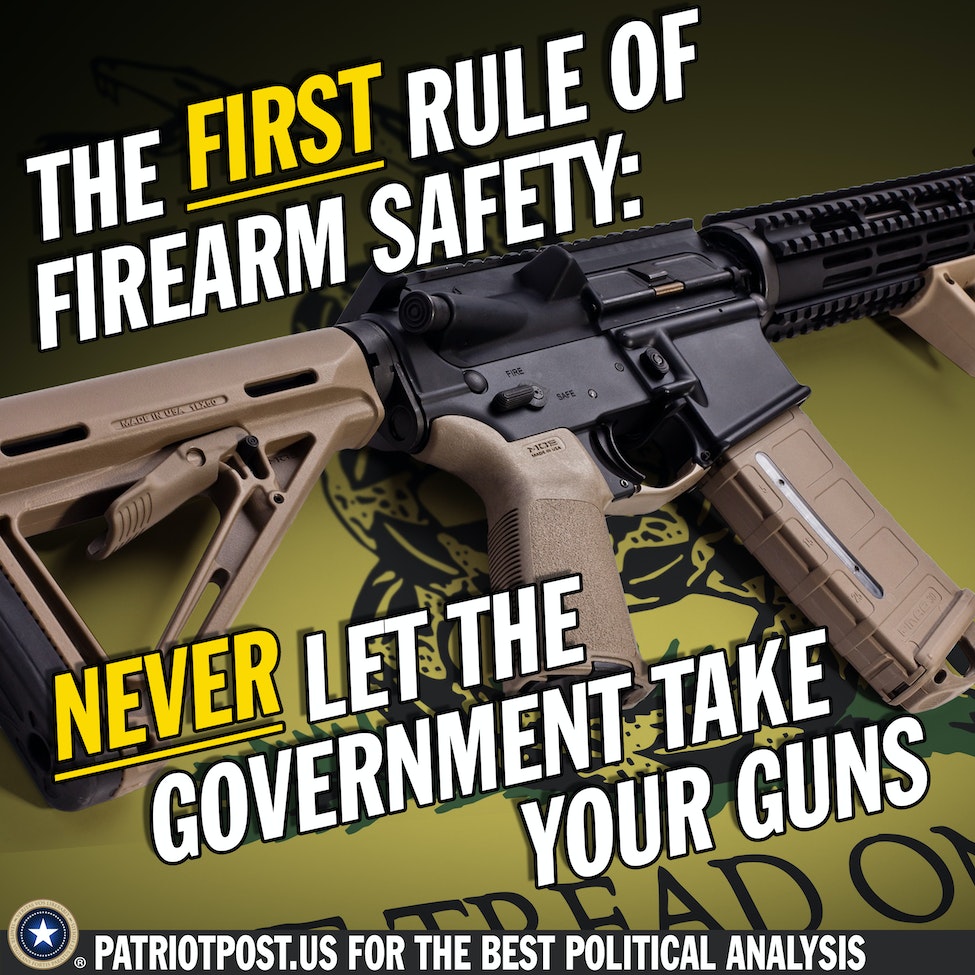 In stark contrast to the Biden-Harris socialist Democrat platform is the Republican platform, which was adopted from President Trump’s 2016 nomination convention. It states:

The Second Amendment: Our Right to Keep and Bear Arms.

We uphold the right of individuals to keep and bear arms, a natural inalienable right that predates the Constitution and is secured by the Second Amendment. Lawful gun ownership enables Americans to exercise their God-given right of self- defense for the safety of their homes, their loved ones, and their communities.

We salute the Republican Congress for defending the right to keep and bear arms by preventing the President from installing a new liberal majority on the Supreme Court. The confirmation to the Court of additional anti-gun justices would eviscerate the Second Amendment’s fundamental protections. Already, local officials in the nation’s capital and elsewhere are defying the Court’s decisions upholding an individual right to bear arms as affirmed by the Supreme Court in Heller and McDonald. We support firearm reciprocity legislation to recognize the right of law-abiding Americans to carry firearms to protect themselves and their families in all 50 states. We support constitutional carry statutes and salute the states that have passed them. We oppose ill-conceived laws that would restrict magazine capacity or ban the sale of the most popular and common modern rifle. We also oppose any effort to deprive individuals of their right to keep and bear arms without due process of law.

We condemn frivolous lawsuits against gun manufacturers and the current Administration’s illegal harassment of firearm dealers. We oppose federal licensing or registration of law-abiding gun owners, registration of ammunition, and restoration of the ill-fated Clinton gun ban. We call for a thorough investigation — by a new Republican administration — of the deadly “Fast and Furious” operation perpetrated by Department of Justice officials who approved and allowed illegal sales of guns to known violent criminals.

The anti-2A forces aligned against a second Trump term are formidable. The archenemies of Liberty, particularly billionaire socialists George Soros and Michael Bloomberg, are pouring tens of millions of dollars into key swing states.

Soros says the China Virus pandemic provided a “revolutionary moment,” and we all know that leftists never let a good crisis go to waste. According to Soros: “I would describe it as a revolutionary moment when the range of possibilities is much greater than in normal times. What is inconceivable in normal times becomes not only possible but actually happens. People are disoriented and scared.”

That’s the Democrat mantra, as stated most succinctly by Barack Obama’s former Chief of Staff Rahm Emanuel: “You don’t ever want a good crisis to go to waste; it’s an opportunity to do things you think you could not do before.”

It will be a pitched battle to defend the Second Amendment under a Biden-Harris regime, as Democrats long ago betrayed their solemn oaths “to support and defend” our Constitution and the Rule of Law. And if American Patriots don’t get their ground game together now, that will be the battle we face.