We are on a kinetic-warfare collision course with China.

U.S. Director of National Intelligence John Ratcliffe has issued a dire warning for our nation and the future of American Liberty. And there is nothing hyperbolic about that warning.

Beyond the devastation of the China virus, Ratcliffe outlined a Red China threat assessment I first heard in national security briefings dating back to the Clinton years. As our nation’s Cold War with the tyranny and terror of the failed Soviet communist regime waned, a new and equally ominous threat availed itself.

Unlike the threat posed by Russia, however, which has countless nuclear weapons but a total economy smaller than that of Texas, the ChiCom threat is predominately economic — for the moment. Our national security and military planners have been ramping up our defenses against the ChiComs for decades, but the threat now is much better defined and much more formidable. And it’s closing in.

Notably, that threat has been contained and in some instances set back by the economic gauntlet established by President Donald Trump. The administration’s policies have hit Xi Jinping’s communist regime, and that of his North Korean puppet dictator Kim Jong-un, hard.

But the threat remains imminent.

According to DNI Ratcliffe: “The intelligence is clear: Beijing intends to dominate the U.S. and the rest of the planet economically, militarily and technologically. Many of China’s major public initiatives and prominent companies offer only a layer of camouflage to the activities of the Chinese Communist Party. I call its approach of economic espionage ‘rob, replicate and replace.’ China robs U.S. companies of their intellectual property, replicates the technology, and then replaces the U.S. firms in the global marketplace.”

Ratcliffe continued, “China also steals sensitive U.S. defense technology to fuel President Xi Jinping’s aggressive plan to make China the world’s foremost military power. U.S. intelligence shows that China has even conducted human testing on members of the People’s Liberation Army in hope of developing soldiers with biologically enhanced capabilities. There are no ethical boundaries to Beijing’s pursuit of power. … The FBI frequently arrests Chinese nationals for stealing research-and-development secrets. … The U.S. government estimates that China’s intellectual-property theft costs America as much as $500 billion a year, or between $4,000 and $6,000 per U.S. household.”

Furthermore, as the DNI advised Congress, “This year China engaged in a massive influence campaign that included targeting several dozen members of Congress and congressional aides.”

Indeed, just this week, details emerged of a sordid ChiCom affair between Demo House Intelligence Committee member Eric Swalwell and a Chinese honey-trap, Fang Fang. And, as we noted earlier this week, more than 1,000 ChiCom “researchers” have fled the U.S. since the FBI arrested a handful of Chinese spies last summer.

“Within intelligence agencies,” Ratcliffe noted, “a healthy debate and shift in thinking is already under way. For the talented intelligence analysts and operators who came up during the Cold War, the Soviet Union and Russia have always been the focus. For others who rose through the ranks at the turn of this century, counterterrorism has been top of mind. But today we must look with clear eyes at the facts in front of us, which make plain that China should be America’s primary national security focus going forward.”

The DNI concluded: “Beijing is preparing for an open-ended period of confrontation with the U.S. Washington should also be prepared. Leaders must work across partisan divides to understand the threat, speak about it openly, and take action to address it. This is our once-in-a-generation challenge. Americans have always risen to the moment, from defeating the scourge of fascism to bringing down the Iron Curtain. This generation will be judged by its response to China’s effort to reshape the world in its own image and replace America as the dominant superpower. The intelligence is clear. Our response must be as well.”

Recent scripted assertions from dean Di Dongsheng with the ChiCom School of International Relations at Renmin University, make clear that Red China has already established high-level influencers in our government: “Why, between 1992 and 2016, did China and the U.S. have the ability to settle all kinds of issues? No matter what kind of crises we encountered… It’s just because we have people at the top. At the top of America’s core inner circle of power and influence, we have our old friends… Since the 1970s, Wall Street had a very strong influence on the domestic and foreign affairs of the United States, so we had a channel to rely on. But the problem is that after 2008, the status of Wall Street has declined, and more importantly, after 2016, Wall Street can’t fix Trump…”

Di concluded: “But now we’re seeing Biden was elected [laughter]. The traditional elite, the political elite, the establishment, they’re very close to Wall Street. So you see that, right? Trump has been saying that Biden’s son has some sort of global foundation. Have you noticed that? Who helped him [Biden’s son] build the foundations? Got it? There are a lot of deals in all these.”

The question, then, is this: Will a government headed by Joe Biden and Kamala Harris be up to the ChiCom challenge? Or will they dismantle the strong national security foundations laid by the Trump administration to contain China — as they will likely do in the Middle East?

The answer: According to Di Dongsheng and any objective national security analyst, of course Biden and Harris will fold.

In the weeks before the 2020 election, one of the greatest frauds on the American electorate was the massive bulk-media cover-up of Biden’s ChiCom influence-peddling-for-profit scheme. It was the biggest corruption cover-up in election history, a clear case of collusion between the mainstream and social media, and their Democrat Party brethren.

Despite three years of fake allegations that Trump was in the Kremlin’s pocket, the October revelations about the ChiCom links to Joe Biden, via Hunter Biden, are direct, and the allegations are verifiable. The evidence affirms that the “Big Guy” was picking Beijing’s pocket — but with its full knowledge and complicity, and an understanding that he would thus end up in China’s pocket. 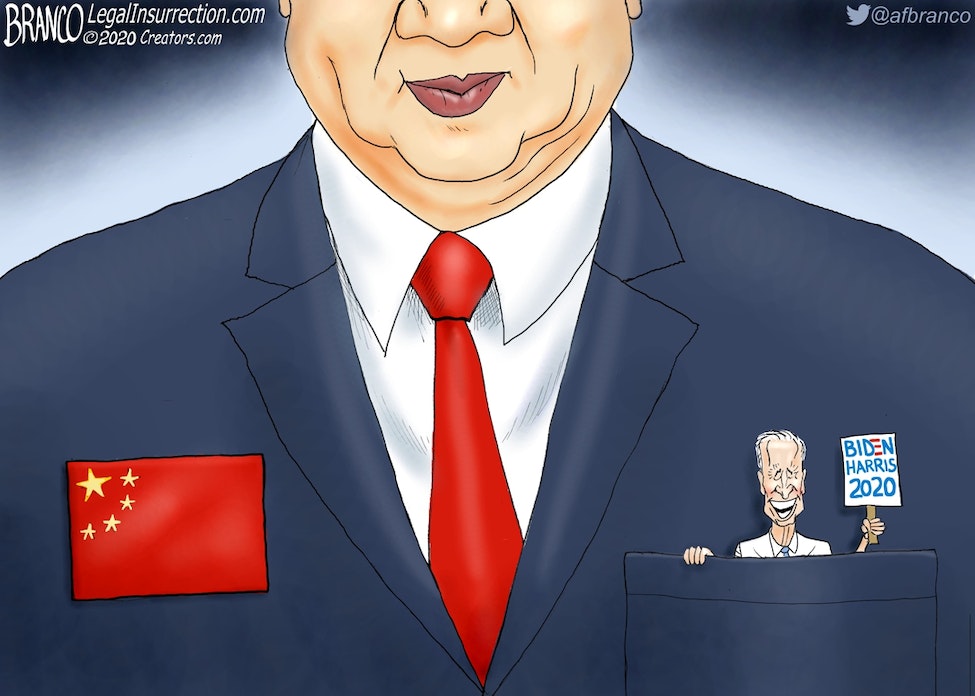 As Wall Street Journal editor James Freeman concluded ahead of the election, “Now the corruption story is about Joe, not Hunter.” But the story was subject to a media blackout like no other in American political history.

To ensure that a Biden regime can’t completely put a lid on the rest of the Demos’ deep-state corruption over the last four years, Attorney General William Barr notified Congress that he has appointed U.S. Attorney John Durham as special counsel. This enhanced status will give Durham additional powers and protections, which will make it far more politically difficult for Biden to simply make the investigation disappear. But it remains to be seen if that investigation will advance into Biden’s ChiCom corruption.

Make no mistake: The most forbidding existential threat to U.S. national security and our economy is Red China. Clearly, the ChiComs got the presidential candidate they bid on. Joe Biden and his leftist cadres of elitist pantywaists are not going to defend our nation against the greatest threat to Liberty in modern history.

Gordon Chang, a noted legal and national security analyst specializing on the ChiCom threat, notes that the Red Chinese “are going to push a President Biden around. They’re going to do things which are dangerous because we are going to have to push back. Under President Trump the Chinese did not try this because they were afraid of him.”

We’re on a kinetic-warfare collision course with China, because Biden is going to put us back on a course to lose the economic war with China.

Right now, manning the wall of Liberty is more critical than ever. But with our Creator’s divine guidance and your invaluable support, Liberty will prevail stronger than ever. As you know, our organization is entirely funded by American Patriots like you. If you’re able, please consider supporting our 2020 Year-End Campaign today to help ensure that our defense of Liberty is fully funded.