From humble beginnings to heroic service and ultimate sacrifice.

In recent weeks, I have written about the loss of two friends, T/Sgt. Charles Coolidge and Lt. Col. Chuck Hagemeister. They were members of, and strong advocates for, The National Medal of Honor Heritage Center here in Chattanooga — two humble men who saved the lives of many others on WWII and Vietnam battlefields.

It was with gratitude that I followed up those profiles with the welcome news that a 94-year-old Georgia native, Col. Ralph Puckett, was finally recognized for his service with a long-overdue Medal of Honor. He risked his life protecting his men in Korea.

We honor these men for the lives they saved on battlefields, and they will forever be held in high esteem among the ranks of our nation’s most distinguished veterans. The same is true for generations of Americans who have served our nation with honor and dignity, including those in my father’s Dartmouth class of ‘44, ALL of whom departed to serve in World War II — and many of whom never returned.

While we honor T/Sgt. Coolidge, Lt. Col. Hagemeister, and Col. Puckett, Memorial Day, as detailed in our Memorial Day tribute page, is reserved to honor those who have given their lives in the uniformed services of our nation — those who died in combat defending Liberty in accordance with their sacred oaths “to Support and Defend” our Constitution.

Regarding the three men aforementioned, I noted that the word “hero” is grossly overused today, but as it relates to Medal of Honor recipients, it is invariably understated.

And so it is with S/Sgt. Clifford Chester Sims, who was killed in action defending his fellow soldiers in Vietnam.

Sims began life as Clifford Pittman, according to a 2015 profile. He was orphaned at a young age. Though his stepfather’s family took him in, they couldn’t care for him. So he left their house and lived in an abandoned bus near Panama City, Florida, where he attended a nearby school. Clifford survived on the kindness of strangers.

According to his widow, Mary Sims-Parker, “We didn’t call it 'homeless’ then, but he was homeless before they came up with the term. He has a long story.”

At age 13, Clifford was adopted by James and Irene Sims, who provided him his first stable home. He and Mary, his high school sweetheart, were married in December of 1961, soon after he enlisted in the Army. He trained at Fort Jackson, SC, and the Airborne School at Fort Benning, GA, and then the 82nd Airborne Division at Fort Bragg, NC, before going to Ft. Campbell, TN, where he would ship out to Vietnam with the 101st Airborne Division’s Delta Company, 2nd Battalion, 501st Infantry “Raiders” — the “bastard company.”

It was a long road from tragedy to triumph, that ended in Hue, Vietnam, on 21 February, 1968. As his citation notes:

For conspicuous gallantry and intrepidity in action at the risk of his life above and beyond the call of duty. S/Sgt. Sims distinguished himself while serving as a squad leader with Company D. Company D was assaulting a heavily fortified enemy position concealed within a dense wooded area when it encountered strong enemy defensive fire. Once within the woodline, S/Sgt. Sims led his squad in a furious attack against an enemy force which had pinned down the 1st Platoon and threatened to overrun it. His skillful leadership provided the platoon with freedom of movement and enabled it to regain the initiative. S/Sgt. Sims was then ordered to move his squad to a position where he could provide covering fire for the company command group and to link up with the 3d Platoon which was under heavy enemy pressure. After moving no more than 30 meters S/Sgt. Sims noticed that a brick structure in which ammunition was stocked was on fire. Realizing the danger, S/Sgt. Sims took immediate action to move his squad from this position. Though in the process of leaving the area two members of his squad were injured by the subsequent explosion of the ammunition, S/Sgt. Sims’ prompt actions undoubtedly prevented more serious casualties from occurring. While continuing through the dense woods amidst heavy enemy fire, S/Sgt. Sims and his squad were approaching a bunker when they heard an unmistakable noise of a concealed booby trap being triggered immediately to their front. S/Sgt. Sims warned his comrades of the danger and unhesitatingly hurled himself upon the device as it exploded, taking the full impact of the blast. In so protecting his fellow soldiers, he willingly sacrificed his life. S/Sgt. Sims’ extraordinary heroism at the cost of his life is in keeping with the highest traditions of the military service and reflect great credit upon himself and the U.S. Army. 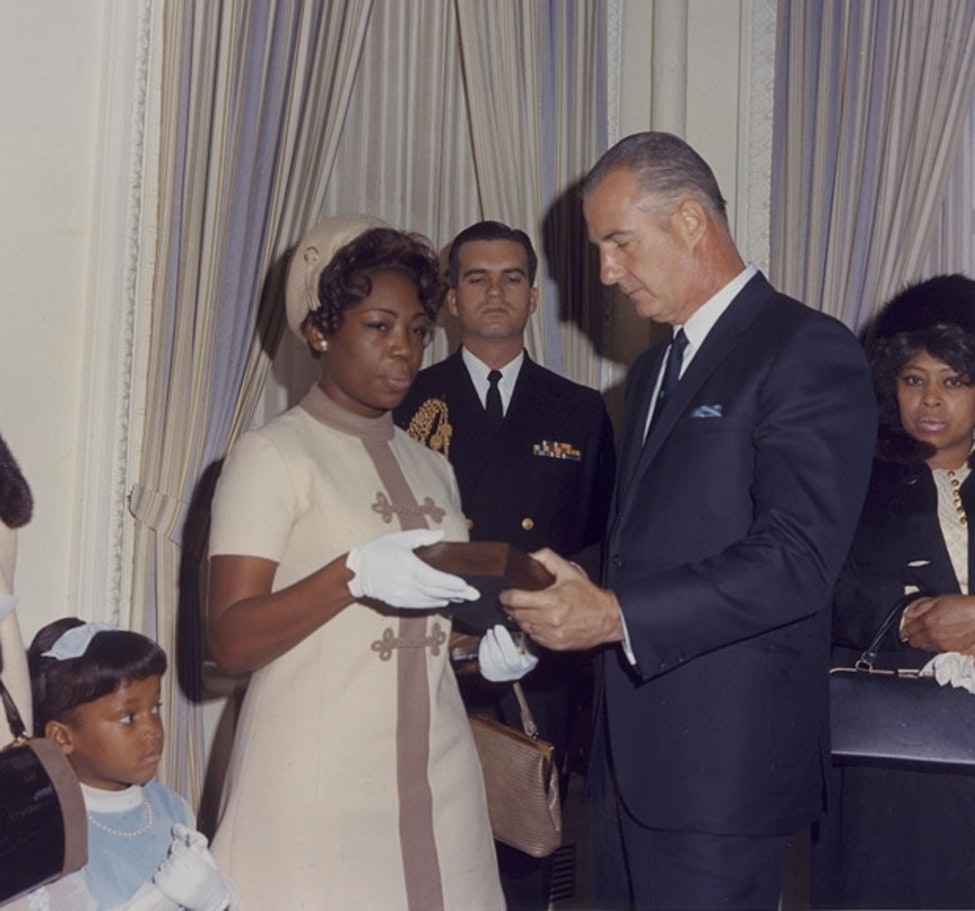 Of her impression of the Medal of Honor, Mary Sims-Parker said: “The first time I ever saw a picture of someone wearing the Medal of Honor, I was so in awe. I just looked and looked at it. It was just so amazing to see someone alive wearing one. I do treasure it so much.”

She added, “When I found out how [Clifford died], it didn’t surprise me.”

For his genuine heroics, S/Sgt. Clifford Chester Sims was posthumously awarded the Medal of Honor on 02 December 1969. Receiving it in his name, Mary keeps it in a shadow box on the wall in her modest home in Hopkinsville, KY.

“All gave some, some gave all.”

Thank you, Clifford and Mary Sims.

Too many Americans, oblivious to the service and sacrifice of others on their behalf, will “celebrate” Memorial Day as any other holiday. Too many commercial vendors will use the day to promote sales.

But Memorial Day is not for sale. More than 1.3 million American Patriots have already paid the full price in combat, and an additional 1.4 million have been wounded. These numbers, of course, offer no reckoning of the inestimable value of their service or the sacrifices borne by their families.

In 1776, John Adams wrote his wife Abigail of the cost of defending Liberty: “I am well aware of the Toil and Blood and Treasure, that it will cost us to maintain this Declaration, and support and defend these States. Yet through all the Gloom I can see the Rays of ravishing Light and Glory. I can see that the End is more than worth all the Means.”

Indeed, and that cost continues to be borne today by our Soldiers, Sailors, Airmen, Marines, and Coast Guardsmen serving around the world.

(This is the 100th anniversary year of the first interment of an unknown soldier at Arlington National Cemetery. Please visit our page dedicated to the Tomb of the Unknowns.)