Did you know? The Patriot Post is funded 100% by its readers. Help us stay front and center in the fight for Liberty and support the 2022 Independence Day Campaign.

Honoring the Service and Sacrifice of Those Who Have Earned It

“Never take for granted the people God places along your path.”

Gratitude: The quality of being thankful; readiness to show appreciation for and to return kindness.

The word “gratitude” appears frequently in columns I have written over the last 25 years. In a recent column, I noted that, despite all the divisive noise from the Beltway babblers, there is much good and right about our great nation. All one need do is look around.

I start every day understanding that gratitude shapes my attitude, and there is no better way to recenter on what is good and right, especially in moments of trouble, than to focus on the many blessings, large and small, for which I am grateful.

One of the great privileges of my job, and at the same time the most humbling, is the opportunity to write about others who are serving, or have served, in our nation’s Armed Services — those who have abided by their solemn oaths “to support and defend” the American Liberty enumerated in our Declaration of Independence and enshrined in our Constitution.

There are four days on which I dedicate columns to such service: National Medal of Honor Day (March 25th), Armed Forces Day (third Saturday in May), Memorial Day (Last Monday in May), and Veterans Day (November 11th). We also recognized the establishment dates (the birthdays) of each of the service branches.

On the third Saturday in May, millions of American Patriots, especially those of us who understand the price paid for the Liberty we enjoy, pause to honor those who are securing it for us every day. Armed Forces Day is an opportunity to express gratitude due the Soldiers, Sailors, Airmen, Marines, and Coast Guardsmen serving our nation, active duty, reserve, and guard.

“I am well aware of the Toil and Blood and Treasure, that it will cost us to maintain this Declaration, and support and defend these States. Yet through all the gloom I can see the rays of ravishing Light and Glory. I can see that the end is more than worth all the means.” —John Adams (1776)

Ahead of Armed Forces Day this weekend, I’m mindful of some very good advice I received many years ago from my friend Cal Thomas: “Never take for granted the people God places along your path.”

Since then, I’ve heeded that advice with ever-greater regard, and as a result have developed rich and treasured relationships with many veterans nationwide who have served our nation with honor, humility, and dignity.

Our family’s Patriot warrior ancestry begins with those who fought with John Sevier’s Overmountain Men at Kings Mountain. Those early veterans turned the tide of the Revolutionary War, and their legacy extends through the generations to my father, a WWII naval aviator, and now to our son, who today is a Marine infantry officer.

For that reason, I hold in high esteem those along my path who also have been willing to sacrifice so much in the service of others.

And it is with an equal sense of gratitude that we honor our son’s wife, and all the spouses and families of our military personnel who also sacrifice greatly in support of our nation.

“There is a certain enthusiasm in liberty, that makes human nature rise above itself, in acts of bravery and heroism.” —Alexander Hamilton (1775)

Moreover, I have the pleasure of serving on the national board of advisors for the National Medal of Honor Heritage Center, under the able leadership of one of those aforementioned friends, retired Army General B.B. Bell. In that capacity, I’ve met many members of our nation’s most exclusive fraternity — those military personnel whose courage under the most extreme of circumstances has earned them our nation’s highest military award for valor.

I mention this because the Heritage Center is located here in Chattanooga, where the first Medals of Honor were awarded for the actions of Andrews’ Raiders in 1862. That heritage is infused in our city’s history, and for that reason, we host the longest continuously running annual Armed Forces Day Parade in America — just completing the 73rd of those parades.

Not many folks are blessed to live in cities and states where the legacy of honoring service personnel is so deeply engrained.

Looking through the archival history of our past celebrations, I came across a photo I wanted to share with you — that of the Grand Marshals of the very first parade: Regional WWI and WWII Medal of Honor recipients Sergeant Alvin C. York (driving the jeep), whose life story was immortalized in the film “Sergeant York,” and in the back, left to right, Sergeant Major Paul B. Huff, Sergeant Charles H. Coolidge, and Sergeant Raymond H. Cooley.

What a remarkable concentration of valor and patriotism in that vehicle.

Fellow Patriots, let us thank God each and every day for our great nation, and especially for those Patriot citizen soldiers who are defending it, and their families. 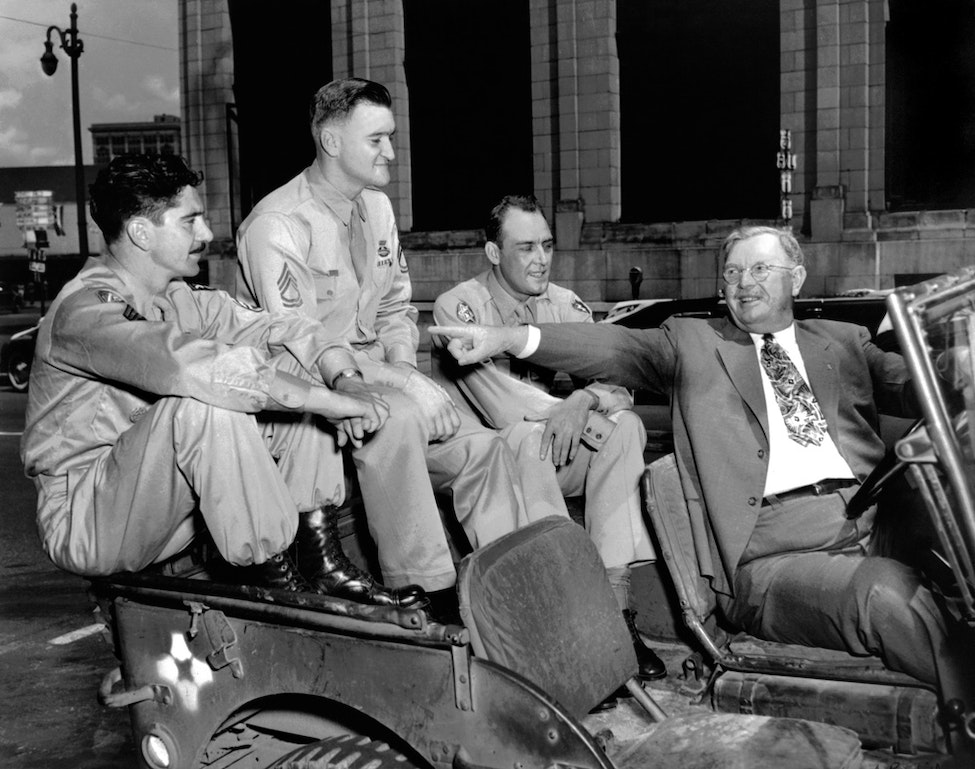 PS: The The Patriot Post’s military mission of service includes Operation Shield of Strength, through which we have now distributed more than one million Joshua 1:9 dog tags to military personnel and family support groups: “Be strong and courageous. Do not be afraid; do not be discouraged, for the Lord your God will be with you wherever you go.” Visit The Patriot Shop, which carries an extensive collection of the highest quality official military insignia products. The proceeds from all Patriot Shop sales support our military mission of service.

Caught in the Crossfire — Women After Abortion

‘It Only Hurts for a Minute…’